The journal Academy of Management Perspectives published an interesting article in 2009 entitled "Is the socially responsible corporation a myth? The good, the bad and the ugly of corporate social responsibility." In it, the author examines whether the conflicted nature of corporations perhaps makes spurious the notion that corporations be an instrument of public policy.

Corporate Social Responsibility (CSR) is a bit of an ill-defined concept. A workable definition might well be something like a management strategy whereby organizations take responsibility for their impact on society and the environment. From a labour perspective, this might include focusing on eliminating health risks from production to workers and from products to customers.

The real question is whether CSR is more than just window dressing. In a fairly even-handed manner, the article's author concludes there is little empirical evidence or logical reason that corporate behaviour will be socially enhancing. Further, he notes that social responsibility is a contested concept (one open for colonization by corporations) and that corporations must make difficult trade offs when they act in socially responsible ways.

These limitations reflect the corporations exist to optimize for themselves, rather than for the general public. An interesting line of analysis is corporations use of CSR as a competitive weapon to monopolize a sector. In short, agreeing to CSR environmental or employment standards of practice may make entry to new firms (or the existence of smaller firms) financially untenable.

Two books provide some useful insight into this issue. Harry Glasbeek's 2002 book Wealth by stealth provides an analysis of the corporate form and its implications for society. Glasbeek takes particular pains to outline the anti-social and criminal behaviour endemic in the corporate form.

David Michael's 2008 Doubt is their product is a damning account of how corporations have hidden the health effects of products and production from consumers and workers. It does a particularly good job of examining the decades-long manipulation of occupational health research in order to delay and derail regulation of hazard substances. I like to think of myself a suitable jaded, but Michael's book was, frankly, shocking to read.

While I don't want to be reflexively dismissive of CSR, the evidence that corporations act in socially irresponsible ways in order to achieve their goals is difficult to dismiss. And it sheds light on contemporary topics such as the recent dust-up between Bee-Clean Cleaners and their largely immigrant workers.

“Albertans have the right to know the injury record of who they are working for. We hope that making this information public will encourage employers to commit to even better health and safety performance.”

So does this database allow workers to see the injury records of their employers? My colleague, Jason Foster, does not think so:

"As one example, I requested all employer reports in Residential Construction, one of the more dangerous industries. 503 employers came up. We know that four fatalities and 325 injury claims were reported from this industry in 2009. However, not a single employer in the report was recorded as having a fatality or even an injury. Where are the deadly phantom employers? Why do their records not show up?"

The Alberta Federation of Labour has done a similar analysis:

- Clayton Construction Limited is facing seven charges, laid September 2, 2010, for an alleged offence involving a fatality on September 2, 2008. A search on the new site came up with "no results found."

-Canadian Natural Resources faces two charges from the same fatal event. The same company has also been charged in relation to three other fatalities and three injuries - or six of the 31 active charges (20 per cent) listed by Employment and Immigration. A search of the new site brings up three records for the company, two of which have references to Lost Time Claims (LTCs) in 2008, and LTC rates marginally above the rates for the industry, but no reference is made to the fatality or charges.

-Central Alberta Well Services Corp. faces five charges for an alleged offence on August 26, 2008. A search on the new website results in a dizzying array of eight records for the company, under varying Industry Name segments, each giving different Lost Time Claim statistics."

These analyses raise very difficult questions about the quality of the data the government is using. They also raise serious questions about whether the database fulfills its official purpose: allowing workers to determine their employer's injury record. It will be interesting to see if the three workers killed in as many days this weekend, show up in the statistics for next year.

It has been an interesting summer for occupational health and safety in Alberta. A Calgary Herald series highlighted ineffective workplace fatality prosecutions. And the provincial auditor general also issued a critical report. This was followed by turnover among senior OHS bureaucrats.

One of the government's responses was to resurrect the publication of employer injury records. Despite criticisms that the information released was misleading and incomplete, the government went ahead and put this information online.

In the wake of this, some old adversaries have popped up to spar. Former Minister of Employment and Immigration Clint Dunford praised the release of lost-time claim data on most Alberta employers. And former director of policy for the Alberta Federation of Labour Jason Foster (who is now my colleague) responded, with a fairly damning list of deficiencies in the new system.

Unable to get ahead of the safety debate, the government is now hauling out a second idea from 10 years ago: ticketing of OHS violations. This is a very interesting debate because of how ticketing can shape the perception of who is responsible for workplace safety.

A recent study in the British Journal of Criminology entitled "The Regulation of Corporate Violations: Punishment, Compliance, and the Blurring of Responsibility" examines ticketing in Ontario. Its conclusion is that:

"This regulatory shift has resulted in a diffusion of responsibility for safety risks as workers have increasingly become individually responsible for enforcing regulation as well as a target of regulation. In essence, workers are being transformed from a victim to a health and safety offender."

In effect, ticketing can serve to blame the victim. On the other hand, if employers are the focus of ticketing, then ticketing stands a good chance of altering their behaviour. This is particularly true of small employers for whom a fine would be a significant penalty. It also creates a penalty for violations that do not result in injuries. Presently, injury-violations are the only ones that trigger any penalty, and even these do so infrequently.

Janitors fight back at U of A 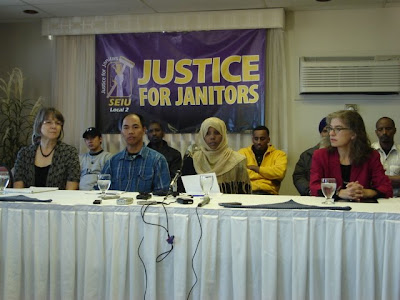 An interesting story is developing out of the University of Alberta. A group of janitors employed by Bee Clean Building Maintenance (which is under contract with the university) has taken a number of steps to protest what it believes is unfair treatment:

1. The employees, with the assistance of the Service Employees International Union, has filed civil suit against Bee Clean for over $42,000 in unpaid wages.

2. The SEIU has filed an unfair labour practices complaint with the Alberta Labour Relations Board alleging Bee Clean has violated the provisions of the Labour Relations Code precluding employer interference with the formation and administration of a trade union.

Temporary foreign workers (TFWs) routinely face violations of basic employment right. In 2009, 74% of employers employing TFWs inspected by the province were found to be in violation of the Employment Standards Code. Half of these violations were for not paying workers properly. In a bizarre bit of spin, Employment and immigration Minister called these stats good news:

So why then have the janitors chosen civil action over seeking payment for unpaid wages through the Employment Standards Code process? A part of the issue may be the limited reach of employment standards. Section 90 only allows employment standards complaints to go back six months from the date the order for back pay was issued on.

Practically what the means is that an employee files a complaint. It takes awhile for the complaint to be investigated and an order issued. A cagey employer will correct the illegal behavior when the complaint is filed and then stall the investigation. This stalls the issuance of an order (which crystallizes the six-month retrospective period) and thereby reduces the owed backpay by dragging out the proceedings.

The 2005 review of the Employment Standards Code identified this as an issue to be fixed by crystallizing the six-month period on the date of complaint. Despite spending hundreds of thousands of dollars in staff time and on consultants (including yours truly) the government shelved the recommendations from the review and this issue never got addressed.