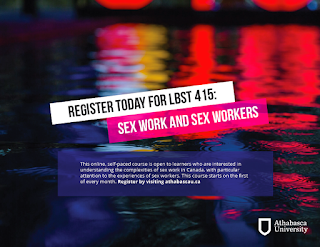 After more than a year of work, LBST 415: Sex Work and Sex Workers is now open for registration, with new intakes on the first of every month. This course examines the operation and regulation of sex work in Canada.

The course focuses on the experiences of sex workers—often told through their own writings—to identify how the structure and regulation of the sex industry affects them. This includes examining how sex workers experience exploitation and exert agency over their lives at the same time.

Of particular interest is how different jurisdictions approach regulating sex work. These very different approaches result in better and worse working conditions as well as shape the relationships between sex workers and law enforcement, managers, and clients.

This course is not for the faint of heart. But if offers students in labour studies, women’s and gender studies, or sociology with an opportunity to explore this very interesting intersection of work and sex. 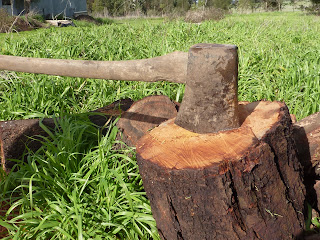 Two weeks ago, a friend and I were kicking around labour’s response to the Kenney government’s series of attacks on workers’ rights. In no particular order, they include:
The question we wrestled with was whether these actions were business as usual for conservative governments (resulting in perfunctory union resistance) or if (perhaps together) they represented an escalation that would trigger a significant response from labour.

The basic deal underlying modern labour relations is that (1) employers agree to bargaining in good faith with unions and (2) unions agree to limit strikes to small, predictable windows. This all gets codified in labour law that the state administers.

The state isn’t, of course neutral, being both an employer itself and beholden to capital. And there are many examples of governments having bigger or smaller goes at organized labour (Klein, Harris, Redford, but cf Harper and Ford). For the most part, though, conflict tends to be episodic, contained and relatively muted (quiet cooperation is actually the norm). This reflects that governments are interested in social stability. (More recently, Charter-based restrictions on what they can get away with in the medium term).

Unions generally cooperate with governments because there are organizational benefits to doing so and penalties to resisting. In practice, there is a degree of mutual accommodation, worker demands tend to be monetized, and the union manages any worker discontent. (These dynamics are described by labour scholars as incorporation, economism, and bureaucratization.)

When governments pick fights with unions, this can embolden the more radical voices with unions. Union often act to manage demands for overt conflict by emphasizing communication-based responses and seeking to reign in direct job action.

Union responses to Kenney’s recent series of attacks have been a bit different. There certainly has been an air war, but unions are also investing resources in developing the capacity of their members to take direct action against their employers (whether the government or a government-appointed agency, board or commission).

It is an open question whether Alberta unions have any real appetite for worker-directed job action (e.g., sick outs, over-time strikes, wildcat strikes). My friend correctly noted:
I countered that unions are spending resources to develop the member infrastructure necessary for direct action. This suggests that unions (1) see direct action as a viable counter-weight (although perhaps more as a threat, than a weapon), and, (2) by mobilizing members, must be prepared to accept whatever risk of unplanned job action that accrues from having mobilize members. (I'd had a lot of coffee at this point and was maybe a bit amped up!)

Obviously, labour is not monolithic. Different unions (and even different locals within one union) can approach matters differently. For example, Alberta’s faculty associations have very different takes on how to proceed in the face of funding cuts and expected rollback demands. These sorts of tensions enable the government to pick off the weakest unions and reduce the size of the strike threat.

So far, the Alberta Union of Provincial Employees, the Health Sciences Association of Alberta, and the Canadian Union of Public Employees seem to be talking the toughest. I’ve no sense of where the United Nurses of Alberta are on job action. They have hired organizers and they are fighting with the government in court. But I wonder about the organization’s willingness to strike illegally. The willingness of the teachers to resist (they have taken 6 zeros in 7 years) is also an open question.

A different way to look at this question is how far is the Kenney government prepared to go to achieve whatever its goals might be? The harder the government pushes, the greater the risk that it will end up triggering profound social disruption (e.g., workers walk out). What this would achieve is a bit of  mystery. Perhaps it could be used as a pretext for radical revision of the basic deal that underlies labour relations (although it's not clear who that benefits). Perhaps it is simply ideological or a distraction from some other project.