A week ago, a coalition of groups released a report addressing shortcomings in Canada’s existing Caregiver Program. This program brings foreign nationals to Canada to work on a temporary basis providing care for children, the elderly and persons with disabilities. After 24 months of work, the caregivers can then apply for permanent residency.

The existing Caregiver program is set to expire in November of 2019. The coalition identifies a number of issues with the current program:
The report also contains recommendations for actions and is well worth a read.

The key issue is that AU continues to advance a two-year wage freeze and an aggressive set of language rollbacks. For context, every other public-sector agreement in Alberta has settled for two zeros, a wage re-opener (or an increase) in year three, and language improvements for the union.

AUFA has recently polled its members on AU’s proposed language rollbacks. The questions asked whether members supported giving AU the power to:
These results indicate AUFA members will not ratify any agreement that contains these proposals. In short, the only way AU may (or may not) be able to achieve these rollbacks is by locking out AUFA members.

A work stoppage is in no one’s interest and AUFA remains hopeful that a new collective agreement can be negotiated. But, AU insisting on unnecessary rollbacks when it is flush with cash is unacceptable and will eventually result in work stoppage. As of this week, AUFA has completed its preparations for a work stoppage.

The costs of AU locking out AUFA will be substantial and include operational disruptions, lost revenue, and profound reputational damage with students, donors, and the government.

A way to avoid an entirely unnecessary work stoppage is for AU to drop its unreasonable demands and propose a collective agreement more in keeping with the public-sector pattern.

Now would be the time for AU’s Board to re-evaluate the approach taken by its bargaining team and make a realistic proposal for settlement.

In June, Alberta released its departmental annual reports. You can find the Alberta Labour report here. Alberta Labour administers and enforces Alberta’s employment laws. Here are the highlights from 2017/18.

Overall, performance declined over last year. According to the report, this is largely due to staff being redeployed to implement new workplace rules. 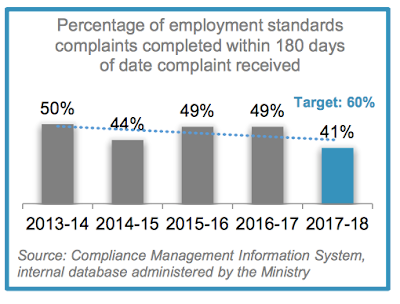 The good news is that Alberta reported it employed 75 employment standards officers, an increase of 23 since the New Democrats took office in 2015. An additional 38 staff (mostly officers) are expected to be hired this year. Further staffing increases are likely warranted.

Overall, things appear to have improved over last year. The number of hearings is up (reflecting expanded powers and new rules). 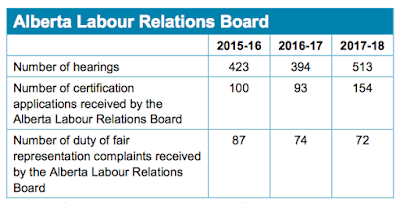 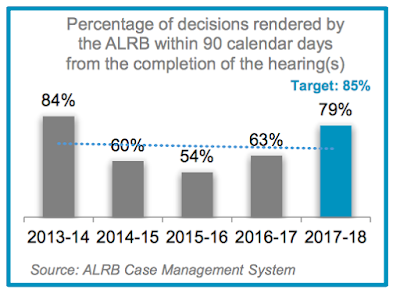 The speed from application to first hearing has increased (likely due to new statutory requirements). There has also been a significant improvement in the speed of decisions.

Overall, things are better than last year. Alberta’s ~140 OHS officers inspected 11,752 workplace inspections in 2017/18 as well as conducted over 5076 follow-up visits. This is a significant increase in inspections and a good sign. 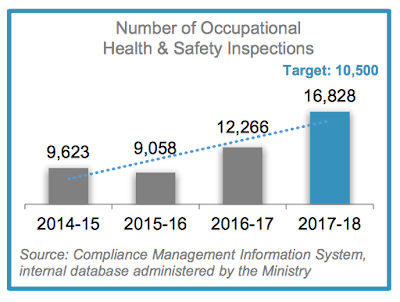 Inspectors wrote almost 11,000 OHS compliance orders while prosecutors laid 26 charges for OHS violations in 2017/18. Again, both numbers are up and are good signs. That said, inspectors are still only visiting about 4% of employers annually so the risk of getting caught breaking the rules remains low and the consequences (mostly “fix it”) are modest.

Here, things seem to be a bit worse, with both the lost-time claim rate and the disabling injury rate climbing. These jumps may (at least, in part) reflect internal changes in the WCB as it attempts to change its culture of denial. They may also reflect an increase in economic activity in dangerous sectors. 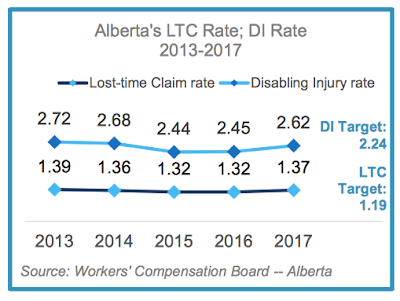 While rates allow year-over-year comparisons, they tend to obscure is the actual number of injuries. In 2017, the WCB accepted 29,047 lost-time claims. I wasn’t able (yet) to find data on disabling injuries for 2017 (45,000 is a good guess). I did find this infographic on fatalities: they appear to be climbing in 2018. It is important to acknowledge that WCB claims data tends to significantly under-represent the true level of injury. 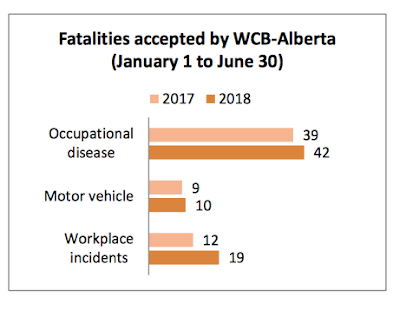 Overall, Alberta Labour’s performance seems to be modestly improving. That said, additional staff will be necessary to reduce the level of wage theft and injury.

This week’s instalment of Labour & Pop Culture explores the issue of discretionary effort and the wage-effort bargain. Basically, every job has components that are voluntary—where workers go above and beyond what is required because they are intrinsically motivated to do a good job.

Discretionary effort is one part of the wage-effort bargaining—how hard employees will work given prevailing wages and working conditions. When employers change wages or working conditions, this often violates the psychological contract employees have with their boss.

The clip above (from Christmas Vacation) humorously illustrates how workers view such violations. A violation, in turn, can trigger a re-evaluation of the wage-effort bargain and perhaps a reduction in discretionary effort.

Which brings us to today. Athabasca University is being pretty terrible to its faculty members at the bargaining table. There isn’t much individual workers can do in terms of withdrawing their labour without engaging in an illegal strike. But we can individually withdraw voluntary services.

For me, that is the Labour & Pop Culture component of this blog. These posts have always been something I did on my lunch hours to add some levity to the more serious posts I make about labour issue (which stream into my courses for pedagogical purposes).

I just can’t justify doing extra work for an employer that talks about respect and then advances proposals like company doctors. So I've decided to start actually taking my lunch hour. I hope you’ve enjoyed this series as much as I have enjoyed offering it.

Last week, I shared a preliminary analysis of the arguments and discursive strategies used by business lobby groups to oppose the minimum wage. This week, I’d like to wrap up this series by examining the narratives and strategies used by organized labour to support the increase.

I found 9 statements by the Alberta Federation of Labour (AFL). I selected the AFL because it is a labour central representing 29 unions tat, in turn, represent approximately 175,000 workers.

There is a considerable and growing body of evidence showing that the negative economic effects of minimum wage increases are negligible, while the impact of lower-income people having more money in their pockets is quite considerable. The evidence ranges from a classic 1990 study by researchers David Card and Alan Krueger; a 2010 examination of fast-food restaurants; to the 2014 British Low Pay Commission, which concluded “minimum wages boost workers’ pay, but don’t harm employment.” (AFL, 2015, p. 1)

A: That’s what they want people to believe. But the track record of some of these employers and lobbyists suggests they’re much more interested in keeping wage low than in creating and maintaining jobs. These are the same guys who always say the sky is falling whenever any provincial government even whispers about increasing the minimum wage. And, in many cases, they’re the same people who made extensive use of the Temporary Foreign Worker Program (TFWP) to displace Canadians and keep wages artificially low. After years of focusing on self-interest, why should we believe they’re suddenly concerned about the public interest? (AFL, 2016b, p. 3)

While government MLAs and the AFL both used similar narratives about minimum wage increases discursive strategies, the difference in tone creates a sword (AFL) and shield (MLAs) dynamic. There is no clear evidence of coordination between the government and the AFL and this dynamic may simply reflect independent and rational communication choices by each party. The small number of statements in the dataset suggest that this analysis should be treated with caution.

My research project on this topic is now turning to analysis of the media coverage of Alberta’s minimum-wage increase—something I expect will take a few months to complete. Comments on this research are welcomed.

Most representations of unions in television and movies centre on picket-line conflict or union corruption (both compelling plot lines). Less often do you see a more nuanced view of unions or work stoppages.

I recently ran across an old Seinfeld episode that I had forgotten about, where Kramer gets news that a strike at his workplace (which apparently had been going on for more than a decade) was resolved. He then tries to return to work (where no one has ever heard of him).

The underlying lesson in this clip is that unions generally don't win protracted job actions (workers lose interest, employers learn to cope with the strike or close up shop). What that suggests, strategically, is that a short strike with catastrophic disruption of employer operations is a union's best shot at a quick and decisive win.