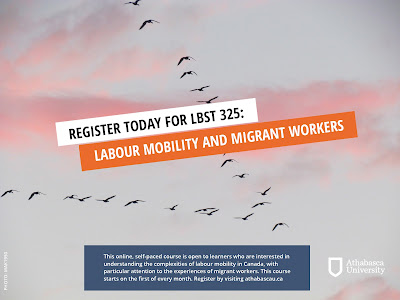 LBST 325: Labour Mobility and Migrant Workers examines various forms of labour mobility and how they affect workers, their families, and the sending and receiving communities.

The course draws upon research done by scholars associated with a recently concluded SSHRC grant (On the Move) with an emphasis on labour mobiilty in western Canada.

Alberta Labour and Immigration’s annual report for 2019/2020 is now available online. Here are the highlights of the employment standards and occupational health and safety sections. The most interesting item is the 96% drop in OHS tickets issues in the past year. 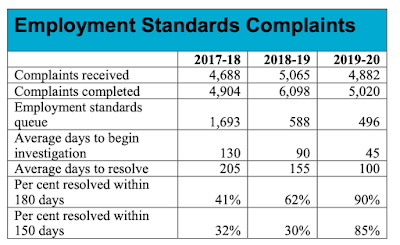 The number of employment standards complaints was pretty static but there were significant improvements in complaint processing times. That said, it still takes an average of 45 days for a complaint investigation to begin, which isn’t great if your employer just scooped your wages or fired you without notice or pay in lieu.

Interestingly, the number of anonymous tips jumped a lot (about 10% of these tips were investigated). There was also a significant percentage jump in workplace inspections. That said, the overall percentage of workplaces inspected remains very, very low.

Workplace inspections were down about 20% this past year. Fewer inspections is attributed to pulling staff from frontline duties to train new OHS officers (really?) and a new system whereby employers can pinky swear that they fixed problems and avoid a re-inspection (eye roll). Orders written and unique worksites visited were also down. 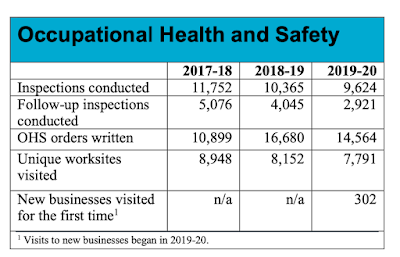 In terms of enforcement, 22 tickets were issued in 2019/20 (15 of which went to employers). Although the report doesn't mention it, this was down from 479 tickets in 2018/19. Hmmmm. This 96% drop in tickets cries out for explanation. At a guess, I’d say inspectors were told to stop issuing tickets because ticketing is up for review in 2020/21. Issuing virtually no tickets creates ”evidence” that this form of penalty is unnecessary and thus can be done away with as “red tape”.

Five administrative penalties were also issued to employers. Again, not mentioned is that this was down from 14 in 2018/19. Complaints of discrimination for exercising OHS rights were up this year (90 versus last year). Five of these were upheld, 23 were dismissed, and 62 remain under investigation. OHS charges were up, however, from 16 to 18 this year. This is a very low number given the number of injuries and fatalities.

While injury rates are not very good measures of injury due to massive under reporting, they do offer a year-over-year measure. Overall, both lost-time and disabling injury rates were stable in 2019 but were higher than they were in 2015. There were 129 fatalities accepted by the WCB in 2019—about the same as the year before.

My wife flagged this 1993 song by Mary Chapin Carpenter as labour related. It traces the journey of a women who, at 36, opts to leave her marriage and role and primary caregiver to re-enter the workforce.

Most of the song chronicles the unpaid, social reproductive labour that the women does. It is interesting to see this work treated so explicitly as both skilled and demanding labour. And yet these skill have little market value when she decides to rejoin the paid workforce. It also nicely tease is out the often hidden power dynamics of one-income marriages.

I’m not a huge fan of the new country era, but the backup singers on this video are are pretty amazing. Trisha Yearwood, Emmylou Harris, and Patty Lovelace, to name a few.

She makes his coffee, she makes his bed
She does the laundry, she keeps him fed
When she was twenty-one she wore her mother's lace
She said, "forever," with a smile upon her face

She does the carpool, she P.T.A.'s
Doctors and dentists, she drives all day
When she was twenty-nine she delivered number three
And ev'ry Christmas card showed a perfect family

Ev'rything is so benign
The safest place you'll ever find
God forbid you change your mind, he thinks he'll keep her

She packs his suitcase, she sits and waits
With no expression upon her face
When she was thirty-six she met him at their door
She said, "I'm sorry, I don't love you any more"

Ev'rything is so benign
The safest place you'll ever find
God forbid you change your mind, he thinks he'll keep her

If you are looking for an interesting historical dramatization to fill you winter evenings, Amazon Prime is presently offering Good Girls Revolt, a 10-episode miniseries set in 1969 and 1970 at Newsweek Magazine.

Amazon cancelled the show after one season. But what a season it was! The show is based upon a book the chronicles a sex discrimination lawsuit by female researchers at Newsweek.  The researchers are exploited horrendously, often being more qualified and better writers than the male reporters, but paid a fraction of their wages and denied credit.

The most interesting part of the show is how it documents what is essentially an organizing campaign by the women to assert their rights. I can’t think, off hand, of another mainstream series that follows an organizing campaign over time. Usually collective action is framed as spontaneous or the result of a long-standing power base.

In Good Girls Revolt, we get to see a group of workers create a new power base in a workplace. This includes recognizing and articulating their interests and how they differ from the interests of other workers (the men). It also engages how race and class can affect solidarity within a group. The character’s flaws and mis-steps are also realistically portrayed.

I recently had the… opportunity?... to watch a few episodes of CBC’s Frankie Drake Mysteries series. The series centres on an all-female detective agency in 1920s Toronto (so kind of a flapper lady Matlock dealie). The series is available on Amazon Prime but perhaps also the CBC website.

Episode 2 of the first season (“Ladies in Red”) sees Frankie hired to investigate an attack on a factory owner. The owner is convinced the attack was the work of communists in his plant (that manufacturers some kind of confusing glass window product). The show makes reference to the 1919 Winnipeg strike as well as the 1920 Wall Street bombing (which may have been the work of Italian anarchists or communists… or maybe not) to explain the owner’s concerns.

The detectives’ investigations turns up a group of communists (or red sympathizers) in the plant. But their interest is mostly in world peace and perhaps in better working conditions. There is a subplot around sexual harassment and, in the end, the real villain in the plant manager who is skimming, sexually exploiting, and trying to deflect blame onto the workers.

If you can get past the many inconsistencies (e.g., the show is pretty race blind until race is a useful plot point) this episode has a positive portrayal of collective action by workers and highlights the plight of working women in urban Canada after the first war.

I have to admit, by the end I was on my phone googling. But my impression is that the episode ends with Frankie cajoling the plant owner into raising the women’s wages. This seemed very out of character and pretty Pollyanna.