Two protests in the next few days

Over the next few days, there are a couple of interesting labour-related events in Edmonton. On Sunday, March 2, there will be a protest at Winston Churchill Square over the government’s recent attack on public-sector pensions. 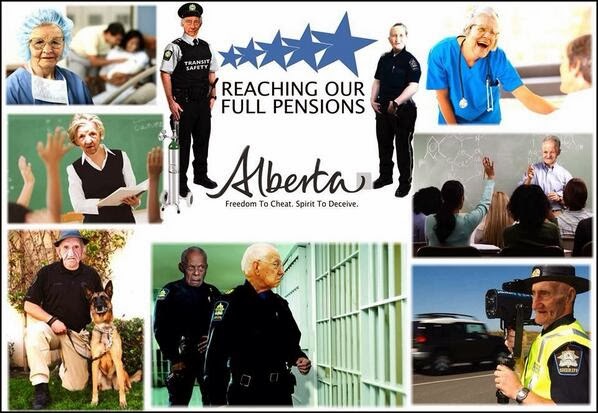 On Monday, March 3 the group Canadians Against the Temporary Foreign Worker Program will be hosting a protest at the Legislature reflecting ponds at 9 am. The Legislature steps are apparently booked for the same time for something official, which could make for an interesting collision of messages. 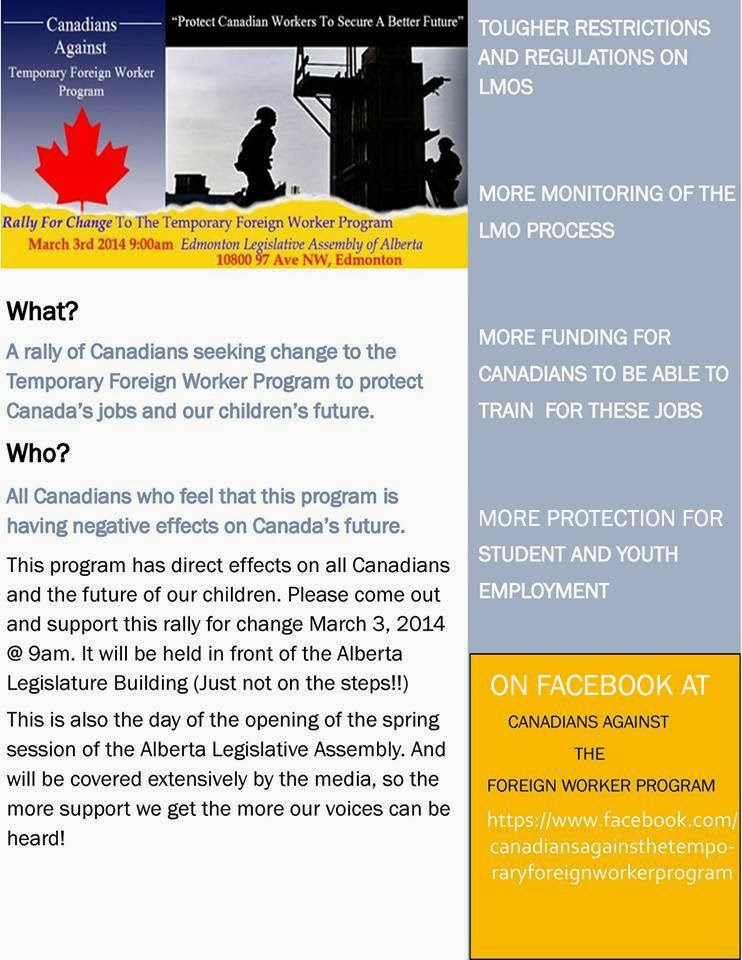 As far as I can tell, CATFWP is a grassroots group of folks who are concerned about the erosion of job security and working conditions given employers’ greater ability to replace Canadian workers with foreign migrants. There also appears to be some folks concerned about the treatment of foreign workers with a very slight leavening of xenophobes. Quite an interesting Facebook group to follow.

Freezing public-sector wages by returning the right to strike

On Valentine’s Day, Justice Denny Thomas granted an injunction that effectively suspends the operation of Bill 46 indefinitely. Bill 46 is the Redford government’s effort to legislate a wage freeze for Alberta’s 22,000 civil servants effective March 31. My favourite part of the decision is this:

[65] …Alberta did not meet its obligation to negotiate in good faith. The timeline and events prior to consideration and passage of Bill 46 are interpreted by me to conclude Alberta never intended that the 2013 negotiations with AUPE were to be meaningful.

The Public Service Salary Restraint Act was passed by the Legislature with the intention of getting AUPE back to the negotiating table, and that has happened.

No reasonable person could reasonably conclude that Bill 46 was designed to bring AUPE back to the table. Indeed, Justice Thomas, who presumably had all of the evidence the government could muster, concluded that negotiations were still ongoing when Bill 46 was enacted:

[57]… Negotiations between AUPE and Alberta were ongoing when Bill 46 was tabled and passed. I do not accept Alberta has proven that an “impasse” had emerged and therefore a legislative response was appropriate.

Bill 46 was really about freezing the wages of civil servants. Wage-freeze legislation is all the rage with conservative governments these days. But I wonder if, somewhat counter intuitively, the government wouldn’t be better off to return the right to strike to civil servants if they really want to hold salary increases at zero.

My thinking is this. If civil servants have the right to strike, then the government can stone wall at the bargaining table indefinitely (thereby denying any increases). This state of affairs continues until the workers force the government to cough up some cash by striking. My guess is that civil servants would be unable to bring that kind of pressure to bear on the Tories.

Yeah sure, for the first few days of a public-sector strike the public might be behind the workers. But eventually the public will realize that civil servants actually do pretty important things (“hey, why is no one tranquilizing that moose in my backyard?” “hey, why is no one getting me the pay my employer illegally deducted?”) and support for the strike would turn to dismay about the disruption.

Absent public support, there is really zero pressure on politicians to settle a public-sector strike. They have provisions in the Labour Relations Code for public emergency stuff (e.g., keeping ERs open and the lights on). But if the tide turns against the workers, politicians can actually make hay letting the workers walk the line. And save even more money through foregone wages.

Returning civil servants the right to strike would be a much more honest way to hold wage increases at zero than bargaining in bad faith, concocting unconstitutional wage-freeze legislation and trying to pretend that behaviour is anything other than a dirtbag move. 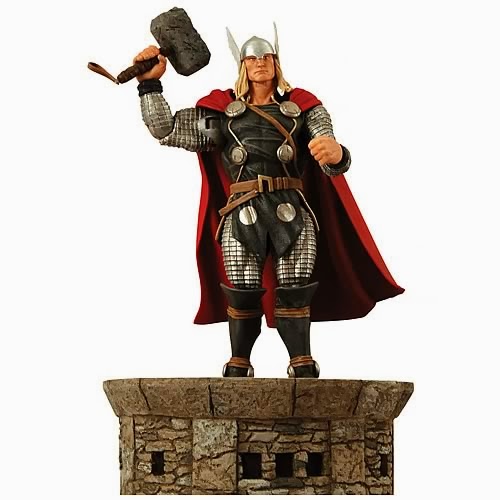 Nearly two weeks ago, Minister of Jobs, Skills, Training and Labour Thomas Lukaszuk indicated that the OHS “hammer is out is out again”. Lukaszuk was responding to a pair of stories showing (1) a near-record 188 workplace deaths in Alberta in 2013 and (2) OHS inspectors has issued no tickets or administrative penalties. To round out the picture, it is useful to know there were only 5 successful OHS prosecutions in 2013.

A reader passed onto me some comparative data from the UK. It is obviously important to compare apples to apples so I have tried to control for that in the table below. For example, “injury fatalities” exclude occupational disease and motor vehicle fatalities. The UK stats span the fiscal year 2012/13 while Alberta’s numbers are for the 2013 calendar year. 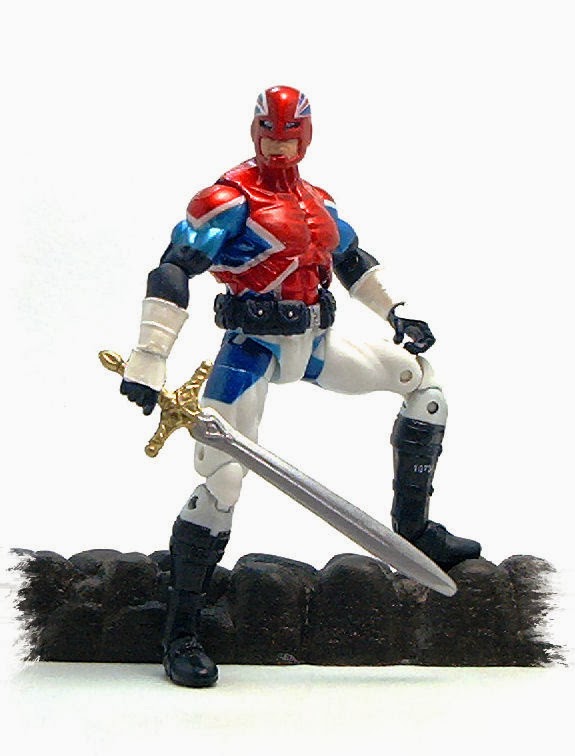 Controlling for population size, this means:

1.   Alberta has 5.9 times more fatalities due to workplace injury than the UK.
2. The UK completes 7.5 times more OHS prosecutions than Alberta.

Perhaps most disconcerting is that UK completes 5.0 prosecutions per workplace fatality while Alberta completes 0.38—that is to say, the UK rate of prosecutions per fatality is 13.15 times Alberta’s rate. The spectre of punishment may help explain why UK fatality numbers are lower than Alberta’s.

In related news, yet another farm worker was killed on the job after being sucked into a grain augur and “mangled to death”. How this happened will likely never be clear as the RCMP only investigate to determine if the death was criminal and OHS has no jurisdiction on farms (my guess is the guard was missing or removed).

According to the Herald:

New Labour Minister Thomas Lukaszuk told the Herald last week he is “warm” to extending the law to include agribusinesses, but the problem has been determining where to draw the line between family farms and agribusinesses.

The notion that farms are somehow difficult to regulate because they are places where people both live and work has become the Tories’ mantra for inaction.

Even a minute’s thought tells you this excuse is untrue. Every other province somehow manages to regulate farms. And Alberta regulates greenhouses, sod farms, nurseries and mushroom farms—some of which have to include on-site residences.

The real issue is a lack of political will to regulate farms or workplaces more broadly. Until that changes, Alberta’s fatality numbers are unlikely to go down.

By Thor's Hammer... reality check on workplace health and safety 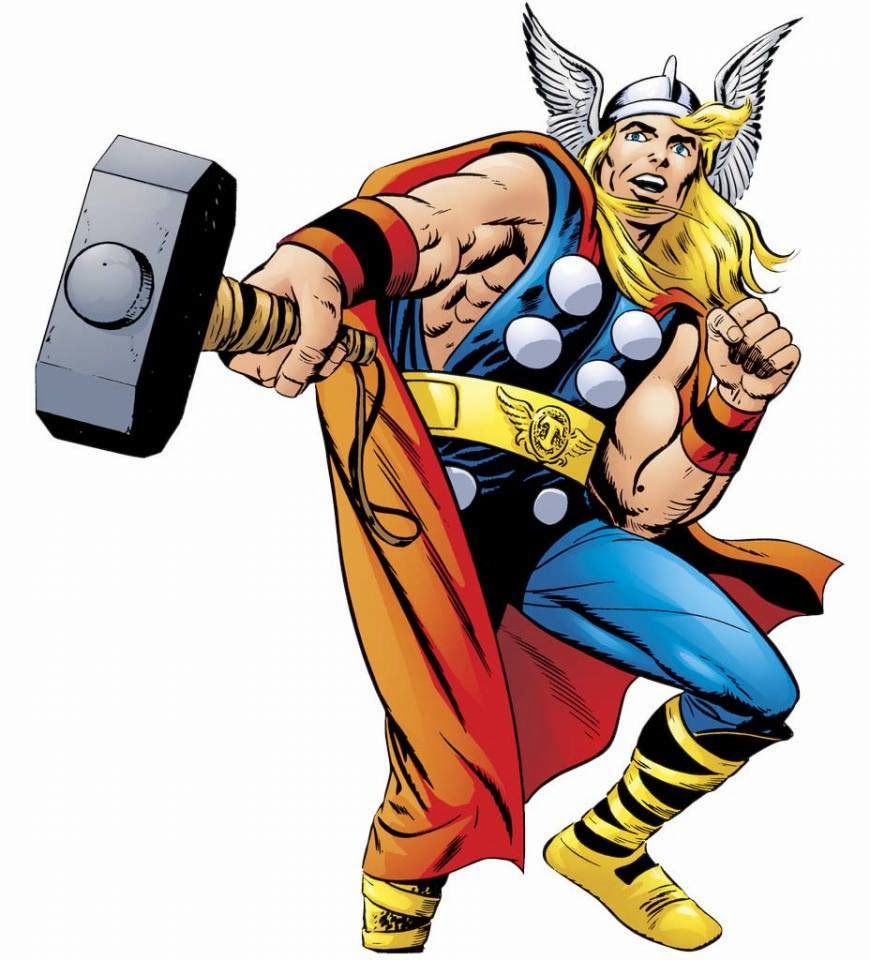 Last Friday, the government released 2013 workplace-fatality totals. The number of fatalities accepted by the WCB was up significantly in 2013.

To these totals you must also add 15 delayed fatalities (fatalities that occurred in 2013 but were caused by an event in a previous year). This brings the total number of workplace-related deaths to 188.
In a follow-on story, the Calgary Herald reports that the government has not issued any administrative penalties (which came into effect on October 1, 2013) or workplace tickets (which came into effect on January 1, 2014).

This sits uneasily with then-Minister of Human Services Dave Hancock’s promise when the legislation was enacted:

There will be no more slaps on the wrist in Alberta; a worker or employer who puts health and safety at risk, or is misleading or unfair in their business dealings, will be held accountable.

Confronted with this, now-Minister of Jobs, Skills, Training and Labour Thomas Lukaszuk told the Calgary Herald:


"Am I disappointed? I had a very strongly worded conversation with my department today.”

"I definitely have an expectation that any and all tools that are available to enforcement officers are used to ensure our workers are safe."

Lukaszuk pointed out he introduced administrative fines and ticketing, vowing at the time to drop the hammer on dangerous job sites.

"The hammer is out again," he warned.

It is pretty hard to take Lukaszuk’s bluster seriously. Have a look at the last 9 years of prosecutions under the OHS Act in Alberta.

Part of the issue, according to the government, is that only 8 of 151 OHS officers have received the training necessary to qualify as peace officers—status that is required to hand out tickets. Given the government’s virtually infinite resources, this bottleneck reflects a lack of will (or perhaps poor planning) rather than some sort of insurmountable barrier.

It is interesting to step back from the fatality totals and consider how the government has handled workplace regulation since 1993. With a few exceptions, Tory politicians have generally maintained (and occasionally even toughened) the health and safety and employment standards rules. But minister after minister has starved (and otherwise discouraged) enforcement to the point where the rules are meaningless—behaviour which is shameful.

Research on the effect of salary disclosure

Last Friday, Alberta disclosed the salaries (and value of benefits) of anyone appointed under the Public Service Act and making over $100,000.

One of the outcomes of this disclosure is that we now can determine the veracity of a December statement by Derek Fildebrandt, the Alberta director of the so-called Canadian Taxpayers Federation. Back then, he supported Bill 46—Tory legislation to freeze wages among civil servants represented by the Alberta Union of Provincial Employees (AUPE)—by noting that:

While there are many deserving and hard-working members of (AUPE), its leadership hasn't grasped the seriousness of the province's fiscal situation. Rather than work with the government to address the serious problems with the costs of public sector employee compensation, they walked away from the negotiating table.

As it turns out, only 88 of the 22,000 workers (0.4%) affected by Bill 46 are in the list. The average government worker makes around $58,000.The real high rollers are managers (who are outside of the union), especially extremely senior bureaucrats.

That kind of sloppy argument—lumping two clearly different classes of employees together to get a politically useful but completely misleading number—ought to make us wonder about the quality of other CTF “research”.

Anyhoooo… so what was the purpose of this so-called “sunshine” list? According to then-Minister of Service Alberta, Doug Griffiths:

Disclosure just makes sure we keep both sides of the coin exposed. We’re able to attract great people but we’re also able to make sure we control the salaries in a way that’s appropriate for meeting our fiscal responsibilities to taxpayers.

How exactly the list will control salaries is unclear. Will individuals be so embarrassed that they voluntarily decline increases or demand rollbacks? Will their bosses put the brakes on salaries? This graphic (courtesy of the Wild Rose) suggests not… 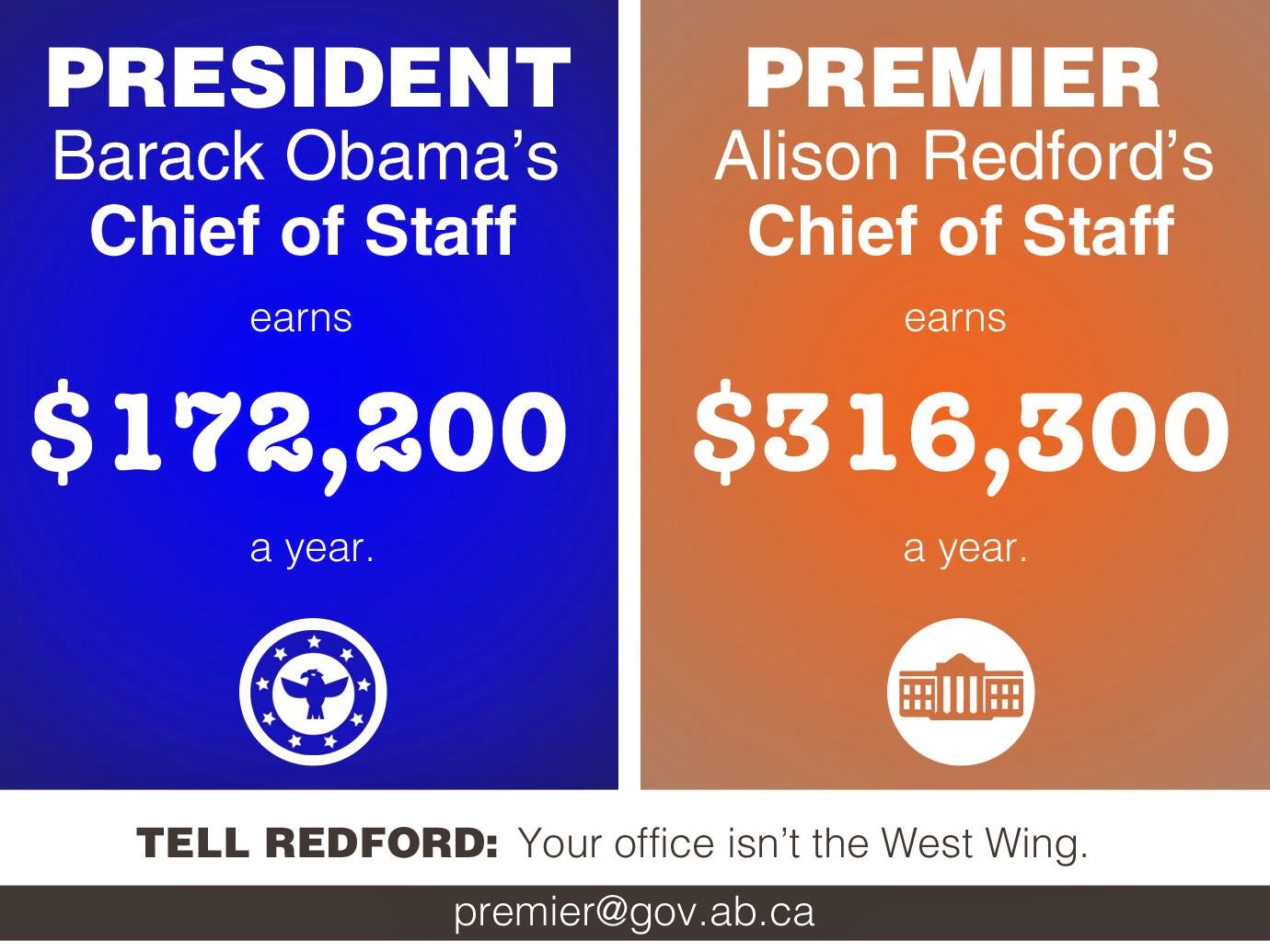 Ontario enacted a similar law in 1996. The only analysis of the effect of that salary disclosure law that I could find was a 2010 research note from Canadian Public Policy. It examines changes in the salaries of university presidents and academics between 1996 and 2006:


…(I)n the academic sector at least, disclosure has not been associated with restrained salaries. Instead, if any tentative conclusion can be reached, it appears that salary disclosure has most likely been inflationary. This is consistent with numerous theoretical propositions that contend that disclosure puts more upward than downward pressure on wages.

So, what research there is on public-sector disclosures suggests it triggers aggregate salary inflation. There are greater gains at the bottom (as those who earn less demand parity) but, overall, there are across the board wage increases.


…(F)irms paying highly restrain pay increases and save money, and firms paying below market limit their chances of incurring costs associated with such a low position by adjusting pay upward. On the left corner however, mandatory disclosure enables some other firms to race for the market’s top pay position. The empirical results show that this overbid for the top paying spot has a market-wide inflationary effect on the CEOs’ pay.

I’d like to say that it is strange how the Conservatives tend to be impervious to evidence when making policy decisions. But I can't. Ignoring evidence is standard operating procedure for Tories. For example, this afternoon I’m off to a focus group on Alberta's new workplace health and safety strategy that appears to (once again) emphasis education over enforcement—the exact opposite of what the evidence suggests is effective.