The Institute for Work and Health (IWH) has released some new research summaries about workers' compensation.

Emile Tompa's study of the impact of experience rating on workplace injury suggests Ontario's current system encourages claim management over injury prevention. Tompa's study will be published in a special issue of Policy and Practice in Health and Safety which is due out soon.

The IWH has also issued an Issues Briefing examining the effect of the recent recession on workers' compensation claims. This research found that claims tended to decline to a greater degree than hours worked during recessions. This suggests the common belief that claims rise (i.e., compensation is counter cyclical) during a recession (due to malingering) is incorrect.

The Journal of Workplace Learning has recently published "Not learning in the workplace: Austerity and shattering the illusio in public service work." This article departs from much of the literature on workplace learning by examining how public policy can trigger instances of "not learning" in the workplace.

The gist of the article is that austerity measures create significant stress and conflict in workplaces. This can be particularly evident when the priorities of managers and workers clash. Managerial priorities typically win out in such clashes and cause workers much angst.

One of the ripple-on effects of this conflict is to inhibit workplace learning. Ironically, workplace learning is inhibited at exactly the moment when workers are being pressurized to do more with less (or, in the lexicon of neoliberalism, being asked to "innovate").

Posted by Bob Barnetson at 7:08 AM No comments:

The Canadian Association for Research on Work and Health is hosting its bi-annual conference on June 1 and 2 in Vancouver. The conference program has just been posted and looks fantastic.

Of particular interest to me is panel on using WCB data to improve our knowledge of OHS as well as panels on vulnerable populations and precarious employment.

Following on my earlier discussion of the Progressive Conservative labour platform, I’ve had a couple of queries about the Wild Rose platform. I’ve spent some time looking through their website and can find relatively little on labour matters in their Green Book or elsewhere. If I have missed something, perhaps someone would be so kind as to point it out.

What I have found are these promises:


These relatively high-level items aside, there is no real labour policy laid out. I do note a commitment to “consulting extensively with industry” (p.83) and “review and reduce unnecessary regulatory burdens” that “harm.. competitiveness” (p.99).

This language is vague and expansive enough to house a significant attack on worker rights. For example, Wild Rose has already mooted a public-sector wage freeze. I'm rather unsettled by the WRA's lack of a position in labour and employment law. But, I suppose, I'm hardly their target audience!

Posted by Bob Barnetson at 12:23 PM No comments:

Book: Quiet: The Power of Introverts 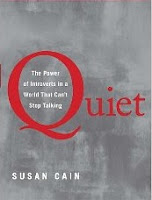 I recently read Quiet: The power of introverts in a world that can’t stop talking by Susan Cain.  This is a very readable introduction to the world of introversion with some interesting applications to employment and education.

Among the points the author canvasses is the utility (or lack thereof) of techniques such as brain-storming. I still flinch whenever I see a flip chart! As an aside, the New Yorker had an interesting article about brain storming and teamwork —you can also listen to a podcast about this article.

Cain then explores group and team work, and open plan offices. As an introvert, the worst job I ever had saw me in a cube-farm where my work was constantly interrupted by the lady in the cube next to me discussing day trading (while at "work"!) all day long on the phone. She also discusses the extrovert ideal in leadership roles and different information processing strengths of introvert and extroverts.

There is nothing particularly earth shattering in Cain’s book, but if offers a useful corrective to much of the popular discourse on leadership and organizations—discourse which tends to emphasize extrovert-friendly behaviours regardless of their actual utility.

The Alberta progressive conservative party is promising, if re-elected, to extend automatic compensation for post-traumatic stress disorder to emergency services personnel. Special treatment for emergency service personnel is not unusual. For example, certain cancers are automatically compensable for firefighters.

This is likely to be a popular election promise: emergency services workers are well regarded (they have tough jobs) and the cost of this promise is relatively low and borne by employers (although, most emergency-service employers are governments so this is ultimately a tax-funded expenditure).

While I’m sure I’ll take some heat for saying this, I find this proposal (the sole health and safety plank in the PC platform) to be pretty disappointing. It would be much more meaningful if the conservative party took action on either Premier Redford’s promise to extend basic safety rights to farm workers or on Thomas Lukaszuk’s promise to finally ticket unsafe employers. Instead, the PCs make a small-potatoes promise to a group of workers who are already relatively privileged.

This isn’t, however, surprising. The PCs have always been the party of business and the rest of the PC platform on labour (pp. 28-30) reflects this. It includes sops to the tarsand and construction industries (more migrant workers and weaker labour laws to "secur(e) the promise of Alberta's future"!) and some further meaningless platitudes about improving aboriginal employment.

Yesterday I participated in a research panel at Athabasca University where faculty presented research in progress. I don’t recall the name of my panel (in my mind it was “Capitalism: Oh My!” but I presume the real name was more scholarly). I presented on some research I’ve been doing on farm work that is currently in peer review. Below is the 15-minute presentation I gave.
Justifying Alberta’s exclusion of farms workers from health and safety legislation
Athabasca University Research Forum, April 10, 2012
Bob Barnetson, Associate Professor,
Labour Relations, Athabasca University
Alberta is the sole province that excludes agricultural workers from the ambit of its occupational health and safety act. This exclusion denies workers in one of Canada’s most hazardous industries basic safety right—things even university professors take for granted. For example, Alberta farm workers have no right to know about safety hazards, no right to participate in their remediation and no right to refuse unsafe work. It also means the government cannot intervene on farms to ensure workplaces are safe and can’t investigate injuries on farms except to determine if they are criminal.
Alberta faces significant criticism for this exclusion, in part because it seems to prioritize the interests of farmers over those of workers. This study is a qualitative content analysis that examines how government members of the legislative assembly (MLAs) justified this exclusion in the legislative debates of the past decade. This analysis gives us a sense of how politicians have sought to resist pressure to regulate farm safety. It also gives us some insight (albeit imperfect) into the question of why politicians would resist pressure to regulate farm safety.
What I’ve found is that three narratives justifying this regulatory exclusion emerge from the Hansard statements:


What I propose to do with the rest of our time today is outline and critique each of these narratives.
The first narrative is: Education is better than regulation. Herein MLAs assert that the government’s proper role in farm safety is to provide information about safe practices—not enforce the adoption of such practices. To justify this position, MLAs have (at times) suggested that information prevents injury. At other times, MLAs have asserted that education is more effective than regulation at preventing injury.
These assertions fly in the face of the small number of studies that have been done on the effect of educational programs on farm safety.  They also run contrary to the bulk of the studies about the effect of educational programs on workplace safety.  Basically, the literature (and common sense) suggest that while knowledge is a prerequisite for safe workplaces, there is little evidence that knowledge alone has much effect on injury outcomes. Only active regulation has been shown to reduce workplace injuries.
The MLAs’ position (articulated by former premier Ed Stelmach) that “You can’t legislate common sense” is clearly wrong. Mandatory bike helmets, child car seats, and seat-belt usage laws all legislate “common sense” and have resulted in significant injury reductions. Overall, this narrative is invalid.
The second narrative is: Farms cannot be regulated. In short, MLAs have asserted that there is something unique about farms that precludes regulation. Alas, what is unique about farms is elusive.
MLAs sometimes indicate that farms are mixed-use properties (i.e., homes and businesses) thus cannot be regulated. Unfortunately for this argument, not all farms have this characteristic—some are just businesses. And the government does regulate greenhouses, mushroom farms and nurseries—some of which are mixed-use agricultural operations.  Essentially, this is an obviously defective argument—the government can and does regulate mixed-use work sites.
MLAs then switch gears to suggest that “family farms” (which are somehow distinct from corporate farms) ought not be regulated.  But MLAs cannot specify any characteristics of a family farm that would allow us to distinguish between a “family farm” and a “corporate farm”. Many small farms are incorporated. Many incorporated farms are family owned and quite large. Many large farms are sole proprietorships. And so forth. This argument appears to simply be a rhetorical device to sidetrack discussion.
Finally, MLAs will also assert that the nature of the labour force (often comprising friends and family members) precludes regulation. This ignores that friends and family members are employed in many businesses (e.g., restaurants, construction, retail), all of which the government successfully regulates. Again, we have a largely invalid narrative.
The third narrative is: Farmers don’t want and can’t afford regulation. Let’s start with “farmers can’t afford regulations”.  There is no evidence suggesting this is the case—it is just a bald statement. Further, we expect all other businesses to bear the cost associated with workplace safe. MLAs never explain why farmers should be allowed to externalize those costs (in the form of injury) on workers?
What this assertion does do is it displaces concerns about worker safety with concerns about farm bankruptcy. In this way, the desire of farmers (we don’t want regulation) is turned from a bald statement of self-interest into an unverifiable rationale (farmers don’t want regulation because they can’t afford it) that makes farm profitability the paramount concern. Again, hardly a compelling case for maintaining the exclusion of farm workers.
If the arguments MLAs muster to defend this exclusion are so obviously defective, why then do MLAs continue to resist regulation? Now, it may be that MLAs aren’t that bright and simply don’t see that the narratives they just to justify the exclusion are invalid—but I don’t think that is universally the case. Rather, I think the answers can be found in the votes.
Rural riding have historically elected conservative MLAs. And Conservative MLAs have ensured that rural riding have maintained disproportionately large representation in the legislature. In effect, there is a symbiotic relationship between rural ridings and the conservative government, wherein political support from ridings (in the form of votes) begets political support from politicians (in the form of program spending and favourable legislation).
Preventing the regulation of workplace safety in agriculture is, then, part of Alberta’s culture of cronism. The narratives advanced by MLAs simply provide political cover, both for employers who continue to expose workers to unsafe conditions and for the politicians that allow this to continue.
-- Bob Barnetson
Posted by Bob Barnetson at 7:09 AM 1 comment: