An "investigation" by the CBC (i.e., they drove around a bit) of construction sites in Alberta has uncovered multiple incidences of safety violations, particularly around fall protection. 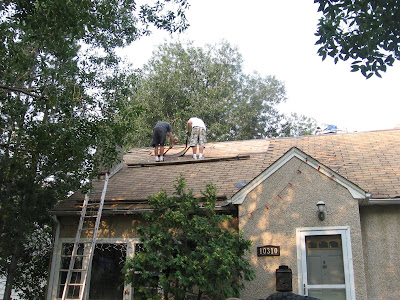 This is hardly groundbreaking news. You can see violations on almost every construction site you wander past. For example, I snapped the picture above from my front porch. It shows no fall protection despite the workers being at least 5 meters off the ground. They have nailed a board at their feet, which is actually a tripping hazard. And the ground below (out of the shot) is covered with debris that would exacerbate any injury sustained from a fall.

This picture is the norm. I could take 10 more like it everytime I go for a bike ride. I could call this in. But it would take up to 18 days for an inspector to come out (this crew was in and out in 14 hours) and an average of 86 days to get compliance from the company. Why would anyone bother with that process?

The reason the CBC investigation is important is because is again raises the issue of why the government does not conduct a meaningful number of random safety inspections given such clear evidence of widespread noncompliance with the law? The government never engages with this question.