Episode 2 of Season 1 sees Jack in trouble for failing to supervise his students. Jack is forced to choose between a short suspension and fighting the discipline. If he fights the discipline, he remains suspended with pay and has to hang out in “teacher jail” playing cards and such. Niecy Nash (who is hilarious) plays the union rep “Kim”.

There are two interesting aspects of this storyline. The first is that the union rep and the principal (played by Patton Oswald) have a long history and the union rep uses the grievance to get back at the principal  We rarely get into the complex relationships that develop between union and management reps over time and how these relationships colour the handling of grievances and other business. The idea of a grudge shaping decision-making is quite (and perhaps unintentionally) accurate.

The second is that teacher jail is framed as a bit of a ridiculous place where bad people go to kill time on full pay. This plays a bit into the “malingering worker” trope. What is interesting about teacher jail is how at odds it is with how discipline workers in both in Canada and especially in the US. Basically, workplace discipline sees workers as guilty until proven innocent. If they are innocent, they may get some compensation for their lost wages or jobs but few non-unionized workers can afford to fight discipline.

Arrangements where a worker is suspended with pay pending the employer proving discipline (i.e., innocent until proven guilty) are few and far between, even in unionized environments. Yet this seems like the fairest approach, since the burden of proof falls on the employer and the employer imposing sanctions without actually proving the worker did anything works a great unfairness on workers. It is telling that Jack only has access to this kind of approach because he has a union that’s negotiated a solid contract.

Alberta Labour released its annual report for 2020/21. As usual, there are a number of interesting tidbits to be found in amongst the spin doctoring. For example, the report (p.18) identifies that the Minimum Wage panel (struck in 2019) to examine the impact of minimum wage changes (and likely to support reducing the minimum wage for servers) reported (I’m told in the spring of 2020) and the government is sitting in the report.

Given the difficulty that many minimum-wage employers are having recruiting staff, it will be interesting to see if the government goes ahead with re-introducing this two-tier wage structure and, if it does, whether employees will be able to take advantage of it and grind server wages.

There was some interesting analysis this year that higher youth wages do not appear associated with job losses among youth (which was the pretext for introduce a lower youth wage in 2019). There is also some suggestion that lower youth wages have not resulted in improvements in youth unemployment. In June, youth (age 15-24) unemployment was 18.1% in Alberta, basically double overall unemployment (9.3%).

The emphasis on helping unemployed Albertans return to work (either via additional training or labour market services) is notable and reflects the 6.6% drop in employment in 2020. The government also reduced by about a third the number of spots available to migrant workers who wish to become permanent citizens to, in part, “enable more job opportunities for unemployed Albertans” (p. 36). Interestingly, the department continued to make efforts to increase labour mobility within Canada by lowering the already low barriers to having certifications from other provinces recognized (pp.37,39). 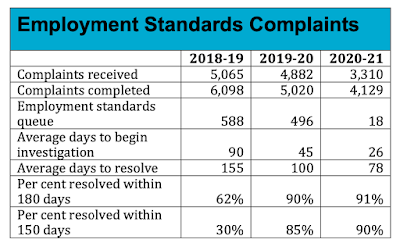 There is no data provided on what percentage of complaints were found to be valid or how much unpaid wages were recovered (or not recovered). The number of human trafficking investigations jumped from 59 to 95 (no data on outcomes) and single administrative penalty was issues to an employer who derived economic benefits from non-compliance. The report pumps this up as the biggest fine ever issues. What is ignored is that pretty much all valid ES complaints involve the employer enjoying an economic benefit. So a single employer being penalized is not really a huge success. 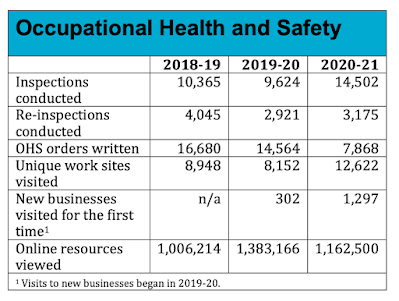 The number of OHS inspections was way up last year, likely reflecting the demands of COVID. The number of orders written was, however, way down. The explanation offered is a bit hard to parse but I think it says that basically OHS only lowered the boom when there was repeated noncompliance. What this tells employers is that they basically get a free pass on their first offence (unless someone gets injured or killed), which does not really incentivize voluntary, pro-active compliance by employers.

There were also 18 administrative penalties issued to employers, totalling $62,500. This number is up over last year (14) but I can’t find the data to track the dollar value. Seventeen charges were laid this year against employers (about the same as last year). Fines as a result of convictions dropped from $5.2m to $1.9m because, you guessed it, the number of charges in previous years dropped.

While injury rates an not very good measures of injury due to massive under-reporting, they do offer year-over-year a measure. There was a significant jump (8%) in lost-time claims and is at the highest level since 2011. COVID explains part of the jump this year, but it is notable that there has been a long-term trend (since 2016) upwards. This suggests that Alberta injury prevention efforts are not working. Accepted fatalities sat at 130, which is about the same as last two years.

The number of certification applications in 2020/21 was way down (51%). This is likely the result of the reintroduction of mandatory votes (which makes certification drives riskier for unions) and COVID. On the upside, the Labor Board finally began allowing electronic filing (dumping their outdated paper/fax-only system).

Posted by Bob Barnetson at 9:01 AM No comments: