There were two recent video clips on farm safety in Alberta. On May 16, Alberta Primetime did a short piece on the continued exclusion of farm workers from employment laws. Again discussion swirled around family farms versus corporate farms and the parameters of regulation. There was the usual shuck and jive about all farms are family farms even though some are large forms or corporate farms. Blah, blah, blah.

An interesting narrative that may be developing here is that there are a small number of bad actors who refuse to voluntarily comply with OHS rules. I'm not sure if that is true, but it does create an opportunity for activists to drive a wedge between producers--perhaps breaking down the historically broad opposition to regulation. There was also an interesting discussion of employer tactics re: bullying migrants workers.

Subsequently, there was a longer discussion about the constitutionality of the broad statutory exclusion of farm workers on Calgary Now.

The discussion included a law prof, a union rep and an injured farm worker. The hosting is a bit uneven but the discussion of the constitutional problems with the exclusions and the demands of farm workers (e.g., drinking water, washroom facilities) was quite fascinating.

Posted by Bob Barnetson at 12:56 PM No comments:

Another bad idea from the Canadian Taxpayers Federation

The Edmonton Journal has published a new op-ed piece by the Canadian Taxpayers Federation about public-sector labour relations. At present, public-sector workers are precluded from striking. When collective bargaining reaches impasse, a neutral third party determines the settlement, typically by looking at comparable settlements.

In the CTF’s op-ed, Derek Fildebrandt argues that the government should amend the legislation governing public-sector labour relations to compel arbitrators to:


…to reflect the fiscal realities of the province.

Arbiters in the private sector generally do not award raises when a company is hemorrhaging money or is unprofitable. Similarly, arbiters should be required to reduce pay or at least hold the line when the current revenue and spending framework is leading to a growing debt.

The problem with Fildebrandt’s prescription is that it obfuscates a fundamental difference between public- and private-sector employers.

Arbitrators are loathed to apply “ability to pay” in public-sector arbitrations because politicians have an electoral incentive to minimize taxes and maximize programming. They have their cake and eat it too only if they underpay their workers.

That is to say, accepting ability to pay arguments in the public sector would allow politicians to force public-sector workers to subsidize public services via substandard wages.

(Yes, yes, no one wants to pay more taxes. But, if taxpayers want adequate public-sector services, it stands to reason they have to pay for them, no?)

Externalizing costs via mandating substandard public-sector wages likely sounds good if your interest is minimizing corporate taxes. But, to fair-minded people, mandating public-sector arbitrators consider a government’s ability to pay (which is, in truth, unlimited) is simply another way to screw public-sector workers.

Attacking public-sector workers has (happily) proven to be political suicide for the Tories. No party with ambitions to actually form government is likely to adopt this strategem. 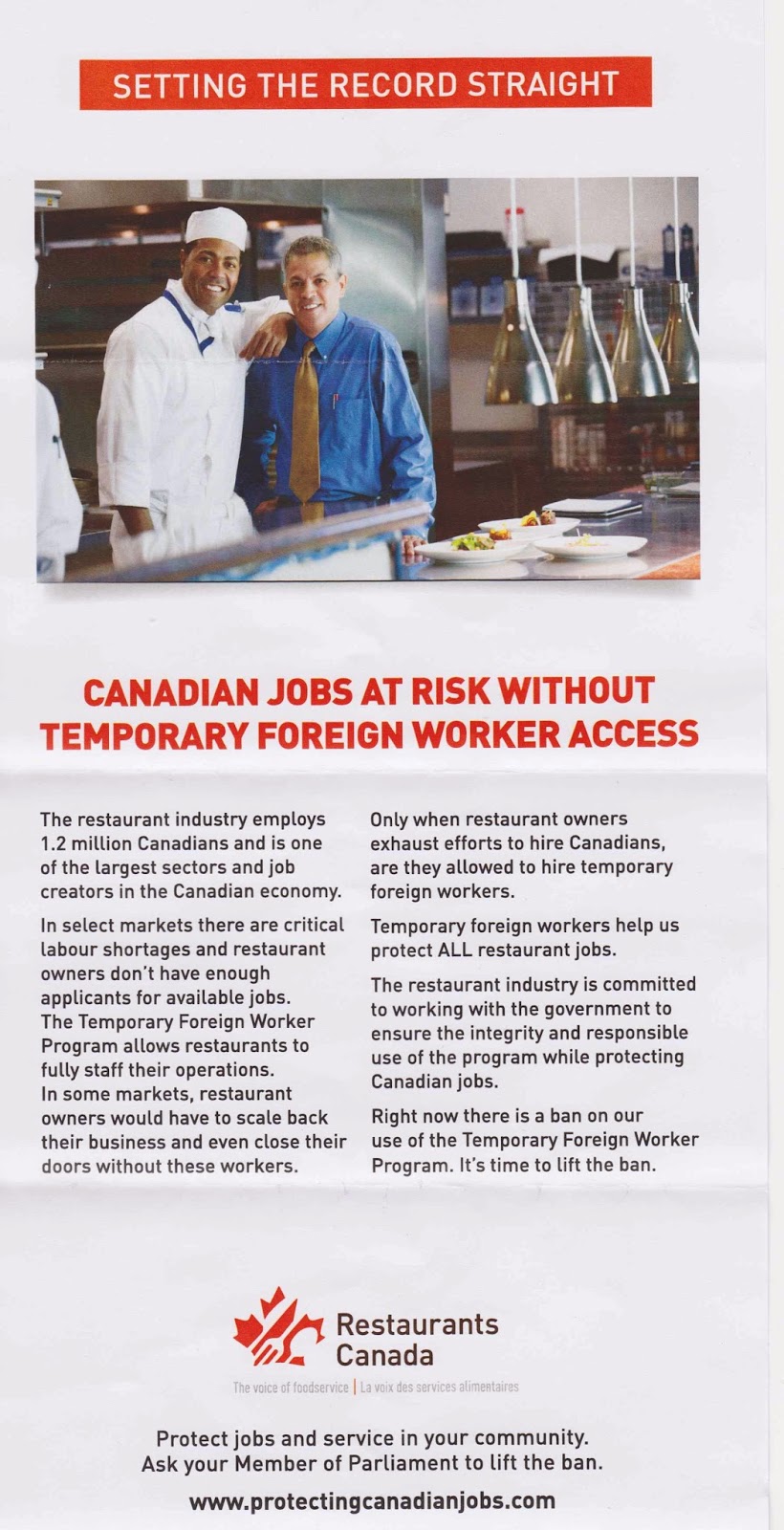 Restaurants Canada, an association representing restaurateurs, has recently begun distributing this handbill in places like Tim Horton’s. The gist is that the moratorium on temporary foreign worker (TFW) permits in the food services sector is problematic for restaurants and restaurateurs want the ban lifted.

The first is that TFWs can only be hired when restaurateurs have exhausted efforts to recruit Canadians. The media coverage that lead to the moratorium on TFWs in the food services sectors demonstrates this claim is false. The current system has essentially non-existent oversight (which is the fault of the federal government) and TFWs are hired in the restaurant industry when there are Canadians willing an able to do the work (which is the fault of profit-maximizing employers).

The second is that TFWs are necessary to staff restaurants; in their absence, some restaurants would have to reduce their hours or close their doors. By avoiding this outcome, TFWs help protect Canadian jobs.

This statement is trickier to untangle.

The assertion that “no TFWs means few hours and closures” is not necessarily true. Employers can almost always induce workers who are sitting on the sidelines (in a specific jurisdiction or elsewhere) to join the labour force if the wages and working conditions are right. A look at unemployment among marginalized groups (aboriginal, disabled) and other provinces suggests that lots of potential workers available. But, higher wages and better working conditions raise labour costs which reduces restaurateurs' profits.

It **may** be that some restaurants will end up going out of business without access to TFWs. But if a business can’t afford to pay its suppliers (including its workers) a competitive price, isn’t this a sign that the business is not viable? And won’t any displaced Canadian workers then find employment at another restaurant (which will pick up the customers from the closed business)?

This self-correct dynamic (which is called "the free market at work") highlights the devious nature of the assertion that “TFWs protect Canadian jobs”. On the surface, TFWs do protect specific Canadian jobs by allowing otherwise unprofitable businesses to suppress wages via access to additional workers.

But people change jobs all the time. The real question is whether a moratorium on TFWs will result in long-term job losses among Canadians.

Eliminating employer access to TFWs may well cause a period of disruption, with some Canadian workers changing jobs. But, if restaurant really do hire TFWs only when there are no Canadians, then all of these displaced Canadians should be able to find work. And, when this period of disruption settles out, both wages and working for Canadians are likely to be better (because scarce employees have more bargaining power).

What this campaign is really about is minimizing labour costs for restaurateurs by giving employers access to a larger labour pool.

To be fair, continued access to TFWs in the food service industry mean (1) restaurants are open longer hours and (2) the price of a meal will be lower.

But, the framing of this campaign doesn’t lead to a meaningful debate about the relative merits of migrant workers, low wages, cheap food and 24-hour cheeseburgers.

Instead it seeks to raise anxiety about the (false) spectre of fewer (lousy) jobs and pressurize the government to allow employers access to low-cost workers.

Protect AU from the call centre?

The Canadian Union of Public Employees has launched a new website for those who wish to express their dismay with Athabasca University's efforts to displace the tutor model of instruction with a call centre. You can visit Protect Learning at AU by click the link and filling out a digital postcard.