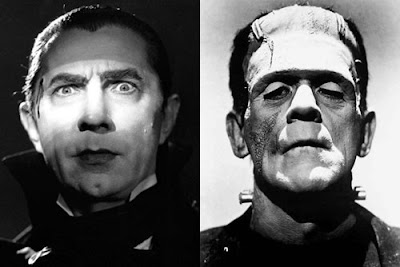 I ran across this interesting article last year about the origins of the Screen Actors Guild (SAG) in the United States (which has merged with the American Federation of Television and Radio Artists in 2012 to form SAG-AFTRA). SAG started in 1933 to prevent the exploitation of actors by movie studios.

Among the founding members was Boris Karloff (most famous for portraying Frankenstein). Karloff was concerned about long hours (including one 25-hour stretch) and dangerous working conditions on set and one of the first SAG meetings took place in Karloff’s garage. He served as a Board member and officer of SAG from 1933 to 1951.

Bela Lugosi (most famous for playing Dracula) was also an early member. Lugosi emigrated from Hungary in the 1920s after engaging in labor activism among actors there. Both Lugosi and Karloff were SAG recruiters, soliciting memberships from actors on the sets of their movies. 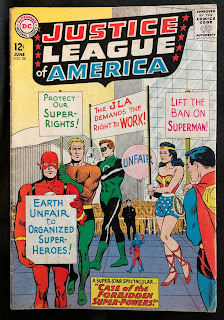 I ran across a 1964 issue of the Justice League of America (JLA) comic book that appeared to be about unionizing superheroes. The cover shows various heroes picketing, demanding their rights.

The JLA is so law abiding that they decide to comply while peacefully picketing. Picketing proves totally ineffective so they turn to direct action. In this case, crime fighting without using their super powers.

Which is a bit of a major plot hole because the impetus for this was that the non-super-powered heroes couldn’t effectively fight these super villains. After many tedious pages, The School Master’s plot of revealed and the injunction is lifted.

Overall, this was pretty disappointing. Some interesting points include the government being manipulated into helping out greedy supervillains, picketing being framed as ineffective, and the heroes turning to direct action.