The "shortage" of skilled trades people

There is an interesting article in this morning's Globe and Mail examining the assertion that there is a need to training more tradespeople and fewer artsie types. The crux of the article is that trades training is associated with:


Nothing wrong with the jobs themselves, just that the career prospects are often overblown by industries seeking to expand the labour pool (which, coincidentally, lowers corporations wage costs...hmmm).

Although there are regional differences (there are shortages of all kinds of workers in Alberta, including tradespeople), the question this raises is whether adding additional training capacity in the trades (and shrinking it in other fields) makes sense? More broadly, does it make sense for free-market-lovin' governments to intervene significantly in program profiles of post-secondary institutions?

Williams-Whitt’s analysis suggests that the Klein-era K-12 funding changes (when school boards lost the power to tax) triggered a shift towards province-wide negotiations (both officially and de facto) over the subsequent 15 years. In effect, school boards got squeezed between the Alberta Teachers’ Association (ATA) and the province.  Her analysis leaves off in 2010, just as the ATA, the Alberta School Board’s Association (ASBA) and the government started tripartite negotiations for an agreement to replace the one that expired in August of 2012.

Fast forward through several years of negotiations, threats and tantrums and last night the ATA and province announced they’d signed a memorandum for a four-year deal. It looks like the ATA met with the Premier last Thursday to hash out a deal (which makes Education Minister Jeff Johnson's threat of legislating a contract on March 12 all the odder--was Johnson blowing smoke? Or was he cut out of the negotiation?). It appears the ASBA was not a part of this process, although the framework agreement requires them to sell it to their members(!).

“I can tell you that based on my first look at this latest proposal developed by the ATA and government — without the employer at the table — this agreement will have serious negative impacts on the education we provide in Alberta classrooms and schools,” ASBA Jacque Hansen wrote to her members.

Interestingly, all 62 school boards and ATA locals must ratify this by May 13; if any one ATA local or school board fails to ratify, then the deal falls through and local bargaining resumes.

The deal itself includes three years of zeros, a 2.0% raise in 2015 and a one-time 1.0% payment in 2015 (plus maybe some equalization money for low-end boards—it is hard to parse what the agreement means). There is also a promise by the province to look at teacher workloads, perhaps a nod to a study released by the ATA on work-life balance and attrition in Alberta schools. The government also agrees to retain existing language on instructional limits and there will be an effort to reduce instructional time to 907 hours per year. Local bargaining on some issues will continue.

There is also a letter signed by the Premier and the Minister promising to not do a variety of things. It is a bit hard to determine what is being promised (it is highly legalistic in its phrasing) but it looks like the government is promising not to attack statutory provisions affecting teacher rights and the ATA’s position as bargaining agent. It provides the ATA with a promise of input into any significant changes in the collective bargaining process (although what changes are contemplated are unclear).

The manner in which this deal was negotiated (basically the province and the ATA have foisted a deal on the ASBA) is consistent with the trends identified by Williams-Whitt. Interestingly, whether this memorandum passes ratification and its operational implications (e.g., class size, teacher layoffs) lie largely within the control of ASBA members. School boards have already been directed to reduce administrative expenses by 10% (which some view as micro-management) so there is still room for this deal to go off the rails.

There is also the possibility that an ATA local won't play ball. One presumes the ATA will work hard to sell the deal, playing up the bits around containing instructional hours. But, from a pocket-book perspective, three years without a cost-of-living adjustment followed by a small adjustment (a third of which is one-time money) and no layoff protection is simply a bad deal. I know I wouldn't vote for something like that if my employer offered it.

Yesterday, the province released the report of the Farm Safety Advisory Council’s report, more than a year after it was submitted to the government.

The government has accepted all of the recommendations in the report. This is not surprising since the recommendations are basically status quo statements developed by a committee dominated by agricultural producers. The strategies include focusing on (demonstrably ineffective) education and safety certifications (a style of programming the Auditor General has criticized in other industries). Basically more of the same that we already know doesn’t work.

This week happens to be agriculture safety week in Alberta and there were a couple of statements in the house around farm safety. David Swann’s statement yesterday is worth reading as it highlights one of the ironies of agricultural safety in Alberta: farm animals have more safety rights than farm workers:

Dr. Swann: Thank you, Mr. Speaker. This is Agricultural Safety  Week, and we’ll no doubt see some celebrations by the  government, but this Premier’s promise to address the unjust and unsafe working conditions for paid farm workers, including  children, remains another promise unfulfilled. Ironically, Alberta’s  farm animals will be celebrating their 30th anniversary of  legislated health and safety standards, Mr. Speaker: animals with  legislated health and safety standards, the strictest farm animal  care legislation in North America. For example, it’s illegal to  carry farm animals in an open pickup truck in Alberta, but farm  workers? Not a problem.Politically motivated exemptions for industrial farming  operations for occupational health and safety, workers’ compensation, and child labour legislation are appalling to conscientious  Albertans, as they should be. This discrimination leaves workers  and their families at peril and transfers, according to the most  recent Alberta statistics, $374 million for farm injuries over the  past 20 years onto the health care budget instead of costs being  borne by the agriculture industry through WCB, as is mandatory  for all other industrial operations.Now there is the much-touted social policy framework from a  minister who formerly, as child and family services minister and  Health minister, took no action on unregulated child farm workers  and safety standards for agricultural operations. His glossy  brochure calls for all Albertans to be “Safe, Healthy, Secure and  Resilient”; that is, unless you’re a paid farm worker. Small  wonder that this government and this framework are viewed by  most Albertans as all about political spin. Agriculture workers,  including children, deserve the same rights as every other worker. Agricultural Safety Week: only the farm animals have anything  to celebrate.

The issue seems to be that (1) all 62 ATA locals are in bargaining at the same time, creating the potential for a province-wide strike, and (2) the ATA can (although almost never does) veto locally negotiated deals.

So let’s unpack this a bit.

It is true that all 62 collective ATA collective agreements are up for negotiation, creating the possibility that there could be 62 strikes/lockouts at some point (likely next fall, if negotiations fail). But how did all of these expiry dates come to line up?

Well, several years ago (in an effort to prevent work stoppages), the government signed a five-year deal affecting all locals: basically it bought labour peace. This time around, the government wasn’t interested in labour peace (despite an offer by the ATA to take increases of zero, zero, two and four percent).

So it is Johnson’s government that has created the potential for (and likelihood of) a province-wide work stoppage. Mostly because the province is too broke to buy peace again because the Tories won’t create an adequate tax structure to pay for basic things like edu-ma-cating the young’uns.

It is also true that that ATA can veto local agreements. But it has only done so twice in decades, both times when the negotiated agreement violated the law! A third case saw the local agreement ratified. Wow, how irresponsible the ATA has been!

While the ATA could potentially step in, veto all 62 agreements and trigger province-wide strikes/lockouts, this is highly unlikely. Unions don’t want strikes. And strikes forced upon members by the union are likely to be unsuccessful.

Interestingly, Johnson’s own behaviour has not been so restrained.

Last week, Jonson called off province-wide negotiations a second time, after the ATA had rejected his latest ultimatum (“I’m breaking up with you, too!”). He now requires all school boards provide signed agreements to him 10 days ahead of ratification. The only reason for this would be for him to informally veto the deal, likely by threatening to replace the school board if they ratified something he found distasteful.

So, just in case you missed the irony, Johnson complains bargaining is broken because the ATA can veto local deals they don’t like (even thought they don’t) but then gives himself the same power. And then, unable to resist the temptation of such power, Johnson has told everyone who will listen (including the school boards) that all “negotiated” agreements must meet contain increases of zero, zero, zero and two per cent.

In a rather Orwellian twist, the Minister of Education uses the word “negotiate” to mean “impose”. And then he blames teachers for a bargaining situation his government created. And he suggests the ATA (which has always used its power to veto deals responsibly) is some how putting children’s education at risk when it is, in fact, his own (mis-)adventures in province-wide bargaining and subsequent tantrums and micromanagement of school boards that is causing the problem. 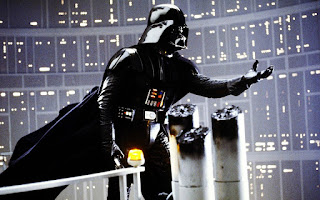 Basically bargaining has turned to bullying. Anyone remember the scene in The Empire Strikes Back where Darth Vader turns to Lando and says “I am altering the deal. Pray I don't alter it any further"? Kind of like that, but without the groovy special effects and incest subplot (although I have my fingers crossed on the latter).

In the end, intergalactic bullying didn’t work out for the Empire. Perhaps the Darth Johnson wants to reflect upon that.

An emerging area of scholarship in occupational health and safety (OHS) is the impact of climate change on workplace safety. I ran across two articles that touched upon this recently.

“Climate change and occupational safety and health: Establishing a preliminary framework” summarizes the research from 1988 to 2008 to identify seven categories of climate-related OHS hazards. While no new or climate-unique hazards were identified, the article nicely explains how climate change may intensify or expand existing hazards. Overall, a solid grounding in the topic.

A useful website this topic is Working in a warmer world: What do we need to know?