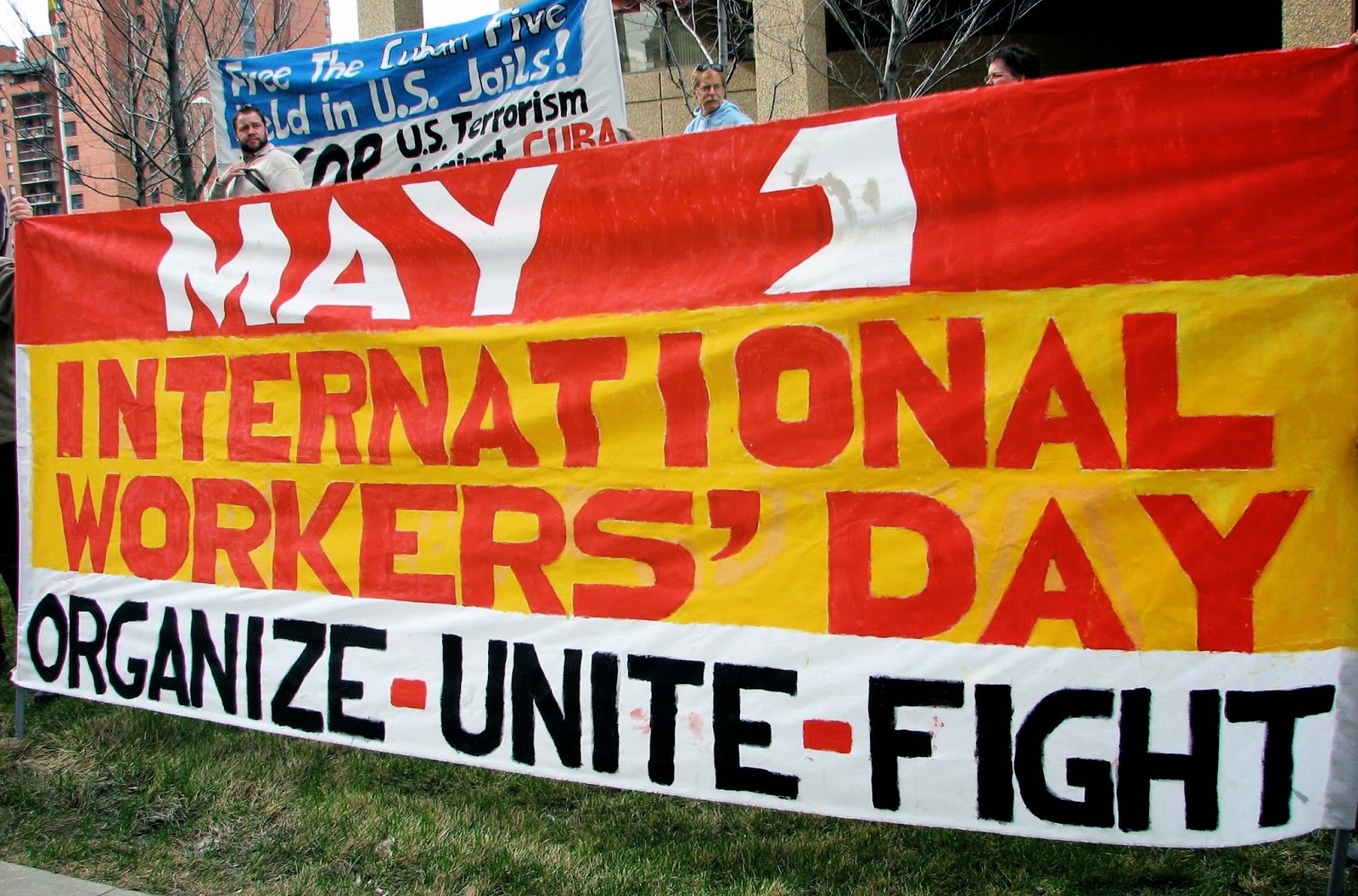 In Edmonton, May Day celebrations (May 1) begin with a rally at the Legislature (5:30 om, May 1) followed by a march down Jasper Avenue to Grant Notley Park with dinner to follow.

In Calgary, May Day celebrations (May 1) begin at Memorial Park (Corner of 4th Street and 12th Ave SW) at 5 pm with a picket followed by a potluck in the Central Memorial Park Library (12th Ave and 2nd St).

The 2014 Alberta Labour History Institute conference (June 18-20, University of Alberta) offers an interesting mix of popular and academic sessions for those interested in labour history. This year’s theme focuses on labour and social movements.

Canada allows foreign nationals to enter the country and work when there are no qualified Canadians to fill these jobs. Presently, there are (roughly) 340,000 temporary foreign workers (TFWs) in Canada and somewhere around 85,000 in Alberta. The program has been roundly criticized because of abuses of TFWs by employers.


Mr. Cardinal: …Mr. Speaker, employers first of all have to exhaust all avenues in relation to getting local employees in place and if they can’t do that, then they have to apply to the federal government’s temporary foreign workers’ program. It’s a challenging and complicated process and can be costly to the employer, so I’m sure and I have confidence in the employers in Alberta that every opportunity will be given first to Albertans and Canadians, aboriginal people, and people with disabilities. Alberta Hansard, 8 March 2005, pp. 85-86

In the past few months, a series of stories have identified restaurants such as McDonald’s, Tim Horton’s and a pizza joint in Saskatchewan as violating the rules and/or replacing Canadians with TFWs. Following on these stories was a C.D. Howe report on the effect of TFWs on unemployment rates (they push unemployment up).

Federal Employment Minister Jason Kenney, caught out by evidence that his government has failed to protect Canadian jobs (oops, the Tory base won't like furreners gittin' ar jobs!) and likely feeling electoral pressure from the Liberals, moved Thursday night to suspend access by the fast-food industry to TFWs. McDonald’s CEO reacted to the suspension by calling the controversy “bullshit”.

Never one to not issue a press release, Alberta’s Minister of Jobs, Skills, Training and Labour Thomas Lukaszuk opined:


It’s the reality of Alberta’s labour market: when jobs remain unfilled, workers are recruited from other sectors, customer service declines, or Canadians already on staff lose shifts or jobs when restaurants close or reduce their hours. Albertans want restaurant services, and companies need temporary foreign workers to provide them.

As usual, Lukaszuk’s grasp of labour matters is weak.

First, he fails to distinguish between an absolute labour shortage—where no more workers exist—and a relative labour shortage—where no more worker are prepared to make themselves available to work for prevailing wages and working conditions. Given that employers are often hiring TFWs to perform unskilled work—which any Canadian can do—and given that there is high levels of unemployment throughout Canada, this suggests that there is a relative labour shortage. In short, employers could attract Canadian applicants if they wanted to pay a decent wage and create a decent job. That employers choose to create crappy McJobs that no one applies for is a choice.

Second, he suggests that absent TFWs, restaurants will close and people will be laid off. This is an example of how a free market works: if you can’t afford to pay the going rate for labour, then you need to raise your prices or go out of business. What Lukaszuk (perhaps unknowingly) is advocating is having the feds give otherwise non-viable businesses what amount to a subsidy by allowing them to hire foreign workers for lower wages than employers would have to pay if employers were forced to attract Canadians. The effect of this subsidy is to depress wages and keep Canadians out of these jobs.

If there is an absolute labour shortage (and this is unlikely), then some businesses will close or reduce their operations, freeing up workers to staff more successful businesses. (Look, Thomas! The invisible hand of the market at work!) I doubt not being to get a cheeseburger at 3:30 am on every corner will really bring Alberta’s economy to its knees--surely Albertans can withstand such deprivation, no?

Lukaszuk then goes on to say:


Alberta feels it is unfair to freeze an entire sector because there are problems with a few players.

Is it just a few players? No one knows because the feds don’t have any meaningful way of validating employer applications or compliance. Basically, the feds avoid creating evidence that their policies don’t work. (Alberta does the same thing regarding compliance with its employment laws by relying on complaints to trigger enforcement.)

We do know that TFWs face widespread violations of their employment rights by their employers. For example, in 2010, the province announced that 74% of employers who employed TFWs and who were inspected were found to be violating the Employment Standards Code (mostly stealing wages from TFWs).

To assume (as Lukaszuk does) that most employers are good actors is to be willfully blind to employer’s past record of widespread non-compliance with the rules around TFWs and the incentives employers face to violate the rules.

An interesting question is why Lukaszuk felt the need to wade into a dispute between the feds and the restaurant industry? If Lukaszuk is considering a PC leadership run, casting himself as a champion of Alberta businesses (who violated the laws…) is likely a good tactical move.

Lukaszuk also has long supported restaurant industry proposals. Remember the two-tier minimum wage Lukaszuk brought in at their behest? Or the trial balloon in his recent review of the Employment Standards Code musing about whether is should be easier for restaurants to hire 12- to 14-year-olds as well as expanding child labour into theatres and janitorial services?

It is also strange that Lukaszuk is hot on TFWs again when, in 2011, he was suggesting what Alberta really needed was permanent immigrants:

Indeed, Lukaszuk was quite down on the effect of TFWs on Alberta communities:


Mr. Lukaszuk: …Well, transient communities would be one answer, individuals who do not purchase houses, cars, who don’t invest in our economy but send remittances back home. There is a social impact on families over here, but just having come back from the Philippines, I had the opportunity to see the other, those families who are left behind by temporary foreign workers. The impact is economic and moral, and it’s immense. Alberta Hansard, February 23, 2011, p. 15

Hmmm. Overall, its been a tough week for Tories in electoral trouble as the ugly truth about the TFW program comes home to roost.

The Canadian Centre for Policy Alternatives has just released a report entitled Unions and Democracy. This paper addresses the impact of unionization outside of individual workplaces and thus suggests that recent government attacks on unions will have a negative effect on equality, engagement and participation--foundational aspects of democracy. The broader question this paper raises is whether these attacks on unions are in fact designed to cause these outcomes.

The Journal of Safety Research a has published a new article on injury among young Canadian workers (< age 25). “Work-relatedinjury underreporting among young workers: Prevalence, gender differences, andexplanations for underreporting” found that 21% of respondents reported experiencing a lost-time injury during their careers.

Of those indicating a lost-time claim, 27% did not report their injury to either a doctor or their employer (or both). Male respondents were more likely to not report and injury than female respondents. Non-reporting was justified in a number of ways, including low severity (81%), expected reaction of others (3%), repeated, lagged or non-attributable injury (3%), lack of knowledge (2%), blamed self (2%) and too much effort to report (2%).

There are a number of limitations with the study. Its value is it provides further evidence that (1) the employment of young persons is hazardous and (2) that even serious (time-loss) injuries go unreported. This is important as Alberta considers changes to its Employment Standards Code which include expanding the types of jobs that adolescents (12-14) can do (e.g., janitorial work) and reducing the safeguards associated with such work (e.g., safety checklists in the restaurant industry).

Suppression matters for two main reason. First, it often denies workers benefits in the short term. Second, and more concerning, is the long-term impact of suppression on workers’ eligibility for benefits if they fail to make a claim (i.e., there is no paper trail that the injury is work-related) and experience a recurrence of the injury later on that seriously compromises their ability to earn a living.

The findings of the Manitoba study are disturbing, but not all that surprising. The short version is:


The nature of the problem and the method make it very hard to convey “hard” numbers and we should use these numbers with a great deal of caution. That said, the report suggests that overt and passive claim suppression is a significant factor in Manitoba. It would be interesting to see similar estimates from other jurisdictions.