Poverty, sex and the working poor 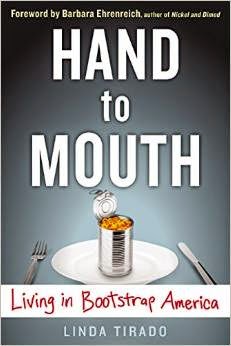 Over the holidays, I had a chance to read Hand to Mouth: Living in Bootstrap America. Author Linda Tirado is one of the working poor—holding multiple jobs at or just above minimum wage with few or no benefits and zero job security—and provides pretty blunt insight into a life without hope as well as the logic of grinding poverty.

She explains the oft-cited lack of work ethic among low-wage workers (would you go all out if you worked two jobs for minimum wage for jerks and could be fired at will?) and the constant state of emergency that poverty brings. She debunks most advice for pulling oneself out of poverty (assuming she pinched every penny and absolutely nothing went wrong, she estimates she could save a whole $260 a year).

Entertainment costs. Movies, bowling, whatever you can think of that nice folks do on dates that don’t involve sex—that’s all a luxury. When you have nothing in your wallet and nothing else to do, sex is really good for killing time. I’ve spent more than one afternoon in bed because it was the only entertaining option I had. Give the choice between a) sex minus boredom, and b) celibacy plus boredom, I think we all know which one is preferable.

This gives rise to judgments about the morals of the working poor:

That does mean we’re indiscriminant. We do not simply drop trou and rut like animals upon spotting another human that we might be able to fuck. We have sex for the same reasons rich people do—we are in love, we like someone’s smile, someone made us laugh. Sometime’s they’re cute and there’s a spark.

Overall, a very eye-opening book that identifies classist assumptions and the systemic issues that create and sustain poverty. Particularly poignant are her thoughts about the inter-generational nature of poverty and how poor people are judged for things they essentially can’t control:

I’m not preparing our kids for a gentle world full of interesting and stimulating experiences. I’m getting them ready to keep their damn mouths shut while some idiot tells them what to do. I’m preparing them to keep a sense of self when they can’t define themselves by their work because the likeliest scenario is that (unlike doctors and lawyers) they will not want to. I’m getting them ready to scrap and hustle and pursue happiness despite the struggle.

I think a lot of what people see as bad parenting is simply that our kids have different expectations, It would make any sense to take wealthy kids and prepare their brains for drudge work. And it doesn’t make much sense to take poor kids and prepare them to seek fulfillment from work. That’s not how it goes for us. If the find it, that’s fantastic. But odds are. They will work just as many zombie jobs as they will good ones.

Tirado’s writing is (ahem) a bit “earthy” and oscillates between hilariously insight and extremely angry (this isn’t an easy book to read). But it is worthwhile.