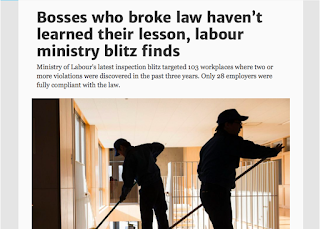 The Toronto Star has done a good job reporting on the rampant employer violations of Ontario’s Labour Standards. A few weeks back, it published an important piece about how many employers simply ignore the rules, even after getting busted.


Almost three-quarters of employers with a “history of non-compliance” — the targets of the ministry’s latest round of inspections — were revealed to be still violating employment standards, according to a detailed breakdown of the investigations requested by the Star.

This is not surprising. There are minimal (and often no) consequences for employers who violate employment laws. Minimal penalties reflects that these violations are seen as regulatory failures (i.e., unintentional errors that employers will correct if pointed out) rather than what they really are: intentional law breaking deserving of sanction.

The high rate of recidivism among employers (a common issue in all jurisdictions) reveals the “regulatory violation” approach to be incorrect and ineffective. This matters because employment law is mostly complaint driven: the government relies on workers to report violations.

As David Weil writes in his paper “Broken windows, vulnerable workers, and the future of worker representation”, workers are unlikely to report violations if they perceive reporting as useless and ineffective. This then sets the stage for greater violations as employers learn that the laws have no meaning.

Alberta is currently reviewing its Employment Standards Code (which was last meaningfully amended in 1987). Among the changes foreshadowed by the survey document is an emphasis on greater enforcement.


To support the resolution of complaints in a timely manner and improve the government’s ability to deal with repeat offenders and uncooperative parties, options for new enforcement tools are being considered to support a progressive and clear system of employment standards enforcement (Section 4).

The tools mooted include progressive penalties (including ticketing employers), greater ability to recover stolen wages, increasing how far back in time the government can issue wage orders for, and increased prosecution of offenders. The government also queries support for public naming and shaming of employers who steal wages and fail to make restitution.

Should the government adopt any of these strategies, a key issue will be one of resourcing. As I noted in November, there are only 45 employment standards officers in Alberta. They presently handle about 5400 claims a year and are responsible for enforcing the rules for over 1 million employees.

I enjoy reading your articles Bob. Thank you. Bonnie-Lou Dobbie