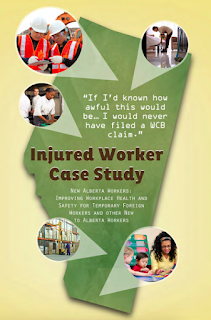 The Alberta Workers’ Health Centre recently concluded a multi-year project aimed at improving the health and safety of new Alberta workers. The summary report is here.

One of the most interesting outcomes is a case study of a new Alberta worker who was injured on the job. "Betty" experienced great difficulty in obtaining compensation for a debilitating workplace injury.

Among the challenges Betty faced were:

1. Neither her doctors nor her employer reported her injury to WCB. Continuing to work while injured lead to an intensification of her injury, which has now resulted in a permanent disability.

2. When she finally filed a WCB claim, her employment was terminated.

3. The WCB jerked her around in accepting her claim, including treating a specialist medical diagnosis as just a preliminary opinion.

4. The WCB made multiple changes to her wage-loss benefits, often without notice to her and have yet to pay her everything she is owed.

5. The WCB assessed her as able to secure work in a job that does not meet her medical restrictions and which does not exist. After several months of job search assistance, the WCB then deemed her to hold this job and cut off her wage-loss benefits.

Betty is now unemployed with no income and, because of her injury, has no reasonable prospects of employment. Betty’s case is both fairly typical and fairly spectacular.

It is typical in that many injured workers face these problems.

It is spectacular in that Betty’s faced almost every problem injured workers possibly could face in filing a claim and she documented how poorly the WCB treated her.

Betty’s overall assessment is “If I’d known how awful this would be… I would have never applied for WCB.” Hopefully, the WCB Review that was conducted over the last year will address some of the systematic problems.