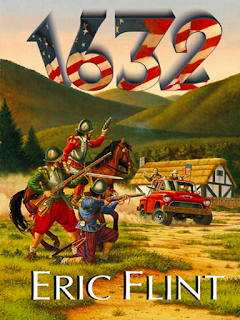 This week’s installment of Labour & Pop Culture examines the novel 1632 by Eric Flint. Last fall, Mark McCutcheon and I published an article about the absence of trade unions in science fiction and this is last of the examples of unions I sci-fi that I’ll delve into.

In 1632, Flint throws a small modern–day Appalachian mining town back in time to the middle of Europe’s 30 Years War. A historian and labour activist, Flint gives the local chapter of the United Mine Workers of America (UMWA) an important political role in the story—providing an organizing structure, principles and leadership cadre as the characters cope with the violent and autocratic world they face.


He [Mike] forced Simpson away from the microphone with his own equivalent of assertive self-confidence. And if Mike's aura carried less of authority, and more of sheer dominance, so much the better.

Mike gave Simpson a glance, lingering on it long enough to make the gesture public. “We haven't even got started, and already this guy is talking about downsizing.”

The gymnasium was rocked with a sudden, explosive burst of laughter. Humor at Mike's jest was underlain by anger. The crowd was made up, in its big majority, of working class people who had their own opinion of “downsizing.” An opinion which, unlike the term itself, was rarely spoken in euphemisms.

The displaced mining town introduces several democratizing strategies to the early modern society in which it finds itself, strategies like “committees of correspondence” that disseminate democratic principles and distribute social services such as food, education, protection to citizens in adjacent cities, thus creating a democratic insurgency in otherwise autocratic states.

While 1632 frames unionization as a way to democratize society by undermining existing power structures and hierarchies, the ultimate goal of these actions is to facilitate a transition to industrial capitalism to bolster Grantville’s sole strategic advantage in the 17th century. In this way, the progressive social role of unionization identified with enlightened modernity (not to mention American patriotism). Alternative forms of organization (such as co-operatives and credit unions) are hardly mentioned anywhere in the book series and only in passing.

1632 creates an alternative universe wherein trade unions are considered normal and undertake constructive, progressive social functions: the democratic principles and processes that underlie trade unionism become a model for democratizing an autocratic society. That said, 1632 valorizes an avidly capitalistic future, as if capitalism remains an important precondition for political democracy. All Flint’s characters ultimately seek to achieve is to make the political economy of the 17th century world in which they find themselves more amenable to 20th-century middle class values.

You can get a free e-book copy of 1632 on the publisher’s website.