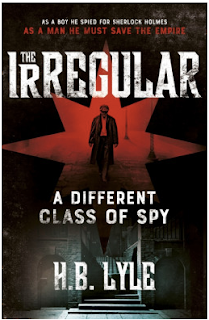 This week’s installment of Labour & Pop Culture is the 2017 novel “The Irregular” by H.B. Lyle. The setting is London in 1909 and the main character is Wiggins (I’m not sure we ever learn his first name). Wiggins is an adult version of one of Sherlock Holmes’ Baker Street Irregulars—a group of street urchins periodically employed by Holmes in his cases.

The novel is historical fiction, mixing facts with fiction to create a fairly decent thriller. Wiggins is recruited by the government to form what will eventually become MI5 and MI6 (he becomes Agent 00). His task is to unravel a spy ring in a munitions factory that is leaking secrets to Germany. There is a separate plot line about Wiggins seek to avenge the death of one of his friends at the hands of Russian anarchists.

Unions and workers form part of the backdrop of the story. London in 1909 is a pretty nasty place for the working class. There are rallies and protests (not covered by the press), with Marxist revolutionaries mixing with workers wanting 8 hour work days and decent pay and suffragists wanting the vote. The government’s response is to try to suppress demands demands made by the working class, often with the police.

It is interesting that the workers are painted with a fair bit of sympathy by the author--particularly with regard to the immigrants who came to London from all over the world. Indeed, Wiggins is clearly of the lower class, in his appearance, manners, and values. Yet his main job is to save the empire—which treats his fellow workers so shabbily. It will be interesting to see how this conflict plays out in future novels.