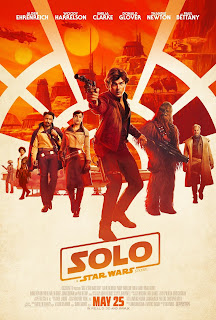 This week’s installment of Labour & Pop Culture examines the new movie Solo: A Star Wars Story. The film reveals the origins of the Han Solo character. This post contains some spoilers so you may want to stop reading if that bothers you.

The film introduces Solo as an orphan on the ship-building word of Correllia. Orphans are made to steal for criminal gangs in order to survive. This premise a very 19th-century, Dickensian feel to it.

Solo’s only way out is, ultimately, to join the Imperial Navy. Taking the king’s shilling was historically a common pathway out of poverty for lower-class British males

Solo eventually hooks up with a criminal gang but a botched heist puts him in a debt bondage to a bad guy. Relationships within the criminal gang (and between gangs) turn out to be very all-against-all and serve as a nice metaphor for the competitive individualism of capitalism.

Action eventually shifts to the mining planet of Kessel where slavery and ecological destruction are evident. While a heist is underway, Lando Calrissian’s robotic co-pilot triggers a slave revolt, which causes the destruction of the enterprise. It was interesting how quickly control slipped away from the mine’s operators.

More hi-jinx ensue and we eventually get to the climax of the story. Solo only manages to get out of the resulting jam he’s in by working collaboratively with others who are seeking to overthrown the corporatist fascism advanced by the Empire. Overall, some interesting commentary on labour and work in a galaxy far, far away.