Poverty wages okay if you're an Alberta public-sector worker 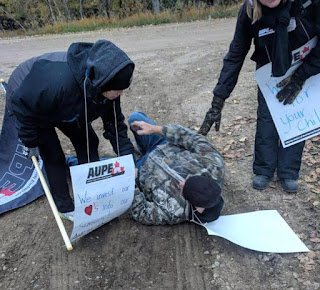 On September 28, support staff in Living Waters Catholic School District went on strike. Living Waters and AUPE have been negotiating for two-and-half years and the key sticking points appears to be a wage increase (to cover the cost of living) and having defined hours of work.

Living Waters operates schools in Whitecourt, Slave Lake and Edson. Support staff include educational and financial assistants, library clerks, maintenance staff, secretaries, typists and custodians. They are the people who allow the school system to operate.

Educational assistants make a maximum of $26,500 per year. This reflects low wages and sporadic (and declining) hours of work. Some workers are forced to rely upon the food bank to feed their families. Despite this, the school board refuses to address these issues and applied for a lock-out.

The first week of picketing included two picketers being struck by cars driven by administrators. The RCMP took no action about these events, instead focusing their efforts on escorting administrators and scabs across the picket lines.

A return to the bargaining table in early October yielded no agreement. Not surprisingly, parents and students are siding with the strikers—joining them on the picket lines and making supportive social media posts. It will be interesting to see what effect this has on the next school board elections.

The school board’s hard line is difficult to fathom. The district has been posting operating surpluses and has admitted it could afford to give raises. Bargaining to impasse in these conditions seems irrational. I would guess the district is picking up on the government’s messaging that public-sector wages must be frozen for two years.

Yet does this government requirement jive with the government’s messaging around the minimum wage? In justifying a 47% increase in the minimum wage over three years, the Notley government has been quite explicit that it is not acceptable for workers to earn below-poverty level wages. For example:

So the government is happy to raise private-sector wages to prevent workers from having to go to the food bank. But it’s somehow cool for public-sector workers to make so little that they have to use the food bank?

That’s a pretty hypocritical position for the government to advance. It’s also a politically strange one, since the government will require public-sector votes if it expects to be re-elected. More importantly, it's a shameful way to run a school system.

What is fueling such a "politically strange" position for the government? I genuinely wonder what the benefit is on this stance.