A few years back, some colleagues and I surveyed 2000 Alberta workers about injury and safety. One of our findings was that only about half of employers complied with basic OHS requirements, such as performing a hazard assessment.

The study found only 50% of employers had a hazard assessment. This is a pretty shocking level of non-compliance. Not surprisingly, there was some eye rolling and quiet suggestions that we were out to lunch. The politest criticism was that “how would workers know if there was a hazard assessment?”

Questioning the validity of studies is part of a well-known set of employer strategies to delay dealing with OHS issues. It comes after denying there is an issue and before employers buy their own study to show there is no problem.

So, a couple of years go by and then I ran across this graphic in the August 2020 issue of Alberta’s OHS e-news. 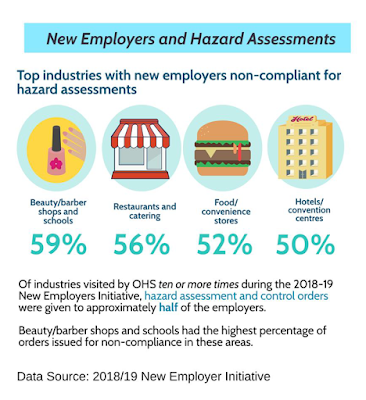 The crux of it is that OHS inspections of new employers during 2018-19 found pretty high levels of non-compliance around hazard assessments (50-59% in the four worst-offender industries). It is important to note that these findings were for new employers in industries where OHS visited 10+ times and these were the worst-performing industries. This means we shouldn’t carelessly generalize from these findings to every employer.

Second, that these inspection results generated similar results to worker surveys, suggests that worker surveys may actually generate valid and reliable data about employer practices. That is to say, workers do actually know what is going on in the workplace in terms of safety.

Third, the worst industries for not having met the most basic OHS requirement—beauty parlours and school, restaurants and catering, food and convenience stores, and hotels—are many of the same industries that will benefit from Alberta looseningits child labour laws.

Specifically, Alberta is loosening the rules for 13- and 14-year-olds to allow them to do more restaurant work and light janitorial work. (The exact details on this as still sketchy, but 13-year-old janitors sounds pretty dumb no matter what the details.) So, basically, the UCP is sending vulnerable kids into workplaces that we have good evidence to indicate they don’t abide by OHS rules.