Sean Tucker and Anya Keefe from the University of Regina have released their annual report on workplace fatalities and injuries. This year’s report rolls up the 2020 data but also includes a section on COVID-related injuries and fatalities from 2020 and 2021.
The nub of the report is that, nationally in 2020:
Specific to Alberta in 2020:
I have nicked the relevant graphs from the report: 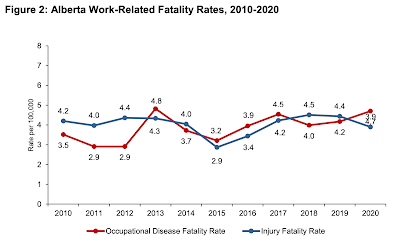 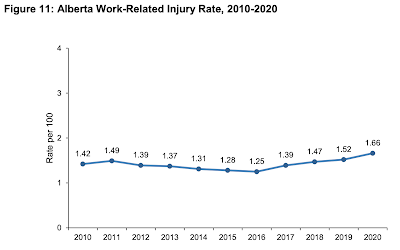 Looking at COVID claims:
Alberta had the second highest number of COVID-related fatality claims accepted (31) in 2021.
Alberta seems to be performing markedly worse than BC (despite BC’s slightly higher population). That said, it is a bit hard to know what to make of COVID claims data at this point because they may be affected by WCB policies as much as anything else.

Posted by Bob Barnetson at 8:54 AM