Presentation: Incidence of work and workplace injury among Alberta teens

This morning I’m going to present some data about the incidence of work and workplace injury among Alberta teens. This data was gathered by the Alberta Workers’ Health Centre, which is a not-for-profit funded by labour groups as well as the Law Society of Alberta.

One of the Health Centre’s activities is delivering theatre-based education about workplace rights to about 15,000 Alberta junior- and senior- high-school students each year. After each show, students fill out program evaluations. And these evaluations provide a useful source of information about the rate of work and workplace injury experienced by adolescents (12-14) and young persons (15-17).

The quantitative data is a convenience sample of nearly 2000 questionnaires from 2011/12 . A larger sample of 6000 questionnaires spanning 2008-2012 was subject to qualitative analysis, although only a minority of these responses contained relevant data. We should be very cautious about generalizing from non-random samples. That said, these results broadly mirror the literature, both in Canada and abroad.

But lots of kids work—so what?

The key is in the injury data. Of those respondents who were employed, 49.7% of adolescents and 59.0% of young persons reported at least one work-related injury in the previous year.

This is a staggering level of injury—maybe two or two and half times the rate of workplace injury in the overall population. This suggests that Alberta’s complaint-based approach to regulating child labour and occupational health and safety is not effective.

Table 1 outlines the number of reported adolescent injuries by type. The data does not allow us to distinguish between single and multiple instances of a specific type of injury during a year so these numbers likely under-report the frequency of injury overall. 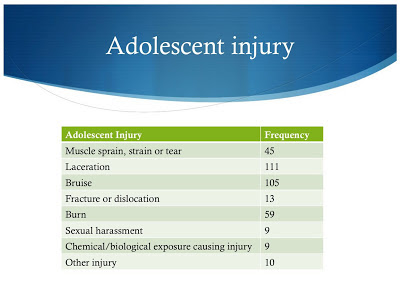 Where specified, other forms of injury included eye, temperature- and animal-related injuries.

Table 2 outlines the number of reported young person injuries by type. Again, this is likely an under-estimation of total injuries because of the way the data was collected. 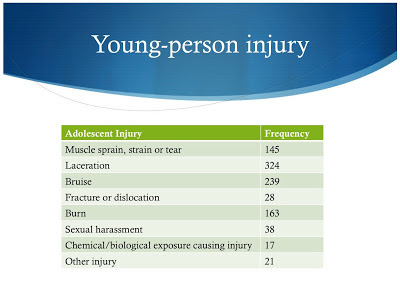 There are very concerning numbers that suggest adolescents and young persons are routinely working in injurious conditions.

When asked, 57% of adolescents reported no hazard identification when the started work and 66% reported no safety training. Young persons were more likely to receive both.

I often get quite a bit of flak when I point out the consequences of ineffective regulation of adolescent and young person employment in Alberta. Some folks say these jobs and financially necessary and build important employability attitudes and skills.

Certainly there is some truth of those claims. Both is child labour really the best solution to family poverty? And is robotic obedience in mindless jobs for low wages with a high risk injury really the kind of attitudes and skills we want our children to develop? Probably not.

To be fair, the employment of adolescents and young persons has its pros and cons. The issue, in my mind, is whether it is adequately regulated. I think hearing from these workers can help us appreciate what these statistics about injury mean to young workers. So let’s start with some of their stories about injurious work:

I was stuck fencing with a 12-year-old using 5 tonnes of equipment with no way to contact for help. I was the oldest one there. That’s retardedly unsafe. (15-year-old male)

What is disturbing here is that the voice of reasons around workplace safety is a 15-year-old boy. Fifteen-year-old boys aren’t generally known for their good judgment. What were the adults who assigned this work think?

A manager tried to make me clean blood and I refused saying I could contract AIDS potentially. (15-year-old female).

I quit because my supervisors were drinking on the job and leaving me to work the kitchen which I wasn’t legally allowed to be in. (grade-10 female)

I was told to do work after passing out. My supervisor said too bad I had a job to do and I said no, I got fired. (16-year-old female)

I got told by an employee that everyone does drugs and if I told anyone I would not be allowed to work there in future. (14-year-old female)

These circumstances are precisely the kinds of harms contemplated in Alberta’s child labour laws—circumstances that pose physical, intellectual and moral risk. Of particular concern was the large number of written comments regarding sexual and other forms of harassment in the workplace:

I got sexual harassed (by another store associate) recently and my manager didn’t do anything about it. (grade-11 female)

My manager was hitting on me. (female)

When I do my paper route there is a man who is always following and watching me. I went to the (employer) and asked for a different route. (12-year-old male)

Sexual harassment when I was 13 (by employer). The harassment I didn’t realize until a few months ago. (18-year-old female)

The creepyness of guys dropping things so I picked them up and they look at my ass. (grade-10 female)

And here is the one that stops me cold, since I have a nine-year-old daughter.

I was at work and one of the older men followed me to the washroom and tickled me then reached up under my shirt and grabbed my boob. I did nothing because I was only nine, so who would have listened to me. (16-year-old female).

So, she’s nine and she’s working. Likely she’s working in a family restaurant—which is a set of circumstances lots of folks are prepared to give a pass on child labour laws. And she gets sexually assaulted, And, at nine, she knows she has no recourse.

This raises the question of why don’t adolescents and young persons report their injuries?

I burned myself on a piece of metal. (I didn’t report it) because it was my fault. (grade-10 male).

I never reported (the injuries) because I could still work and one time because I was working “under the table” (cash job) so I took a few days off because I couldn’t work. (grade-11 male).

Sexual harassment, bullying, I got my eye cut up. (I didn’t report it because) I was too scared. (grade-12 male)

The guy fired me cause I got sick because of mold. (I told my) mother and she talked to the boss and he fired us. (grade-11 male).

I told my manager (about my injury) but he didn’t do anything about it. (I didn’t report it because) I didn’t necessarily know what to do. (grade-10 male)

(I didn’t report the injury because) my boss said to walk it off and put some ice on it. He fired me the next day. (grade-11 female)

I burned myself on a fry basket and I told a manager right away. They said to be more careful. (grade-10 female).

(I reported the injury to) my manager. She didn’t do anything. She said it took too much work. (grade-12 female)

(I didn’t report the injury because) I’ve learned there’s no point to report things with court etc is bullshit. (grade-11 female)

(I didn’t report the injury because) I thought it would go away but I was wrong. It has been almost 2 years since I quit… and I still have it. (grade-12 female)

Workers also had some useful things to say about the safety training they were and weren’t given.

People should be more aware of the danger of the job and they should be told. You can’t expect them just to know (16-year-old male).

Again, a 16-year-old boy states the blindingly obvious. Yet 57% of adolescents don’t have hazards identified for them and 66% don’t get any safety training. This should cause us to question whether adults are really taking enough care when employing minors.

An actual written procedure about how to clean the grill and deep fryer rather than just “be careful”. (17-year-old male)

I wasn’t trained until 2 years after I (started) work there. I had to figure everything out for myself. (17-year-old female)

(Training would have been better) if someone who was only working there for 2 weeks wasn’t training me. It was like the blind leading the blind. (grade-10 female)

Overall, the data collected by the Alberta Workers’ Health Centre paints a pretty disturbing picture. Teenagers face significant risks in the workplace and there are few remedies available to them. And this adds to the growing literature that suggests complaint-based enforcement of child labour and occupational health and safety laws is not effective at preventing injury among this vulnerable population.

Posted by Bob Barnetson at 8:33 AM

Deleted idiot spammer. Do they really think I don't watch for this stuff? Sheesh!