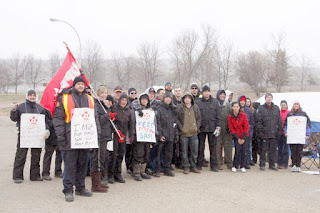 There is much less information available about possible changes to the Labour Relations Code, although the mandate letter sent to Andy Sims (who has been retained as a consultant) is an interesting read. It was last significantly amended in the late 1980s and creates structural barriers that impede workers from freely exercising their associational rights.

Amendment of the Labour Relations Code will likely address three key issues: card-check certification, remedial certification, and first-contract arbitration. A fourth option to consider is enshrining protection for concerted activity in the Code.

To unionize a workplace in Alberta, a union must demonstrate that at least 40% of the workers want to join the union and then, about 10 days later, win a certification vote held by the Labour Relations Board. The 10-day delay between application and vote gives employers the opportunity to pressurize workers to vote against the union.

The most robust analysis is of BC’s move from card-check to mandatory votes in 1984, which saw a 50% reduction in certification drives and a 19% reduction is successful private-sector drives. A return to card check certification in 1993 saw the number of organizing drives increase, as well as a 19% increase is successful private-sector unionization drives.

The absence of any effect of these changes on public sector unionization (where employers are less likely to oppose unionization) suggests that requiring mandatory votes enabled employers who opposed unionization to thwart drives by giving the employer notice of the drive and time to act against it. Other studies have found similar card-check effects.

Returning Alberta to card-check certification will increase both the amount of organizing and the success rate of organizing drives. Employers often argue that mandatory secret-ballot votes are essential to democratic processes. Mandatory secret ballot votes are essential when one is electing a government, which has the power over one’s liberty and life. The argument that a vote is necessary when choosing a bargaining agent is less compelling, especially given that mandatory votes help employers interfere with a decision that properly belongs to the workers.

Currently, if an Alberta employer meddled in a union certification drive the Labour Relations Board has no effective remedy to issue. The best the Labour Board can do is conduct a second vote. But, if the employer has already poisoned the well, taking a second drink is unlikely to improve matters for the workers.

The government of Alberta could also enhance workers’ ability to exercise their associational rights by providing for first-contract arbitration (FCA). Under FCA, if collective bargaining reaches an impasse when the union and employer are negotiating a first collective agreement, either side can apply for resolution via arbitration, rather than being forced into a strike and/or lockout.

The need for FCA reflects that some employers will stonewall the union during the first round of bargaining in the hope of breaking the union. The purpose of collective bargaining is to reach a mutually agreeable collective agreement, not to allow the employer an opportunity to re-fight the certification campaign. FCA addresses this inappropriate behaviour by eliminating an employer’s incentive to stonewall.

First-contract arbitration is available in most Canadian jurisdictions. Experience (particularly in BC, Ontario and Quebec) suggests the availability of FCA reduces employers’ incentive to stonewall unions to such a degree that FCA is rarely invoked.

Non-unionized workers have used such protections to pressure employers for higher wages (e.g., the recent Fight for 15) or better working conditions. Workers have also used concerted activity protections as a proxy for the right to refuse unsafe work (collectively) and to protect whistleblowing activity.

These NLRA protections are broader than those usually accorded to workers in Canadian labour laws. For example, the protections set out in Sections 21, 148 and 149 of Alberta’s Labour Relations Code are focused mostly on the formation of or participation in a union. Other associational activity is not protected.

Specifically, a number of scholars are questioning whether Canadian legislation in the Wagner tradition (which practically limits the exercise of associational right to workplaces where a majority of workers favour unionization) will continued to be viewed as constitutional since it precludes so many workers from meaningfully exercising their associational rights.