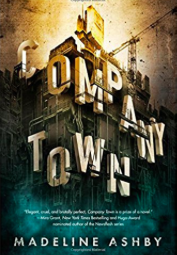 A few months back, Mark McCutchen and I published an article examining the presence and (mostly) absence of unions in science fiction. A book that came out between finishing that research and having it published is Company Town by Madeline Ashby (Tor, 2016).

Set on an oil-rig/town near Newfoundland in the near future (where oil is in decline), this cyberpunk novel focuses on Hwa, who is a (female) bodyguard for the United Sex Workers of Canada. Selling sex has been decriminalized in this future and sex workers have developed a hiring hall of sorts, which provides services, including security, pensions, and a client database.

The novel quickly becomes much more complex (leading to an ending that felt somehow rushed and a bit hard to follow). In this novel, the union essentially serves as part of the novel’s setting and has little to no impact on the plot. This fits rather neatly into the typology Mark and I developed about how unions are treated and used in SF. Unusual among SF treatments of unions, though, Ashby frames the union positively.

a pervasive atmosphere, conditioning not only the production of culture but also the regulation of work and education, and acting as a kind of invisible barrier constraining thought and action (Fisher, 2009, p. 16).

It produces a business ontology that privileges corporate business as the model for all other activities, from political governance to family life, to the extent that “the lack of alternatives to capitalism is no longer even an issue. Capitalism seamlessly occupies the horizons of the thinkable” (Ibid, p. 8).

Capitalist realism not only “[claims] to have stripped the world of sentimental illusions and seen it for ‘what it really is’: a Hobbesian war of all against all, a system of perpetual exploitation and generalized criminality,” (Ibid, p. 11) it also insists on everyone’s “‘realistic’ acceptance that capitalism is the only game in town” (Ibid, p. 15) and leaves little room for collective efforts to negotiate limits on exploitation.

To be fair, the United Sex Workers of Canada does make some efforts to regulate the working conditions of its members and thereby buck the system. But it does so within an essentially hypercapitalist system.

This isn’t meant as a criticism of the novel (which is good), but rather as an observation about the tendency of SF (as a genre) to situate stories within a capitalist framework and thereby constraining how we think about the future.