Bill 30 and the right to refuse 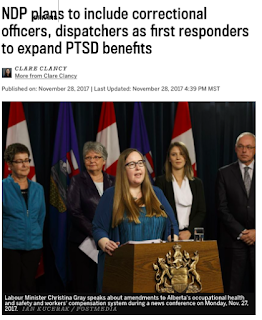 This week, Alberta’s government introduced Bill 30 (An Act to Protect the Health and Well-being of Working Albertans). This legislation replaces the existing Occupational Health and Safety Act as well as amended the Workers’ Compensation Act.

As the changes in Bill 30 are significant, I’ll be making a series of posts over the next week about different aspects of Bill 30.

Today I’m going to examine the right to refuse. Under the current OHS Act, Alberta workers have an obligation to refuse unsafe work if it poses imminent danger to the worker or endanger another worker.

Bill 30 replaces that and establishes a right to refuse unsafe work (which is the Canadian norm):

There are two significant differences. The first is that Bill 30 re-frames refusals as a right instead of as an obligation. While the effect of this reframing is minimal, it sends an important message: a safe workplace is a worker’s right. For a long time, Alberta’s lax enforcement of its OHS laws have created an acceptance that it is okay to trade worker safety off against employer profitability. Setting out safe workplaces as a right serves an important normative function.

This definition limits refusals to situations where a worker faces an unusual danger. Regular dangers don’t qualify. This definition allowed employers significant wiggle room when confronted with a refusal and makes it harder for workers to resist unsafe working conditions.

For example, repetitive motions are a normal part of cashier work. The danger they pose is that they lead to repetitive strain injuries (e.g. carpal tunnel). Under the old Act, repetitive motions is a normal danger and there would be no right to refuse. Under the new Act, I would suggest a refusal is possible. This ought to motivate employers to better address hazards that have been built into the production process.

The new language also contemplates a role for joint health and safety committee members in investigating refusals and it requires the employer to disclose the hazard to any other worker directed to do the work. This reduces the ability of employers to leave hazards unremediated by just asking some other worker to do the unsafe work (a common employer tactic).

Three quick observations:
Overall, this amendment to the OHS Act is a significant improvement in the legislative language around refusals. Whether it will meaningfully affect Alberta workers is an open question that will depend upon the government’s efforts to education and enforce the law.