Bill 30 and workplace harassment and violence 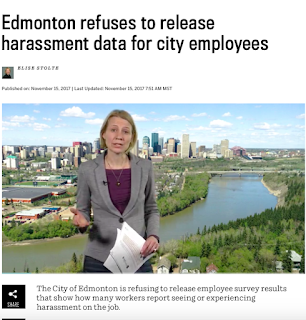 Continuing our look at Bill 30 (An Act to Protect the Health and Well-being of Working Albertans), today I wanted to examine new rules about violence and harassment in the workplace.

3(1) Every employer shall ensure, as far as it is reasonably practicable for the employer to do so,

(c) that none of the employer’s workers are subjected to or participate in harassment or violence at the work site,

There are similar obligations for supervisors and a requirement for workers to refrain from causing or participating in this behaviour. Harassment and violence are defined this way

1(q) “harassment” means any single incident or repeated incidents of objectionable or unwelcome conduct, comment, bullying or action by a person that the person knows or ought reasonably to know will or would cause offence or humiliation to a worker, or adversely affects the worker’s health and safety, and includes

(ii) a sexual solicitation or advance,

but excludes any reasonable conduct of an employer or supervisor in respect of the management of workers or a work site;

1(yy) “violence”, whether at a work site or work-related, means the threatened, attempted or actual conduct of a person that causes or is likely to cause physical or psychological injury or harm, and includes domestic or sexual violence;

Requiring employers to prevent harassment and allowing workers to make OHS complaints if employers don’t do so is a significant change. Workplace harassment is endemic, as evident in a recent series of stories about unremediated harassment of City of Edmonton employees. Being able to file an OHS complaint gives workers a much faster remedy for harassment than using internal complaint procedures or (if unionized) filing grievances.

It will be interesting to see how OHS officers handles such complaints and how this requirement interacts with the new language around the right to refuse unsafe work. If my boss is a yeller, for example, (and mine is not!) and if that causes me significant distress, can I refuse to interact with her if her yelling has no meaningful relationship to legitimate management activities? And what if my boss is an ass grabber or a low-level racist? Will we see OHS orders that specify so-and-so is not to grab workers’ asses? Or is precluded from interacting with specific subordinates?

How will this work in a small workplace where the boss is the owner and the boss is a serial harasser? Will OHS preclude the boss from attending the workplace? Can I refuse unsafe work indefinitely (and continue to get paid) if the boss remains in the workplace? I suspect no one has really thought this through. This is going to be super interesting and will pressure employers to act on misconduct that often just gets a pass these days.

The explicit requirement for employers to protect workers from violence addresses, in part, a 2011 case where a women was murdered by her spouse at work. Despite being aware of the threats against her, her employer took no steps to protect her. The government promised to address this issue in 2015. More recently, there was a disturbing story about assaults on City of Edmonton bus drivers.

An interesting question is how this requirement will interact with the recently legislation designed to protect gas station and convenience store staff (Bill 19). This legislation amended the OHS Code and requires employers to have so-called violence prevention plans in place. Unfortunately, these plans are really robbery prevention plans and will have little effect on violence.

As I have argued elsewhere, what Bill 19 reflects is a saw-off: the government got good press and support from industry around (long-needed) gas-and-dash legislation and, in return, took a pass on violence-prevention requirements (e.g., bullet-proof barriers for clerks) that employers opposed because they are costly.

Fast forward to Bill 30 and employers now have an obligation to take reasonably practicable steps to protect workers from violence. So will the next employer whose convenience store clerk gets killed because there were no barriers be able to rely upon their violence prevention program to evade charges under the OHS Act? Installing a barrier is a reasonable practicable step to prevent such a death even if barriers are not required by the Code. Failing to install one (even if it is not required under the Code, which sets out absolute minimums) seems to violate the Act.

One of the most interesting immediate effects of adding harassment and violence in workplaces is that these behaviours have now been identified as (1) wrongful and (2) threats to workers health. I am already hearing reports of workers reading media reports and reframing their negative workplace experiences as the fault of their employer.

Combined with the recent flurry of harassment allegations against (and consequences for) powerful actors in Hollywood, I wonder if this legislation will contribute to new norms and expectations in Alberta workplaces? The City of Edmonton’s rapid shift from denial to action on harassment being an example of how this could play out.