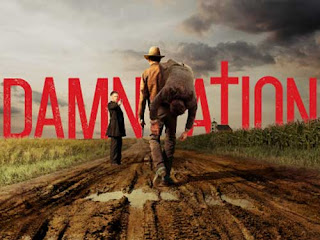 Rainy summer days are a nice time for TV. I have been working my way through the Netflix series Damnation.

The series is set in the rural America in the 1930s (but filmed by Calgary). It follows local preacher (of sorts) Seth who rallies local farmers facing price fixing by local business folks who are in league with the nasty banker.

The bad guys then bring in a strike breaker (Creeley) who kills strikers. While this seems a touch dramatic, it is based upon the strike breaking activity of private detective agencies like the Pinkertons (in the story, Creeley is a Pinkerton).

Episode 1 ends when Seth responds by nailing the dead man up to the bank door with the sign “which side are you on?” around his neck. (Which Side Are You On is a 1931 miners’ strike song from Harlan County—which is also (sort of) covered in the series).

Episode 2 features white supremacists and explores how the newspaper aligns itself with the interests of the local business people. Episodes 3-5 explores escalating conflict over farm foreclosures and an effort to split the farmers up to undermine their strike. A lot of people die in this series.

There are three strong female characters in story (a sociopathic strikebreaker, the preacher's radical wife, and a very cagey prostitute), which is nice to see given the tendency of unions of be viewed as “male” organizations and the limited roles of women in the 1930s. I’m hopeful we’ll see more of them in the second half of the series.

I’m pretty keen to finish this series and see how it plays out. There is some larger conspiracy by industrialists at work in the series that I’m keen to see revealed.