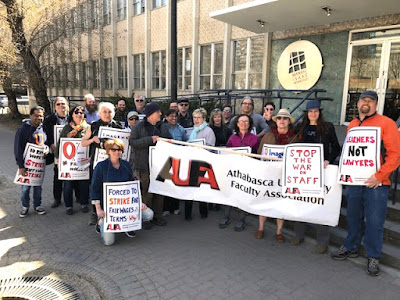 This afternoon, 20 members and 4 allies of the Athabasca University Faculty Association (AUFA) picketed the place of business of Athabasca University (AU) Board of Governors (BoG) chair Vivian Manasc. This was AUFA’s third information picket. We had 12 first-time picketers, including one who said "Is it a little weird that this is the only time I get to meet my colleagues?" 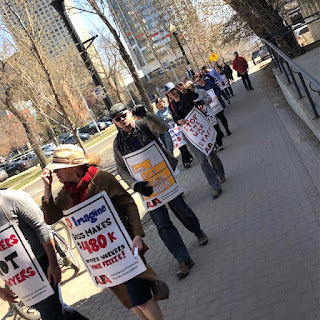 The purpose this picket was to show AUFA members’ growing displeasure with AU’s foot dragging at the bargaining table and demonstrate that, should a work stoppage occur, it will be most unpleasant for individual BoG members. Passersby were handed leaflets outlining AUFA’s concerns. 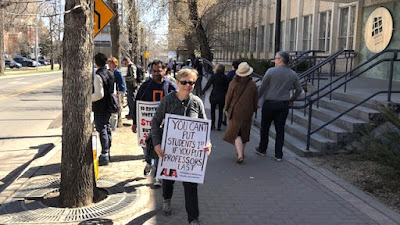 The most interesting part of the picket was an interaction with a worker from Manasc Issac who, while walking through our picket line, volunteered that we should go picket the workplace of AU President Neil Fassina because he is the one who is calling the shots in bargaining. This is the first independent verification we’ve of our suspicion that Fassina is the architect of AU’s bargaining strategy. 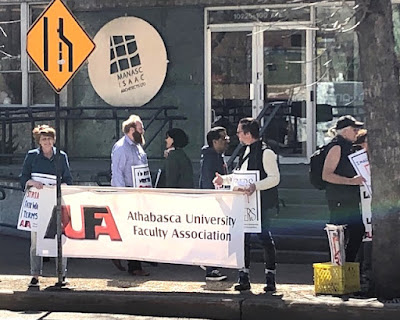 This picketed coincided with AUFA’s 20th (!) day of bargaining. AUFA’s most recent settlement proposal:
This proposal is broadly consistent with other provincial settlements as well as the settlement recently reached between AU and its support staff. 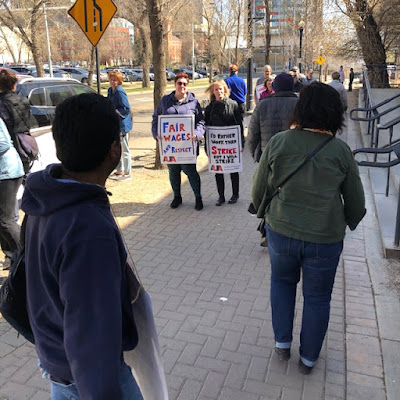 Bargaining was halted after two hours this morning because the employer, who requested the additional session, had no meaningful proposal to make when AUFA got there.

The BoG bargaining team has stalled bargaining since last May. It delayed the exchange of proposals, it advanced unreasonable proposals (that it has since abandoned), and it has been unavailable to bargain for long periods of time. It has also stalled the negotiation of an essential services agreement (which is a pre-cursor to formal mediation) and has now stalled informal mediation until mid-June.

The next dates for bargaining appear to be June 17 and 18 with a mediator. AUFA will be hosting more picketing events between now and then.

AUFA appreciates representatives from CUPE 3911, the Edmonton and District Labour Council, and the Confederation of Alberta Faculty Associations who joined our picket line this afternoon.

Initially you stated that a work stoppage vote would happen around June. Does the delay in mediation affect that timeline?

Thanks for your comment Liam: short answer is yes.

To get to a strike vote, one needs to have gone through formal mediation.

To get to formal mediation, one needs an essential services agreement.

AU has been stalling on an essential services agreement since last November. I suspect we won't have resolution until the summer. Then we go through mediation (although we are trying informal mediation in June).

So a strike vote in the autumn is realistic. Once a strike mandate has been achieved, the union can then call a strike on 72 hours of notice any time during the following 120 days.

I hope that is helpful.