Last week, Alberta’s United Conservative government introduced legislation designed to suspend the arbitration of wage re-openers in most public-sector collective agreements. This move is widely expected to give the government time to cook up wage-freeze or wage-rollback legislation.

There’s good coverage and analysis of this decision elsewhere. One of the more interesting twitter exchanges about this that I saw centered on this tweet by the New Democratic opposition: 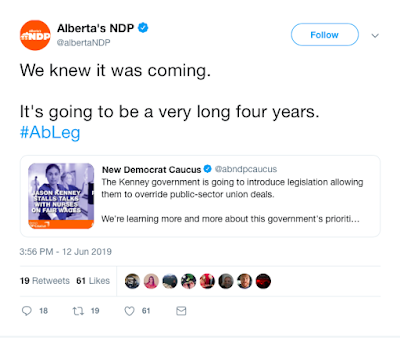 Astute observers immediately queried, if the NDs knew this was coming, why they didn’t lock-in wage increases for public-sector workers (who took two zeros) for subsequent years when they were in government. The NDs didn’t venture an answer, but I’ll take a stab at an explanation.

I see the explanation as having two parts. First, it was in the NDP’s political interest to not agree (either directly as the government or via the government’s agencies, boards and commissions) to any public-sector wage increases. The ND’s re-election strategy was to attract centrists (i.e., less icky conservatives) and that meant avoiding any appearance that the NDs supported maintaining the purchasing power of public-sector workers. Wage re-openers kicked that issue down the road and, in doing so, have made it marginally easier for the UCP to interfere in collective bargaining.

Second, there were no political consequences for the NDs to this strategy. If they won the election, arbitrators would likely give public-sector workers a 2%(ish) cost of living increase and the NDs could shrug and blame the arbitrators (“Arbitrators, AMIRITE?!?”). If the NDs lost the election, then whatever bad happens because of this strategy just becomes political fodder for them as opposition MLAs.

In theory, organized labour should be really pissed at the NDs about this realpolitik strategy, especially given that the unions all helped the NDs by going along with the mandated two-year wage freeze, instead of striking. (It is important to acknowledge that organized labour isn’t monolithic and some unions and activists chose a different path.)

But there is little chance of any public fight between labour and the NDs over this issue. The NDs presently represent the best electoral option for unions and workers. And the NDs and labour are tightly enmeshed, both obvious ways (e.g., individuals often holding positions in both camps or moving between them) and less obvious ways (e.g., the web of friendships among progressives).

Perhaps the lesson here is that relying mainly on electoral politics (especially communications based electoral politics) is a poor strategy for workers and unions. Channeling money into political action committees is certainly an easy path. And, when your party is in power, you get a few modest legislative changes. But, absent a mobilize block of voters and the will and ability to direct their support elsewhere, unions remain a very junior partner.

This approach allows the NDs to avoid important (to workers) legislative and policy changes while in office (e.g., cost of living increases, employment equity legislation, scab bans). And it means, when the NDs eventually get voted out, labour has little capacity to meaningfully resist Conservative efforts to repeal legislative improvements and tear up public-sector contracts.