Alberta’s An Act to Make Alberta Open for Business (Bill 2) is presently before the Legislature. If passed, Bill 2 will allow employer to avoid paying over-time premiums if workers choose to (or are forced to) take overtime as time in lieu (instead of as wages).

Minister of Labour Jason Copping recently tweeted that paid over-time does not change under Bill 2, asserting that his “math” had been “verified by (unnamed) academics and experts”. 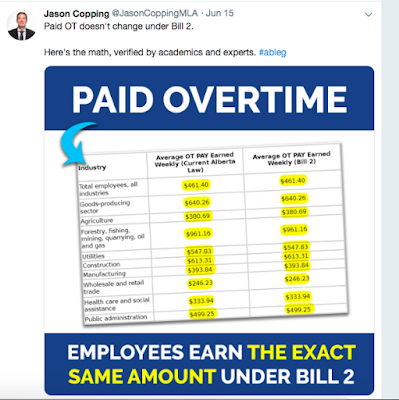 This tweet is partially correct: Bill 2 does not change the overtime pay earned. But the tweet is also deeply misleading in that Bill 2 reduces workers’ ability to realize their over-time pay.

This reflects that Bill 2 creates a loop-hole, wherein time in lieu is paid at straight time. (While, in theory, taking OT pay as time off is agreed to between workers and employers, that isn’t how it works in practice: employer basically just impose it.)

This tweet triggered a flurry of responses basically calling bullshit on Minister Copping. The most data-drive response was by ND staffer Matt Dykstra who used Statistics Canada data to estimate the forgone weekly OT payment per worker by industry if employers forced workers to take time off (instead of paying out OT). 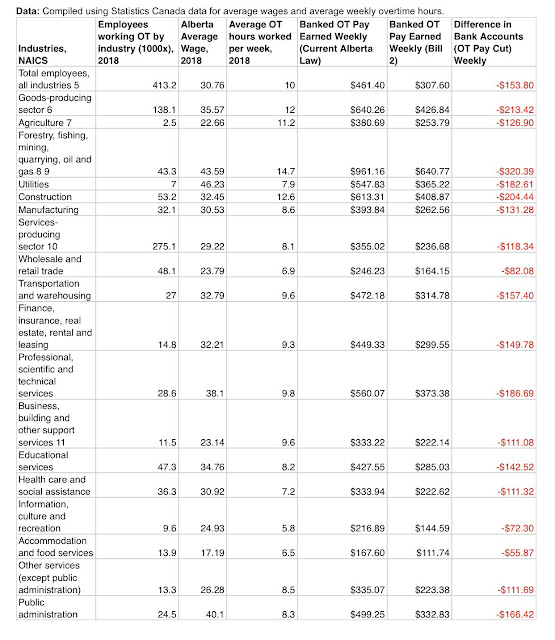 Full disclosure: Matt asked me a couple of weeks back to verify his approach to this calculation, which I did.

For workers who work overtime, Bill 2 creates potential average weekly OT wage loss ranging from $55 to $320 (depending upon industry).

If everyone who worked OT in a week was forced to take their OT as time off, this would create a net reduction in employer wage costs of approximately $63.5 million per week (412,200 workers x $153.80 saved per week). Annually, that works out to $3.3 billion in potential OT savings for employers.

Obviously, this estimate overstates the size of the effect because the estimate does not account for employers that will not force workers to take all of their OT as time off at straight pay (there is no good way to estimate this as far as I can tell).

The value of the estimate is that it illustrates that Bill 2 is a potentially huge gift to employers by the Kenney government. The cost of this gift is borne by workers.

Further, there is no evidence I can find that this change will result in more hiring. Indeed, what it does is incentivize employers with seasonal variation in demand to work their existing workforces harder during peak period rather than hiring more workers.

The Minister suggesting that paid OT does not change under Bill 2 is an astounding act of misdirection. And his tweet tells us that we should be highly skeptical of anything UCP MLAs say.