A few months back, the Ministry of Labour’s 2018/19 annual report was released. This report represents the best window we have into the government’s work on making Alberta workplaces fair, safe and healthy be enforcing the labour laws enacted by government.

It is often difficult to track the resources the government devotes to enforcement of its labour laws. The annual report notes that 32 new employment standards staff were hired in 2018 as were 17 new occupational health and safety officers in March of 2019. Bo overall totals were provided.

There was an 8% increase in employment standards complaints and a 24% increase in cases resolved. The result include net drops in the average delay in investigation (to only 90 days), resolution (to 155 days), complaints resolved within 180 days, and in the backlogged queue of complaints. And 64% of claims of less than $1500 in stolen wages were resolved through an immediate demand letter being sent. This is an impressive improvemet=nt. 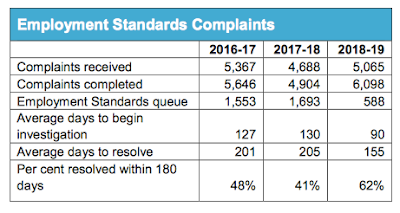 The number of anonymous tips nearly doubled in 2018/18. The number of proactive inspections rose a bit, but is still below 2016/17 levels.

Overall, there seem to be some positive developments (I would guess related to additional staff resources being available). But, on average, workers are still going to wait 3 months before employment standards will even start the investigation. Missing from the report is an assessment of what percentage of stolen wages were recovered.

There was about a 10% drop in OHS inspections when compared to the previous year but a huge increase (almost 50%) in orders written. There were also 479 tickets issued (157 to employers, the rest to employees). Fourteen employers also got hit with administrative penalties of up to $7500. No comparator data was provided. 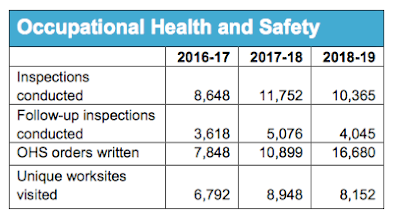 Charges filed against employers for violations were down (16 cases this year versus 26 the previous year). Overall fines issues as a result of prosecution also fell from $4.18m to $2.16m).

There were 773 OHS complaints about harassment or violence at work (reflecting new provisions that came into force in 2018). There were also 52 complaints that workers had been discriminated against for exercising their OHS rights, of which 12 were upheld (some may still be pending).

Some bad news here with injury rates on the rise.

The disabling injury rate is also up again, with 2.71 DIs per 100 person years worked. The target is 2.19. The overall person years worked was not provided so we can’t calculate how many injuries this actually is. This kind of slight of hand obscures the actual performance of the OHS system.

At a guess (using 2017 data), I’d say there were about 28,000 accepted-lost time claims and 52,000 accepted disabling injury claims. These estimates exclude all unreported claims (maybe 70% of these injuries go un-reported). The key points being (1) there are a lot of injuries which (2) suggests the injury-prevention system remains a failure, something that (3) the government hides using measures like claims rates. None of that is new, it is just disappointing that four years of progressive government had basically zero impact.

There were 126 accepted fatalities in 2018, down from about 162 last year (no comparator provided). Fatalities are swingy so it is hard to know what explains this drop after several years of increases. It might reflect declining employment in dangerous industries? Or it might just be data noise.

There were interesting changes in stats at the Alberta Labour Relations Board. The number of certification applications jumped for the second year in a row and have almost doubled since card check certification provisions were added.

There were aso 14 applications for first contract arbitrations. There was also a significant reduction in days lost to work stoppages.


The low 2018 rate (measured per 1,000 employees) may have been influenced by legislative amendments in recent years that requires nearly 300 collective bargaining relationships to meet essential services requirements before a strike or lockout can legally occur. In no case did collective bargaining between parties affected by essential services enter formal mediation, which is mandatory before parties can get to a strike or lockout position. New first contract arbitration may also have diverted some disputes away from strikes and lockouts. (p.42).

I would agree with this analysis.

There were some notable improvements in performance over pervious years, specifically in the processing of Employment Standards complaints. This likely reflects the allocation of additional resources by the former New Democratic government. Overall ES performance is still not great (in that workers must often wait months for stolen wages). The absence of data on overall reclamation rates (wages owed versus recovered) suggests the results are poor.

OHS performance was a mixed bag. Fewer inspections, fewer prosecutions, and lower fines versus more orders. The increase in both the number of injuries and injury rates suggests there is much more to be done here. Resources likely remain a key issue, with hirings occurring at the end of the reporting year. A question for both OHS and ES is whether staffing levels will be maintained under the UCP government. I would bet numbers decline through attrition and a hiring freeze.

Second, there is some indication that the essential services legislation enacted by the NDs in order to protect the public interest while giving public-sector workers the right to strike has (at least temporarily) actually retarded the ability of workers to strike. An interesting question is whether this was an accidental or intentional outcome of the ND's legislation.