Last week, I wrote about Athabasca University’s awful new OHS training. One positive outcome of staff outrage about the training is that they are now talking openly about AU’s hypocrisy around preaching workplace safety while not taking any action on it.
For example, I recently received a bunch of photos of a tripping hazard in the library that has gone unremediated for more than a year despite repeated complaints. 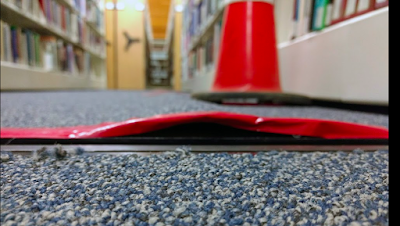 The library has a set of moveable book shelves. These save space by eliminating the need for permanent aisles between the stacks. When you need a book, you crank open space between two stacks and go get it (you can see the crank system in the picture above). 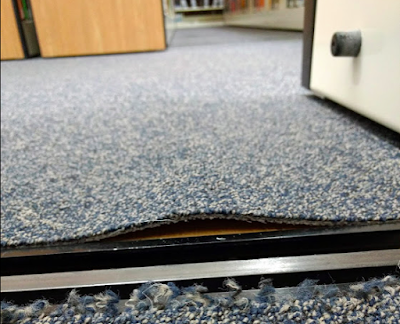 The shelves travel on metal rails embedded in the floor. The rest of the floor is carpeted. The carpet has been pulling up where it abuts the rails, creating a tripping hazard (see above). In a likely related phenomenon, elsewhere the carpeting is buckling (because it is too loose), which also creates a tripping hazard (see below). 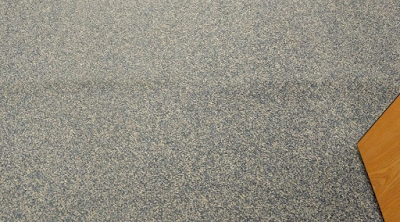 This has been a long-term issue that staff flagged for action in the summer of 2018. While it is easy to dismiss things like tripping hazards as no big deal, falls account for about 20% of serious injuries in Alberta. The vast majority of these injuries are caused by falls on the same level. These are all caused by tripping hazards and are virtually all preventable.

Initially, AU’s response was to promise to glue the carpet down. Because the carpet was normally under the stacks, this could be done only one piece at a time. Because of the smell from the glue, the plan was to do it late on Fridays over a series of weeks so the smell could dissipate over the weekend.

This was a good response. Unfortunately, after a single section was fixed, work stopped for reasons unknown (possibly because the glue didn't work). Shortly thereafter, the lifted sections were duct taped down. 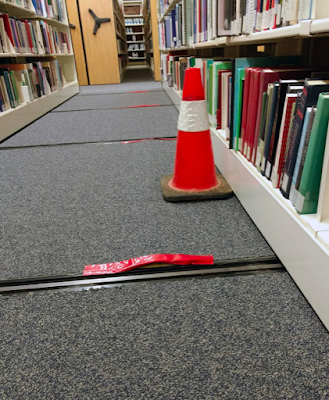 This hazard control strategy is likely not compliant with s. 9 of the OHS Code which requires employers to eliminate the hazard (rather than just slap a quick fix on). Not surprisingly, duct tape was not an effective fix and has since lifted.

Staff again raised the issue in November of 2018 but there was no further action. Fast forward t this year when a staff member almost tripped. This reflects that, when going into the stacks to retrieve a book, one’s eyes are on the books, not the floor. Another complaint was lodged. Facilities was notified but, other than the (bizarre) placement of an orange traffic cone (???), no further remediation has occurred. 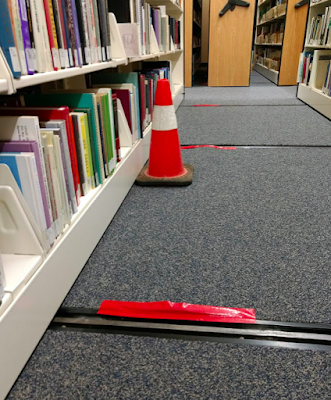 This lame response to a well known and identified hazard is contrary to AU’s obligations under the OHS Act. How this hazard hasn't been identified in the required quarterly walk-around inspections of the worksite by the Joint OHS Committee is unclear. The likely answer is that the inspections aren't happening as required by s.197 of the OHS Code.

The OHS Act requires workers report hazards (done!) and then:

3(1) Every employer shall ensure, as far as it is reasonably practicable for the employer to do so,

Pretty clearly, AU has (once again) failed to meet its obligations under the OHS Act. So what are workers to do?

Well, they could complain again. Since multiple complaints have yielded no meaningful action, that is probably useless. This dynamic (complaints being ineffective resulting in fewer complaints) is actually a well established phenomenon in the study of employment rights. It reflects that workers aren’t stupid and can accurately calculate whether filing complaints are worth their time.

The staff could also refuse unsafe work, as is their right under the Act. Workers are often fearful that exercising their OHS rights will result in (illegal) retaliation. A 2016 study of 2000 Alberta workers found that, of the workers who faced unsafe work, only one third refused the unsafe work.

When non-refusers were ask why the didn’t refuse:

When refusers were asked about their experiences of refusing, only 23.8% said the employer made the work safer. Again we see the rational calculation by workers: refusals entail significant risk and have a low prospect of success.

Not surprisingly, AU workers have not (yet) refused this unsafe work. An organized, group refusal would probably be the most effective approach here. If the group held firm, work would stop and an OHS officer would need o attend the worksite.

A less risky option would be for an employee to anonymously phone (1-866-415-8690) the government’s OHS inspectors or fill out an online complaint and report the noncompliance with the Act. This will generate a site visit (eventually), a compliance order and, several months from now, maybe even a remedy. A work refusal would likely get faster results.

I would guess the most likely outcome will be that workers will take no action, try to be careful and avoid the hazard, and, eventually, someone will get hurt. This reflects that there is very littletrust in senior administration at AU, particularly around health and safety issues (and for good reason).

The odds that AU will take action to remedy the hazard (e.g., call a carpet installer to fucking fix the problem or replace the flooring) is pretty slim. That’s a pretty sad state of affairs, but there you go.

Hey Bob, did you see the new carpet they installed in the stacks in the last couple of weeks - problem solved!