Is a general strike in the offing for Alberta? 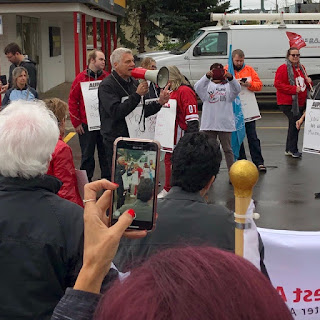 I attended an information picket hosted by the Alberta Union of Provincial Employees (AUPE) last Tuesday. This picket was one of many AUPE is hosting to voice its members’ opposition to Bill 9, which the government passed in order to break collective agreements and stall wage arbitrations for public-sector workers.

AUPE (and other unions) have been organizing pickets all summer. These pickets are designed to channel and publicize public-sector workers’ anger. They also normalize picketing and are useful in identifying and training a new cadre of union activists going into what will likely be a difficult period for unions (legislated wage rollbacks are expected this fall).

The tone on this picket line was notably chippier than the one I attended in July. There were lots of cars honking in support. The only negative feedback I saw was from one (of course) pickup driver. I didn’t catch what he shouted but the shouted response from several female healthcare workers was “I hope you never need anyone to wipe your ass in hospital!”

There were the usual rah-rah speeches. A notable departure from the usual talking points was made by AUPE President Guy Smith who said (and this is a slight paraphrase) these pickets are practice for a general strike because, if the government won't respect our rights and the courts won’t force them to, a general strike is our only option. As an aside, general strikes were the subject of a very interesting analysis by Organizing Work a few weeks back.

Union leaders have studiously avoided talking about an illegal strike in public until now. The Court of Appeal overturning the injunction against Bill 9 and the MacKinnon panel musing about legislated bargaining mandates, back-to-work legislation and the notwithstanding clause may have contributed to this change in tone. Essentially, if the government is set on denying workers any meaningful legal recourse when the government violates the Charter and breaks collective agreements, the only option (as Smith suggested) is to take to the streets.

An interesting question is whether this speech was a calculated warning shot designed to sober up the government, a emotionally driven response to a tough couple of weeks for the labour movement, or an honest communication to workers about where things are heading? I’m inclined to think there is a bit of all three explanations at work.

If you’ve ever crossed swords with him, you’ll know that Smith is passionate and can engage in some… errr… rhetorical excess when he gets pissed off. That’s not to say he isn’t savvy and calculating (he definitely is both those things). Indeed, he may be leveraging the apparent ineffectiveness of legal options as a way to pressure other labour leaders into taking a more aggressive stance than they might otherwise be inclined to.

His comments may also have beeb an effort to warn the government of the consequences of their intended course of action. Jason Kenney’s spat with Amnesty International (of all groups) this week suggests that this kind of warning is likely just going to amp up a government that is already demonstrably intemperate and thin-skinned. I presume Smith knows that. Perhaps Smith is making lemon-aide: there’s gonna be a fight, so its best to goad Kenney into (further) overplaying his hand because a boss who’s being a complete asshole is a great asset to unions.

And telling workers there’s going to be a fight (especially a sympathetic crowd like people who picket after work) is a good way to start inoculating workers against the fear and smear campaign the government will likely run in conjunction with any legislation. It’s also the honest and right thing to do.