This summer, I took a cemetery walking tour with my wife (after 20 years, finding new things to do for date night is a challenge!). This year we toured the Mount Pleasant cemetery I south Edmonton and we ran across this monument to workers killed in a mining incident in 1907. 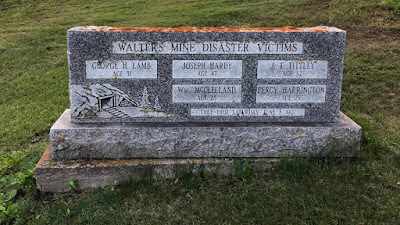 Mining deaths were common at the turn of the last century. The 1910 Coal Creek and 1914 Hillcrest Mining disasters jump to mind. There is a nice song about the Hillcrest Disaster:

While Edmonton’s river valley is presently mostly known as a recreational space, 100 years ago, it was an industrial hub, hosting small coal mines (200 by one count), lumber mills, and brick yards. The present Mill Creek Ravine walking path is actually an old rail bed used to bring products up from the valley to the main line.

I hadn’t heard about this mining incident, which apparently occurred on the south side of the river, near the present-day High Level Bridge. After some googling, I found an interesting piece by the EdmontonJournal about it.

An interesting aspect of the article (which mostly focuses on the human tragedy angle) is this discussion of root cause:

A fatality inquiry found the men had died of smoke and gases released by the fire. The cause of the fire was unknown but it was suspected to have started in the engine house, where a light that was always on ignited oil rags.

The inquiry’s jury censured the Strathcona Coal Company for not sinking another air shaft in the mine as required by the province.

They also censured the provincial inspector for not insisting the other shaft be built.

The jury recommended that the government require all mines that employ men underground to hire an outside watchman and expressed regret that the City of Strathcona had not responded to an earlier request from the fire chief for a hose wagon and necessary equipment.

So we have both a proximate cause (oily rags ignite) and root causes (company stored rags near ignition source, company did not monitor for fire at night or sink an extra air shaft, government looked the other way). It’s sad that this broad pattern of events remains a common one in occupational injury today.