A recurring issue at Athabasca University is the slow loss of university jobs from the town, mainly to the Edmonton area. While there was some recognition that this was a problem by former New Democrat government, the government took no action to resolve it and the entire senior leadership of the university decamped to Edmonton, St. Albert, and Calgary.

Recognizing that job loss at the town’s largest employer was potentially politically problematic, the university struck a committee (that included residents of the town) to discuss the issue and held an open-house in June. The open house infographic claims a 71% increase in Athabasca-based staff between 1985 and 2019. While probably true, using two data points 34 years apart disingenuously obscures the rise and fall of employees in intervening years. The university was also invited to join Athabasca County’s Tourism/Economic Development Committee.

There has been little concrete progress on this issue for several years beyond some sporadic language in job postings about giving preference to candidates who will live in Athabasca. In mid-September, a group of prominent Athabasca residents (mostly Conservative business people and politicians) arranged a meeting with the new Minister of Advanced Education to discuss this issue (and, specifically, the departure of senior university leaders). While this meeting was postponed (possibly at the request of the university), it suggests this issue is not going away.

This week, Athabasca-based AU employees received an invitation from the university to complete a survey designed “to help develop strategies to drive discussions on building a sustainable local community.” The survey appears intended to feed into the work of the Athabasca County’s Tourism/Economic Development Committee (although this is unclear). The survey itself is, to say the least, bizarre and appears to be hosted by 13ways.ca, a consulting company run by former Conservative MLA Doug Griffiths.

The survey asks a variety of yes/no questions about respondents’ perceptions of the community’s trajectory, drinking water (?), local spending, municipal flower plantings, various questions about strategies and partnerships (that respondents almost certainly can’t answer), seniors housing, and in-migration. A “bonus question” asks respondents to choose a community slogan from a list of negative options (at the bottom you can select none of the above). I have reprised the list of slogans below—it is quite shocking. 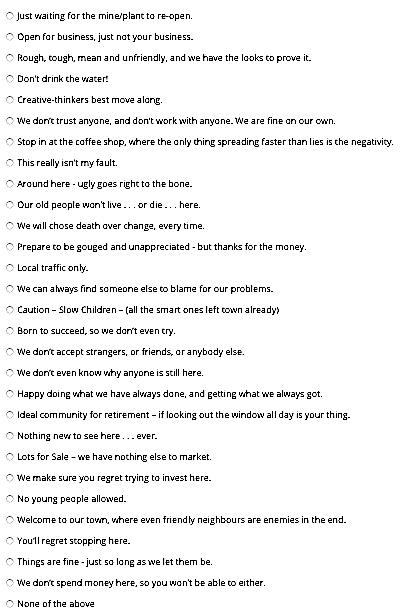 Presumably, this survey and the bonus question (which appears based on Griffiths’ book “13 ways to kill your community”) is designed to identify problem areas that Griffith’s consulting firm would be poised to help remedy. Whether this survey is valid or reliable (even in the most casual sense of the word) is a very, very open question (if this was student project, I’d give it a D).

Why the university would be sending this out to their employees to fill out is a good question. The survey suggests that there is something wrong with the Athabasca community that must be remedied (which is not true). This framing allows the university to shrug, say “no one wants to live there”, and absolve itself from any responsibility for the loss of jobs in Athabasca.

In fact, what has happened is that the university has been voluntarily transferring jobs out of the community for years. This job loss could be stopped literally overnight if the university simply started hiring more positions to Athabasca. There is no impediment to this: there is space and there are candidates who will move there.

That the university won’t do that and, instead, sends out silly info graphics and surveys, tells Athabasca community members pretty much all they need to know about Athabasca University’s actual commitment to the community. It would be pretty funny if all of AU’s ducking and weaving on this issue resulted in the government directing all senior executives to live and work in town.

I can only hope that the "bonus question" was meant to be funny? I mean, I'm one of those people who thinks that limiting staff hires to Athabasca isn't good for the University over the long term, but this is just insulting.

Totally a guess: the bonus question is designed to suss out negative impressions of town by respondents and thereby act as a diagnostic tool. Probably doesn't work because the only non-negative response is "none of the above" and yes, it is insulting.

This is mind blogging. The height of unprofessionalism

Griffith's book is popular in rural Alberta, and some of the attitudes and issues (like poor water quality or sharp divides in community views) are real, but not so in Athabasca.

Sadly the survey is poorly designed and this is unfortunate, as social scientists on staff could have helped develop better questions and scales.

In 1987, when I started as a 30 something Assistant Professor and moved here with my family, there were 35 or more professors residing in the community, a bit more than half the faculty. Others commuted to work mostly from Edmonton area to the campus. One professor had his official office located in Edmonton, and one professional, and two support staff ran our programs out of the Whyte Avenue office. There were similar micro offices in Ft Mac and Calgary.

Almost all professionals resided in greater Athabasca, as did most all support staff. Tutors were then, as now, dispersed.

Today 5 faculty reside here. Less than 5 percent of the faculty. Most of us are late career. The many other faculty (now some 180 or so) live in Edmonton and Calgary, other cities across Canada and even abroad. A few live in rural regions. As Bob and AUFA have noted more and more professional jobs are now recruited to the cities. Likewise the Executive (which has also grown) and many Directors have also all decanted to the cities.

The original location of AU in Athabasca was part of a larger effort by Premier Lougheed to share urban wealth with rural areas. The cynics saw it as a vote gambit. Others interested in regional development issues saw the social democratic potential.

Today that dream of rural equity and diversity is in tatters. The story reminds me in part of the Cerro Rico in Potosi, Bolivia, a mountain of silver which over centuries physically collapsed in on itself as the Spanish crown shipped its wealth back to Spain.

Like Cerro Rico, so many upper level and faculty university positions have been extracted from rural Athabasca and shipped off to the urbanized world, taking the progressive social and civic skills of those workers and their families and networks with them. These losses have had a greater impact on community life than the economic multipliers.

Today, the campus feels like a government office. The Athabasca community and the university are in danger of, if not collapse, becoming a simple tin mine, much like that mountain in modern Potosi.

Hi Bob, I am curious, do you have the stem for that bonus question? What was the actual question/preamble?
So odd.....

Yes: "If you were to pick a slogan that most accurately suits your community today, which would you choose?" Sorry--didn't realize I had cropped off the screen shot when I went to enlarge it.

Renee Sibera Photography said...
This comment has been removed by the author.
October 8, 2019 at 7:39 PM

I think the key thing to not fall for is that somehow it is Athabasca that is the problem and not decisions by AU.

The government can also help them do that. There are a lot of things Athabasca needs but it is a far more attractive community, has more water, and very good facilities for a community of its size.

The reason people leave here is jobs, and jobs is what AU and the Alberta Government could provide.

Don't let their communications people change the channel on us and make us think this is Athabasca's fault. It isn't.