Presentation: OHS convictions and fines in Sk and AB

Last Friday, the Alberta Workers’ Health Centre hosted a presentation by Sean Tucker (University of Regina). Tucker is in the process of examining OHS prosecutions, convictions and penalties in Alberta and Saskatchewan. Sean graciously consented to allow me to present some of his slides. This is still a work in progress, so the data and the conclusions should be considered tentative. 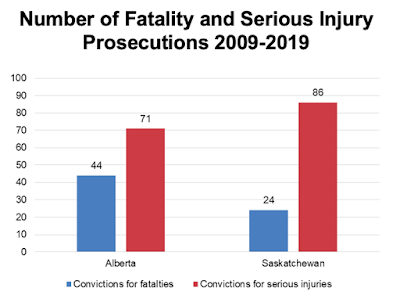 The median (midpoint, not average) fine associated with prosecutions of organizations is much higher in Alberta than in Saskatchewan. The same pattern holds true for prosecutions of individuals but the fines are much lower. 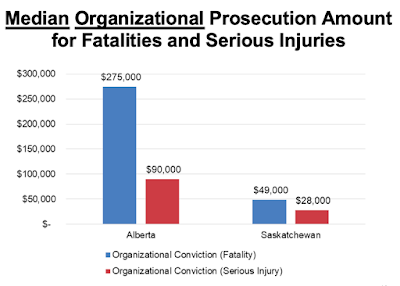 A compelling presentation of the data compares the average (and highest) files for OHS fatalities and serious injuries with the maximum potential fine. (One addendum to this slide: the maximum fine for a first conviction in Alberta is $500k; the $1m ceiling is for second and subsequent convictions). 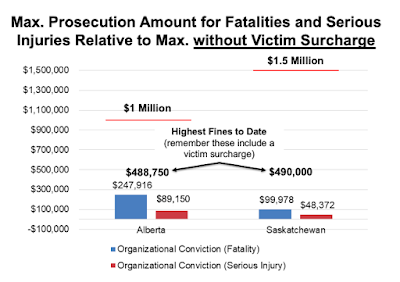 What the slide above shows is that, despite general deterrence being a key purpose of fines, neither Alberta nor Saskatchewan has had much luck securing anywhere near the maximum penalty. There are a number of reasons for this (including sentencing considerations).

One of Tucker’s questions was whether increasing the maximum Saskatchewan penalty from $300k to $1.5m would result in higher fines. The answer, after 5 years, is no for fatalities but perhaps yes for serious injuries (although both fines remains well below the maximum). This analysis provides some support for criticisms that potential fines are often far higher than actual fines. 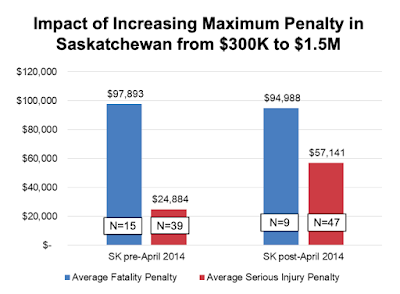 The post-presentation discussion (which continued during a small lunch gathering) was quite interesting. A key question was whether jailing employers who kill workers might serve as a greater safety incentive than increasing fine levels.