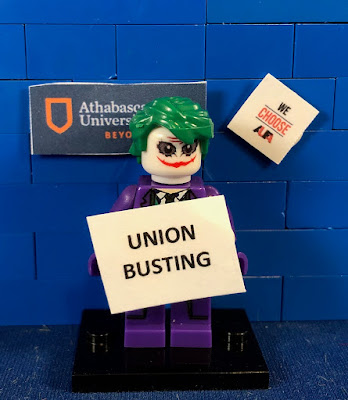 A recurring question about Athabasca University’s proposal to de-designate 67% of the AUFA membership is why AU is doing this. One explanation is that de-designation may be part of a broader union-busting strategy on the part of AU.

Union busting occurs when an employer tries to undermine a union’s actual or perceived effectiveness. Typical union-busting tactics include:
These strategies are intended to make the union less effective at representing members. The hope is that, over time, union members start to lose confidence in the union because the union struggles to get members what they are due under the contract.

Employers’ long-term goal is to cause workers to become non-unionized. These tactics are generally motivated by the employer’s desire to reduce compensation costs and increase management power.
Union Busting at AU to Date

Over the past three years, a clear pattern of union-busting behaviour has emerged at AU:

These behaviours appear designed to reduce AUFA’s ability to represent its members and, thereby, reduce members’ confidence in AUFA. Taken together and using a balance of probabilities test, the pattern strongly suggests that AU is engaged in a union-busting strategy.
What’s is Next?

While it isn’t possible to know exactly what AU’s next moves will be, here are some things to watch for:

While these expected next moves are disheartening, we are, as a union, able to fight back effectively.
Fighting Back

One of the ironies of AU’s increasingly aggressive approach to labour relations under the watch of President Fassina is growing solidarity between members and a significant loss of trust in Fassina. This growing solidarity is a powerful tool that we can use to oppose AU’s union-busting.

During last year’s bargaining, members actions (such as information pickets, public meetings, workplace sign campaigns, and social media posts) gave the bargaining team the power to resist the employer’s worst proposals. A similar campaign is underway against the designation policy.

It may be necessary to further intensify member actions, depending upon how AU behaves in the coming weeks. AUFA is, of course, also preparing a legal strategy to resist de-designation if member pressure is unsuccessful in thwarting de-designation.