Students are typically taught research methods as a very formal process. Basically, the literature yields hypotheses that we then test to confirm or reject. This is a pedagogically sound approach to teaching methods, but it often obscures the kinds of research that most students will do in their jobs. In the workplace, research is often triggered by running across something curious. We then look for other information that we can use to substantiate and explain whatever it is that we found.
For example, every June 30, public-sector employers in Alberta are required to disclose the compensation of any workers who makes over a certain amount ($141,183 in 2022). The resulting administrative data can be a rich source of information, including information incidental to the actual purpose of the disclosure (which, one supposes, is transparency).

So, how might we explain that (i.e., what are the possible hypotheses)? There are a couple of potential explanations. The most likely explanation is simple error. Regulatory disclosures require manipulating a lot of data and, from hard experience, I know it is pretty easy to lose a row of data.

Some other potential explanations include:
Looking at these explanations, the last one is the most likely. So, can we find other data that supports this explanation? Surprisingly, yes. A quick google search turns up this in incorporation document from Ohio. 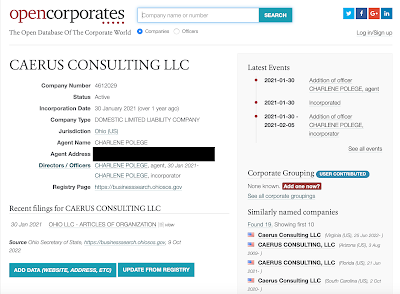 Basically, someone with the same (and rather unique) name as the HR Director incorporated a company in early 2021. Additional googling (that I won't share) suggests this person moved to Ohio in the autumn of 2020 and is about the same age as the current Director. The firm that initially filed these documents is a firm that deals with cross border (i.e., US and Canadian) tax files.

Although these facts don't conclusively prove anything, they do create some compelling circumstantial support for the premise that the Director’s disappearance from the salary disclosure is the result of a change in status. This explanation also has an internal consistency to it: converting a senior employee to a contractor would be a highly unusual step. Such a conversion might make sense, though, if the person was working from another country.

If we wanted to further substantiate this potential explanation through triangulation, we could either look for an administrative record that the university has some kind of contractual relationship with Caerus Consulting LLC or tap into our social network to find out if anyone knows if the Director relocated to Ohio.

This sort of research is relevant because it may help us understand, in part, the resistance by members of the university executive to the demand by the Government of Alberta that executive members live in the community of Athabasca. (My understanding is that some other executive members also live out of province).

This sort of real-world research is pretty common for HR and LR practitioners and uses many of the same skills and techniques as the more formal approach to research that is taught in such courses as SOSC 366: Research Methods in the Social Sciences. But the application and the conclusions tend to be a bit looser and less exacting.