Blue-collar work and the Kenney government 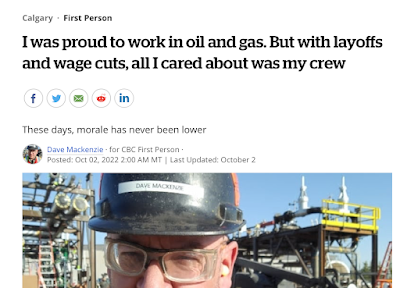 CBC recently ran a very interesting first-person account from a Calgary welder about his experiences in the oil-and-gas sector. You can read the piece here. The nub of the account is that working conditions for welders in the sector are poor and are driving workers away. It is an interesting and well-written piece.

I flag it for a couple of reasons. One of the more tedious talking points of the Kenney government is that there is some kind of esteem gap between white-collar and blue-collar occupations. The gist of the narrative is that people (e.g., students, parents, teachers, and workers) think they are too good to do a blue-collar job (so basically it is a worker-blaming narrative, not all that different than equally ridiculous assertion that people no longer want to work).

Like most things Jason Kenney said as premier, there isn’t really any evidence that this esteem gap exists. (The two people I have been happiest to see in my life are an ER doc and a plumber, and not necessarily in that order.) Rather, this putative esteem-gap is just a dog-whistle pretext designed to justify increasing investment in skilled trades training and reduced investment in university education. Why would Kenney do that?

Well, Kenney’s actions as a federal minister suggest he often assists employers to minimize labour costs buy flooding the labour market with workers (think back to the temporary foreign worker deluge of 2008-12). Increasing the number of skilled trades people allows employers to suppress demands for better wages and working conditions because there is always a surplus of workers.

The first-person account of working in a welding shop in the oil-and-gas industry unintentionally highlights a number of structural reasons that workers may be reluctant to engage in blue-collar work (that have nothing to do with people thinking they are too good for that work):
In the end, the author acknowledges that working in the industry used to provide a stable living but no longer does. Not surprisingly, he leaves the industry to teach high-school kids welding skills and all but two members of his original crew either quit or were laid off.

So, what can we learn from this:
Even a modest amount of critical thinking raises some pretty profound questions about these narratives. Why, for example, might workers not be keen to take certain jobs? Is it because they are innately lazy or think too highly of themselves or are misinformed? Or is it because the jobs are organized in ways that make them, relatively speaking, difficult, unstable, and poorly paid, and thus workers don’t see them as a good choice? Are there impediments (such a childcare availability and shift work) that make it impossible or uneconomical for workers to take these jobs?

This kind of questioning is typically taught in the liberal arts, which is the exact kind of education that the Kenney government has aggressively defunded. That is probably not a coincidence.