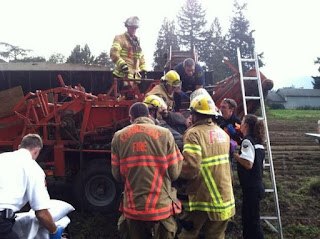 Over the summer, there were encouraging signs that Alberta’s New Democratic government was going to provide Alberta farm workers with basic workplace rights, such as the right to refuse unsafe work. The details remain sketchy (the NDs inherited a pretty full plate of problems!) but one report suggests farms will become subject to the occupational health and safety regime effective in 2017.

The farm lobby has long resisted being subject to OHS rules, arguing that farms are somehow special because most (at least 96% in 2011) are owned by families. The relevance of ownership is hard to see. The family farm argument mostly looks like a red herring designed to evoke a ma-and-pa-on-the-prairie (who couldn’t possible comply with complicated regulations) image of Alberta agriculturalists.

Let’s look at some facts about farm employment (drawn from Alberta tallies in the 2011 agricultural census), shall we?

In 2011, Alberta farms of 1120 acres or more employed 52.9% of all paid workers and were responsible for nearly 60% of all weeks of paid farm work even though they comprise only 26.4% of all farms. Farms of at least 2880 acres comprised only 8.9% of all farms in Alberta yet they employed 28.9% of paid workers and were responsible for 37.6% of weeks of paid work.

Farms that are two sections (1280 acres) or more in size are hardly traditional ma-and-pa-homesteading-a-quarter-section-with-a-horse-and-a-plow operations. Rather they are highly capitalized operations that comply with all manner of other regulations. Looking at the finances of these so-called family farms also suggests that those hiring help can afford to comply with workplace regulation.

This seems to put to rest any notion that so-called family farms somehow can’t afford to comply with regulations. Those farms that employ the majority of Alberta farm workers are financially large operations. If their profit margins are so small that they can’t afford to adequately protect their workers, then those operations are not financial viable and should close. We shouldn’t subsidize these operations by allowing them to operate unsafely.

This morning I awoke to see that Alberta’s Wheat Commission (basically a farm lobby group for grain farmers) is advancing the argument that farmers know what will work on their farms around health and safety and that training and education is the way to go.


“As is the case with every safety measure, we believe that education and training are the most critical aspects of developing a program that will work,” said Alberta Pulse Growers Commission chair Allison Ammeter. “Farmers are the subject matter experts on what will be most effective for their farm, and we look forward to sharing that expertise with the Government of Alberta.”

This is, rather obviously, self-serving bullshit.

If farmers knew how to prevent injuries and were motivated to do so, then agriculture would not be one of the three most dangerous occupations in Canada.

And, if education and training prevented injuries (an assertion the Progressive Conservative government pushed for years in an effort to avoid regulating farms), then farm injuries would have gone down given we’ve been doing farm safety for decades.

The ineffectiveness of farm safety efforts Alberta is hard to see because the government failed to track this data (how convenient!). But we can look to research in Saskatchewan for evidence that education has no meaningful effect on farm injury rates.

Installing roll bars on tractors, for example, is expensive and farmers likely prefer not to spend the money. We don’t accept this attitude from any other group of employers and we shouldn’t accept it from farmers (no matter how much we may like them and value their work).

The bottom line is that all employees deserve the same workplace protections. And the government should step up and ensure farm workers have these rights now, not some watered-down version of these rights in frigging 2017.

Is there any data to support whether the majority of worker injuries come from the large corporate farms?

No. The Tory exclusion of farmworkers from mandatory WCB means there is no representative data on what injuries occurred on which kinds of farms. The farm stats that they did collect are too incomplete (weighted towards fatalities, too few in number, no good data on employer characteristics) to draw a conclusion. I don't want to give the Tories too much credit, but (as we're seeing with the StatCan long form census) data denial is a strategy of the right to undermine resistance.