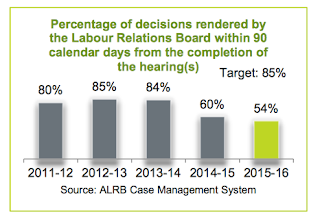 I took a look through Alberta Labour’s 2015/16 annual report last week. Subjectively, this year’s report had much more content than past years. I imagine this reflects the change in government and greater openness around labour matters. There are a couple of things that stand out.

Employment Standards
The number of claims received in 2015/16 jumped to 5400 (from 4700 the year before). About 73% of claims are settled voluntarily (i.e., the employer paid enough to satisfy the employee).

There is a note flagging a sharp rise in claims in late 2015/16 due to an economic downturn. The likely dynamic here is that people don’t file ES claims (for fear of employer retaliation) until after they get sacked so a downturn (i.e., layoffs) means more employees have nothing to lose by trying to recover stolen wages.

That half of claims run longer than six months may be worrying because of the moving window during which wages can be recovered (basically, if your claim takes too long to resolve, you might not get anything). That said, this number may also reflect that the government counts claims settled and sent to collections as unresolved.

Occupational Health and Safety
Alberta concluded 11 prosecutions for OHS offenses in 2015.16 with fines from $3000-$300,000 ($1.5m total). No comparator data for prosecutions was provided. If you look here, you will see there has been a pretty steady decline in prosecutions and fines over time.

The overall number of inspections dropped slightly from 9600 inspections to 9500 in 2015/16. How many were part of inspection blitzes or were re-inspections (to determine compliance with an order) is hard to tell. I’d guess maybe 5000 (of ~160,000) businesses were inspected last year (happy to be corrected if someone has data).

The number of orders written also declined from 10,000 to 9000. What is interesting is simply the high number of orders, which suggests significant noncompliance with the OHS Code. The report did not disclose the number of OHS inspectors currently employed in Alberta

Enforcement blitzes are one tool the government uses to target industries with high level of injury. The government just finished a three-year blitz of the sand and gravel industry triggered by 16 fatalities in the industry between 2011 and 2014.

Overall, the modest results of a three-year blitz should raise questions about the effectiveness of the blitz tactic. Blitzes are likely better than nothing. But the temporary nature of the enforcement and compliance focus (versus punishing transgressors) may undermine its utility.

Interestingly, 93% of Alberta workers feel that Alberta workplaces are safe. The measure here gave me paused: respondent choices were “very safe”, “safe”, “not very/at all safe” or “not sure”. So basically you have two positive choices and one negative. I would guess that skews the numbers to look more positive than a Likert scale set of responses might.

Labour Relations
The number of certification applications in Alberta fell by 24% in 2015/16 to an even 100 applications. It is hard to tell the overall trajectory of organizing activity from the data presented.

The average time to getting matters to hearing is 62 days. While this is below the target of 70 days, that it takes two months to get a hearing feeds into the claim by many trade unionists that the Labour Board does not offer an effective avenue for exercising workers’ rights.

Labour Board decisions are also coming slower, with only 54% being issued within 90 days of a hearing concluding (target is 85%). There was an illness in 2015/16 that affected these numbers, but the five-year trend is downward and contributes to the “just delayed is justice denied” sense about the Labour Board.

There is some effort to blame this on an increase in duty of fair representation complaints (which jumped from 60 to 87). I think that is hokum: most DFRs get punted at the administrative review stage for lack of a prima facie case and because the standard for meeting the DFR is so low. The extra 17 complaints amount to two or three afternoons of adjudication work.