UManitoba strike a glimpse of things to come in Alberta 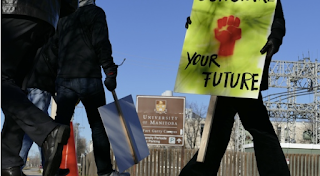 There are several issues that drove Manitoba profs to declare bargaining was at an impasse and walk off the job. They include salary, workload escalation, protections against performance indicators, and job security for new instructors and librarians. The government of Manitoba did not help matters when it issued an edict of no wage increases just as bargaining was reaching a sticking point.

So far, the strike appears to be stable and the University of Manitoba is coming under pressure form its students (who are concerned about the erosion of their education). Tuesday, the university urged faculty members to accept its most recent offer and return to work until March in order to not negatively affect students.

“Oh think of the children” has a nice rhetorical ring (and obscures that concerns about eroding educational quality are at the heart of the strike). But the university cannot possibly be so naïve as to think faculty would throw away their leverage (which increases with each lost instructional day) in order to sign a lousy deal and be right back where they were in March—when job action will have little effect on the university which will be winding down for the summer.

The university is also seeking to undermine the authority of the union elected executive with a call to have the union present a clearly unacceptable offer to its membership. The university’s hope is to drive a wedge in the union membership and maybe induce some faculty to cross the picket line. Negotiations resumed Wednesday afternoon.

It will be very interesting to see how university administrators and faculty—who have no real experience with strike-lockout—comport themselves during the first few strikes in work stoppages in Alberta.