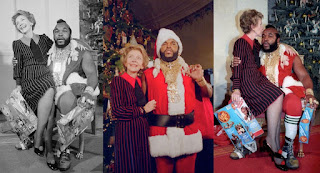 With the Christmas break upon us, this week’s installment of Labour & Pop Culture looks beyond music to television. I’m awaiting publication of an article (coauthored with Mark McCutcheon) about the absence of images of labour in science fiction. When that finally drops, I will feature some of the few sci-fi texts we found.

In the meantime, I’ve been keeping an eye out for other television shows where unions and labour issues come up. With in-laws to avoid, this situation cries out for… the A-Team. Because, if you have a problem, if no one else can help, and if you can find them....maybe you can hire The A-Team.

The A-Team was a terrible 1980s drama about a group of do-gooder Vietnam vets driven underground because of something-or-other I forgot after I discovered girls. Season Two featured an episode called Labor Pains. I have embedded the key scene below but you can watch the whole, tedious episode here.

The show is a good example of the “a stranger comes to town” trope, albeit in a 1982 custom GMC van driving helluva fast and crashing through a billboard and then jumping a washed out bridge. The boys then have a fight with some goons who work for some agri-stooge kingpin who are pushing around some migrant farm workers. (You can now skip the first 14 minutes of the episode). Eventually, the A-Team convinces the workers to continue a work stoppage and form a union.

“You’ll have a union in this valley over my dead body!” cries the boss and then tries to starve the workers out because the crop is rotting in the field. Organizing ensures (the scene at 28.00 is pretty funny—if only every union drive had Mr. T on board, suckas). Mayhem ensures (although this was shot in the 1980s so it takes for-frigging-ever to get to the action), including a cabbage cannon. The workers triumph and the A-Team scoots before the military police show up.

Not a super realistic portrayal of an organizing drive, but an oddly sympathetic one (usually television episodes focus on the disruptive nature of strikes and union corruption). Of course, the A-Team are mercenaries and, in Season Three, they help a small-time logging operation battle a (you guessed it) corrupt union intent on shutting them down.