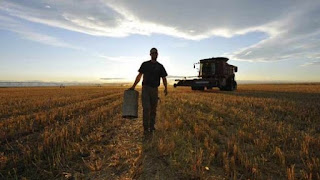 A few interesting things went down last week in Alberta labour issues. The government announced the results of the first full year of mandatory WCB coverage for paid farm workers. The short version is that the number of operations covered jumped from 1756 in 2015 (when coverage was optional) to 3629 in 2016. There was no estimate of what percentage of operations have taken out the mandatory coverage.

Looking at the these numbers, it is important to be mindful that (1) these injuries represent only the most serious injuries (where there was wage loss or medical aid beyond first aid required)—most injuries do not have to be reported to the WCB—and (2) even among injuries that should be reported, there are going to be unreported injuries (40% non-reporting is the best estimate I have seen).

Add in farms that haven’t taken out WCB coverage and we can be confident that the true level of injury to paid farm workers is appreciably higher than these numbers indicate. Looking at the type of injury, the Calgary Herald reports:


Nearly a quarter of the claims, 199, were strains or sprains, with 153 superficial wounds, 165 open wounds and 106 cases of fractures, dislocation or nerve damage. There were 170 other injury claims, as well as three accepted farm fatality claims.

The most notable response was from the Wildrose that seemed to walk back promises to repeal Bill 6 by saying the Wildrose would provide replacement legislation, perhaps allowing farmers to choose between WCB or some sort of private alternative.

Staying with agriculture, the Parkland Institute posted a piece I wrote about proposed exemptions around hours of work and child labour for farms. The most interesting reaction to this was that report that triggered the blog post disappeared from the employer lobby group website it had been posted on!

Finally, APEGA levied a $10,000 fine and a $150,000 contribution on Canadian Natural Resources Ltd as a result of engineering problems that lead to the deaths of two foreign workers in 2007. This fine is trivia (CNRL's revenue in 2015 was $13 billion) and likely is less than the cost of proper engineering work would have been.

This announcement likely concludes the various investigations into this incident where an unqualified employee did the engineering work on tanks that fell apart while being assembled due to high winds. This incident also revealed that one of the other companies involved in this project was stealing the wages of the foreign workers that had been brought in to do the work. Good work, "job creators"... .