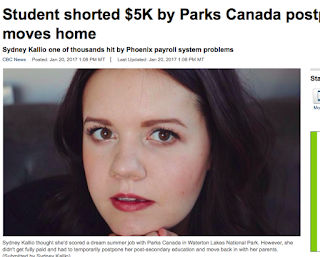 In February 2016, the federal government rolled out the Phoenix Payroll system for a significant portion of the federal public service (about a third of its ~300,000 workers). This roll out has been plagued with problems.

Workers are not getting paid. Or are getting under paid. Or over paid. Or being asked to return more in over payments than they were paid in total. One person has lost their home, others have missed mortgage, and loan payments.

The exact scope of the problem is hard to tell. One report last summer suggested 82,000 errors had been reported between February and July of 2016. At present, it appears there remains a backlog of 8000 cases from that period and another 13,000 high priority cases have emerged since then. There are also an undisclosed number of lower priority cases. Basically this is a disastrous roll out that has overwhelmed the ability of the federal government’s payroll office to resolve in a timely manner.

Last week, the case of an Alberta summer student hit the news. The student worked in Waterton Parks last summer. She’s owed $5-6k (one of >1500 summer student cases), had to move back in with her parents and postpone her studies. The government’s problem resolution system clearly doesn’t work:

She says trying to get answers about her paycheques during the summer was hard. She recalls dialing the phone number she was given up to 30 times a day and not having anyone pick up.

"Since then, I have called probably about three times a month and still they have no answers for me. They don't have my personal files … they just pass my information along."

So she went to the media with her problems, alleging “…Parks Canada staff told her not to speak to the media because she might not be hired back next summer…”. Whether this statement was intended as helpful advice to a young worker (it is likely correct) or a threat, clearly the student decided to ignore it. After all, why would she want to work for an employer that can’t or won’t honor its most basic obligation: to pay for work done?

One of the issues this cases raises is the way that the “work now, grieve later” principle that underlies modern labour relations leaves workers essentially powerless. While the union representing many federal workers (PSAC) has pursued a number of strategies (legal, media) to resolve the problem, its members’ most effective tool for pressuring the government to resolve problems (a work stoppage) is rendered illegal.

Now a work stoppage won’t magically resolve the pay problems. But it would likely motivate the employer to (1) make more of an effort to resolve the issue, and (2) to hold senior decision makers to account for this disaster. By contrast, playing nicely has led to members asking why they have a union if it can’t get action on such a basic violation of the workers’ employment contract.

In this dynamic, we see the incorporation thesis at work: unions and labour laws play a key role in managing worker discontent by channeling workers’ collective efforts in non-disruptive (and, in the short term, completely ineffective) dispute resolution mechanisms. This is good news for employers (work continues uninterrupted) but bad news for workers.

Sounds terrible. Isn't there SOMEONE in charge that can be contacted so that the problem will be resolved? Can't PSAC assign a full time person to work on the issue?

I think the problem for the federal government is that there are lots of files (so volume is an issue). I also wonder if the move to centralize the service in Miramichi, NB caused significant attrition among compensation advisors (who didn’t want to move there), meaning there was also a significant loss in organizational capacity to understand pay and fix problems.