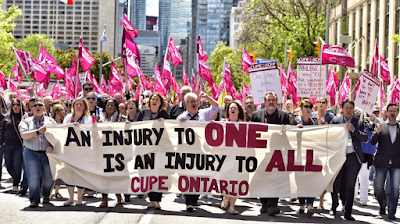 Continuing our look at Bill 30 (An Act to Protect the Health and Well-being of Working Albertans), there are a lot of changes to workers’ compensation. Today I wanted to examine some of the changes it makes to financial benefits for claimants.

Presently, workers who are totally disabled (permanently or temporarily) are eligible to receive wage-loss benefits totalling 90% of their net earnings. The definition of earnings includes an insurable earnings cap or $98,700. This means that the WCB will replace $9 of every $10 of lost wages up to $98,700. Any lost wages over $98,700 are not compensated.

Bill 30 retains the 90% wage-loss replacement rate but eliminates the cap. This will be a boon to high-wage earners who have been doubly financially penalized by the cap (getting only 90% of wages and not getting any benefits for income over $98.7k).

It would have been more beneficial for the WCB to provide 100% replacement and keep the cap as this would have better helped lower-wage Albertans (who comprise the majority of injured workers). Helping out the richest injured workers seems like a strange choice for a government that styles itself as socially progressive to make.

Or they could have also done both (100% and no cap) and actually financially compensate all workers for the effect of their injuries… .That said, there were also some adjustments targeting lower-income injured workers.

Workers under 25 who experience a long-term and significant injury (≥50%) can have their income adjusted to the Albertan average. This addresses the situation wherein young workers (who often earn low wages) get stuck with life-time compensation set at absurdly low levels.

Bill 30 also adds a mandatory death benefit of $90.7k in the case of fatalities, levels-out the treatment of widows, and extends benefits to dependent children not living at home to age 25 if enrolled in an educational program. Bill 30 also improves retirement benefits for injured workers, recognizing the effect injury has on their ability to save for retirement.

Perhaps more importantly, the indexing of WCB benefits will track the consumer-price index (CPI). Presently, benefits are indexed at CPI - 0.5%. Under the previous policy, the worse you are injured, the worse the erosion of your benefits is, which is an unconscionable violation of the basic purpose of workers’ compensation. This practice is a legacy of the Tory government and allows benefits to erode over time in terms of purchasing power to the benefit of employers (whose claims costs go down).

Which brings us to an issue angering injured worker advocates: retroactivity.

As far as I can tell, the changes to benefit levels only affect claims that are filed after the changes take effect (between April and September 2018), although the CPI change should affect all claimants going forward.

That is to say, workers whose claims have been adjudicated cannot file for any sort of re-adjudication under the new rules. Are you a 17-year-old who gets permanently and totally injured on McDonald’s wages today? Sorry, you’re stuck with below poverty-line compensation until you die. Did your mom die and now you are 18 and want to go university? Oh well, you’re on your own sister. I appreciate the practical and political difficulty of making changes retro-actively. A saw-off might have been to allow re-adjudication going forward (i.e., allow the new rules to apply to old claims starting on a fixed date).

It may be that the WCB itself will create a process to re-examine old claims, although I think that is a faint hope. I only mention it because the government kicked another item to the WCB to sort out.

Presently, the WCB has been returning surpluses in the accident fund to employers to the tune of hundreds of millions of dollars each year. These surpluses are created (in significant part) by investment earnings from the accident fund, which are greater than the liabilities the fund must meet over the life of the claims the WCB is currently carrying. The Review Panel recommend some ways the surplus might be used to benefit workers and employers:
Another option would be to address long-standing disputed claims and apply the benefits improvements set out in Bill 30 to existing claims. Not surprisingly, employers have been seeking continued surplus distributions.

The government essentially followed the last recommendation of the review panel. At least $94 million will be needed annually to offset the cost of additional benefits triggered by Bill 30. But that still leaves $100m (sometimes much more) up for grabs each year.

The government declined to clarify in legislation what should happen to future surpluses.  They have clarified that the purpose of money in the accident fund is intended to create a sustainable and fair system. That said, Bill 30 leaves it up to the WCB to determine how best to proceed.

It may be that the government may have some quiet (or not so quiet) suggestions about how to handle surpluses. Leaving the decision to the WCB insulates the government from any political fall out. It also raises the possibility that historically pro-employer WCB will just keep giving the surpluses to employers.

Overall, these changes to the WCB are a significant win for injured workers. Yet there is a sense of half-measures to some of them. And aggrieved injured workers remain out in the cold.