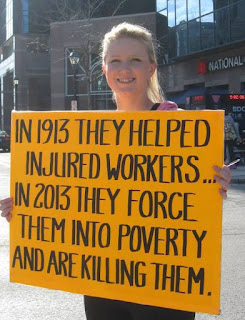 Continuing with the workers’ compensation changes in Bill 30 (An Act to Protect the Health and Well-being of Working Albertans), today I wanted to examine the effect on receiving and maintaining compensation. This is a bit of a grab bag so I have broken the post up into sections.

Occupational Diseases
It is often difficult for workers to get occupational diseases accepted by the WCB for compensation. Diseases often have long latency periods, murky causation, and workers sometimes have no idea that they were exposed to a substance that, years later, gives rise to their illness.

For this reason, diseases with clear occupational relationships are sometimes granted presumptive status. Basically, if you have the disease and you worked in the industry (sometimes for a set period of time), your disease is presumed to have arisen from and occurred during work.

Alberta’s list of diseases with presumptive status is determined by cabinet and contained in regulation. This list in regulation has not been meaningfully updated since 1982. Yes, 1982—good job there former Tory cabinet members… . (There have been some changes related to firefighter cancers and PTSD among certain first responders.).

Bill 30 includes a couple of good changes:
Overall, these are good changes that will ensure the system stays abreast of changing medical evidence. It is hard to believe that workers have had to wait this long for such a common sense change. The only downside is that the legislation appears to limit presumptive PTSD status to first responders. Other workers (e.g., social workers) will have to still make a claim for PTSD as a psychological injury.

Psychological Injuries
Unfortunately, Bill 30 does not make it easier for workers to receive compensation for psychological injuries sustained at work. At present, workers who wish to file a claim for an injury (such as chronic onset stress) must meet a much higher standard than other kinds of injury (e.g., a laceration). (Note that the test varies by type of psychological injury.)

To have a “regular” injury accepted requires only that an injury arise from and occur during work. This is a low threshold and disputes are assessed using a generous balance-of-probabilities approach. The rules around chronic onset stress claims give you a good idea of how hard psychological injuries are to get accepted (apologies for the length):

Claims for this type of injury are eligible for compensation only when all of the following criteria are met:

· there is a confirmed psychological or psychiatric diagnosis as described in the DSM,

· the work-related events are excessive or unusual in comparison to the normal pressures and tensions experienced by the average worker in a similar occupation, and

· there is objective confirmation of the events.

In addition to the duties reasonably expected by the nature of the worker’s occupation, normal pressures and tensions include, for example, interpersonal relations and conflicts, health and safety concerns, union issues, and routine labour relations actions taken by the employer, including workload and deadlines, work evaluation, performance management (discipline), transfers, changes in job duties, lay-offs, demotions, terminations, and reorganizations, to which all workers may be subject from time to time.

Ongoing compensability for chronic onset stress will be accepted when the medical evidence shows that the work or work-related injury is the predominant cause of the current symptoms. (Policy 03-01, Part 2, Application 6, Question 11).

This is basically a "get out of compensation free" card for employers; workers can almost never meet this kind of standard. In its final report, the WCB Review Panel noted about psychological injuries:

[T]he use of special criteria for certain conditions, above and beyond the base “but for” test, effectively creates two classes of injured workers, with one of those classes facing a more uphill battle that the other to access benefits. … Our Panel believes that the WCB should examine its current use of the predominant cause threshold with a view to developing a better way of ensuring that an injury or illness was more likely than not caused by work. (p.84)

This kind of work may well be better left to the WCB to sort out in policy than to address in legislation. Yet, the WCB’s culture of claims denial makes me skeptical that they can be trusted to take such action. This seems like a missed opportunity.

Deeming Wages
Presently, when workers are recovering from an injury and cannot return to their date-of-injury job, they get vocational rehabilitation services. These services vary depending on the worker but the idea is to get workers attached to the labour force and earning some kind of wage to reduce their compensation cost.

Workers who are unable to find a job within a certain time period have their wages “deemed”. Basically the WCB pretends they are earning wages (even if they are unemployed and the job they have been assessed for is not compatible with their job restrictions or doesn’t exist) and claws that amount out of their compensation.

This is deeply unfair (an injured worker recently called it “shitbaggery of the highest order” in a conversation) and is designed to benefit employers by reducing their claims costs, which, in turn, reduces their premiums. (Now you see why I’m skeptical of the WCB’s ability to fairly established criteria around psychological injuries.)

Return to Work Obligation
Bill 30 creates an obligation on employers to re-employ injured workers when they are able to return to their duties. This gives workers greater access to their right to disability accommodation under the Human Rights Act.

At present, workers’ only recourse if their employer sacks them after an injury is a lengthy (~2 years) process with the Human Rights Commission that won’t really provide any remedy. This process profoundly disadvantages injured workers because their injury-related disability disadvantages them in the job market (i.e., they can’t put food on the table because they get no compensation (thanks to deeming) or wages (thanks to the employer’s discrimination)).

If employers illegitimately don’t comply with their RTW obligations (e.g., sacking the worker without reason), the WCB must levy a financial penalty of up to a year’s salary, which can then be turned over to the worker. Employers are also required to continue health benefits for a period of time (which workers may use in addition to their WCB coverage).

This is a significant win for workers, reducing the chance that their employer will simply sack them once they are injured. Together with tighter controls on deeming, this should make things better for injured workers. How well this workers will turn on the degree to which the WCB can change its culture of denial.