Social media has given these forms of cultural expression wider circulation. Consider this example, from the Ontario Federation of Labour in response to Tim Horton’s miserly reduction in paid breaks to offset increases in the minimum wage. 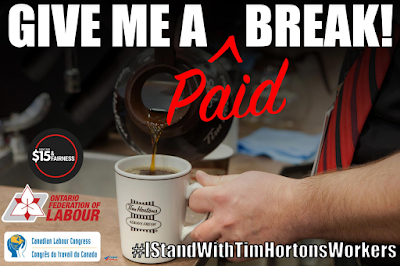 The backlash caused (in part) by online campaigns like this one included protests against the franchise across the nation.

The more interest memes are those generated by individual workers. While they are less polished, they often do a good job of conveying a complex idea. For example, consider this criticism of employer efforts to restructure work: 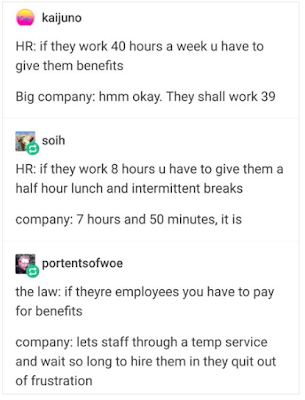 This pretty clearly illustrates that, whatever their mission statements may say about valuing workers, employers' true interests lie in making profits.

More complex dynamics can also be teased out. For example, one way to view health and safety regulations is that they determine the acceptable level at which employers can trade workers’ health (and lives) for profit. When you say it like that, most people roll their eyes and think “communist”. But you can make the same point like this: 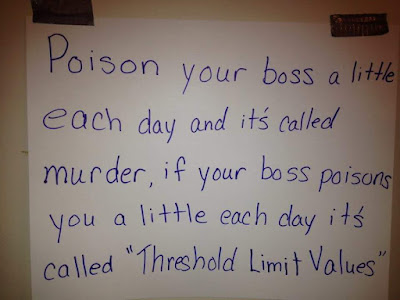 This meme clearly conveys the double standard in employment. The state allows employers to main and kill workers (up to point) by setting levels of exposure to hazardous substances. But if workers did the same the same thing to employers, the workers would go to jail. This kind of presentation often resonates with workers and causes them to re-evaluate their views.

Worker generated memes also have the potential to change the minds of employers. For example, employers often complain about and/or undermine (e.g., by stalling) the operation of the grievance process. Filing an unfair labour practice against the employer is one option. Another is to start posting memes such as this in the workplace. 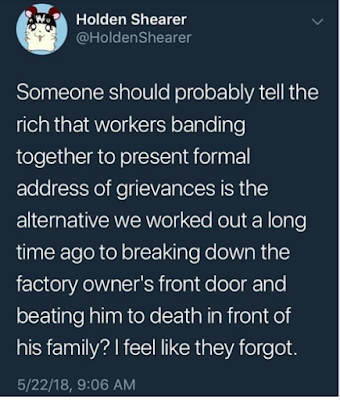 This highlights to employers that there certainly are alternatives to complying with the grievance process. But they aren't necessarily the most desirable options for employer, all told. Overall, I'm very encouraged by the potential utility of memes in labour education.