Perils of communicating directly with employees during bargaining

Employers engaged in collective bargaining can be tempted to communicate their bargaining proposals directly to their employees—essentially end-running the union bargaining team.

Employers typically do this for two reasons. They may hope their explanation will make their proposals more palatable to the workers. And they may seek to undermine the union bargaining team.

This approach has two main risks. First, employers may commit an unfair labour practice if their communication is found to constitute bargaining directly with employees. Second, direct communication may backfire by, for example, making visible discrepancies between what employers say and what they propose.

The data presented in support of this position is not particularly compelling. Consider this table, which purports to show a 154.4% increases in salary costs between 2005 and 2015: 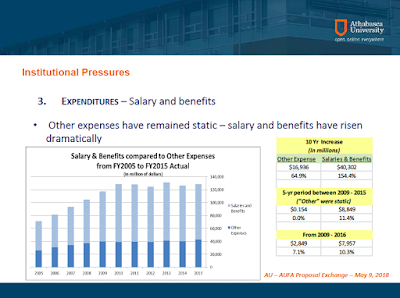 Three immediately obvious problems with this table are:
Sloppily handling cherry-picked data is a fundamental mis-step with a savvy worker group that does data analysis for a living.

The employer also sent along their opening proposal. A quick read shows the employer wants a wage freeze for the next two years. This is consistent with the employer’s desire to control expenses.

Nevertheless, the other 43 pages of proposed changes have nothing to do with improving AU’s finances. Rather, they are an attack upon the substantive and procedural rights of the union’s members.

Under the employer’s proposals:

In his covering note, Vice-President Matt Prineas characterizes these changes as

…reflect[ing] our desire to clean up existing language to better align to changes in the Alberta Labour Code, Alberta Employment Standards Legislation, to simplify a few processes for all of us, and to help us move forward together. We believe in you, we’re in this together, and we have no interest in disrupting your lives, the security of your families, or the progress of our students by being needlessly aggressive in bargaining. We’re working towards a win-win-win.

The problem with Prineas’s statement is that these proposals are not just house-keeping. Rather, they entail substantial and unacceptable losses for the workers (on top of yet another wage freeze).

They are also needlessly aggressive and, if pursued with any vigor, heighten the risk of a work stoppage.

Prineas's effort to candy-coat AU’s so-called “win-win” proposals further diminishes the vanishingly small amount of trust that AU staff have in their leaders.

An important question is who is giving AU this kind of labour-relations advice? So far this year, AU has been subjected to three unfair labour practice complaints and now it is rolling out a back-firing communications strategy.

Equally important is the question of why is AU’s executive accepting advice that seems destined to intensify labour conflict? Is it seeking to precipitate a strike by faculty? Or are these proposals simply an attempt to reframe bargaining such that a wage-freeze suddenly appears to be a desirable settlement to faculty?

Most lawyers in the labour relations field for employers seem to view this types of clients as money makers. Which is extremely unfortunate for those members with collective agreements within certain sector's.