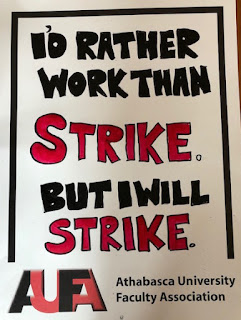 The HRC’s decision suggests they think they can drive a harder bargain at the table. The sticking points seem to be the duration of the contract and AU's unwillingness to contractually address its abuse of limited-term staff over the years.

Whether the BoG itself supports such a decision is unclear because the BoG was never given a chance to vote on the proposal. (Indeed, the Bog seems to be completely in the dark about bargaining. And, oddly, AU ratified a similar contract with its support staff recently.) This rejection moves AU and AUFA one step closer to a work stoppage that will be profoundly harmful to AU and its students.

In the short term, AUFA continues to try to get an essential services agreement (ESA) so it can move towards formal mediation (the parties are at the Labour Board on this issue on April 8). There has also been one additional date of bargaining set (April 15).

Absent a move by the employer, I would guess AUFA would be looking at a strike vote in June and (if the vote passes) a work stoppage in mid-September. AUFA will also commence information picketing in the next two (or three) weeks (presently awaiting advice on if and how the Elections Act may affect AUFA’s choice of targets).

It is a shame AUFA must attack AU’s reputation as an employer in public because talk of a work stoppage will almost certainly affect enrollments in the medium term. But that’s where the HRC’s rejection has left the union and is apparently damage they are willing to risk.

The most interesting discussion among AUFA members has been focused on the New Democrats' role in the current impasse. Many AUFA members wrote their MLAs, concerned about where AU’s behaviour was taking the institution. After a lengthy delay, they received a form-letter response form then-Minister of Advanced Education Marlin Schmidt in late February.

1. The government moved PSE bargaining under strike-lockout without the promised preparatory period (indeed, some bargaining was moved retroactively). This provided employers with a significant advantage that, according to one ND MLA, should result in lower wage settlements.

2. The government has given institutions a bargaining mandate. AU prevaricates about this, but there is clear evidence that other institutions received a mandate for at least a wage freeze. Government staff are monitoring bargaining closely. And, I’m told, institutions risk funding consequences if they deviate from this mandate.

So, while the government claims its hands are tied, the NDs have certainly intervened on the side of employers in order to get two years of zeros (with future wage changes to be determined through further negotiations).

It is not lost on workers that, despite improving Alberta’s labour laws, the NDs have been no friend to labour on bread-and-butter issues. Rank-and-file unionists have been grumbling about this for awhile. Recently, Alberta Union of Provincial Employees present Guy Smith told Maclean's “There’s nothing compelling [workers] to go to the ballot box with their head held high, marking an X for the NDP."

An AUFA member opined last week that we’ve done better bargaining under conservative governments than we have under the NDs. Another AUFA member flagged that wage freezes allows the NDs to reduce their deficit (for political gain) without having to raise taxes—in effect, the NDs have externalized a greater portion of the cost of government onto public-sector workers.

Given how terrible the conservatives are, it’s unlikely that this will translate into public-sector workers voting conservative en masse. But pent-up demand for wage increases to match inflation does identify a likely area of contestation regardless of who forms the next government.

How can students get involved? How do we organize/mobilize in support of faculty? How can we make a positive impact on AU decision-making?

Thanks for your question and your support, Anonymous.

Both organizations have representatives on the AU Board of Governors, which is ultimately responsible for the institution’s behaviour. You could also contact the Board chair with your concerns. Access to the chair is mediated through the University Secretary (Carol Lund, caroll@athabascau.ca). If you decide to email, you should ask for confirmation that your concern was actually passed along to the Board chair.

I hope that is helpful.